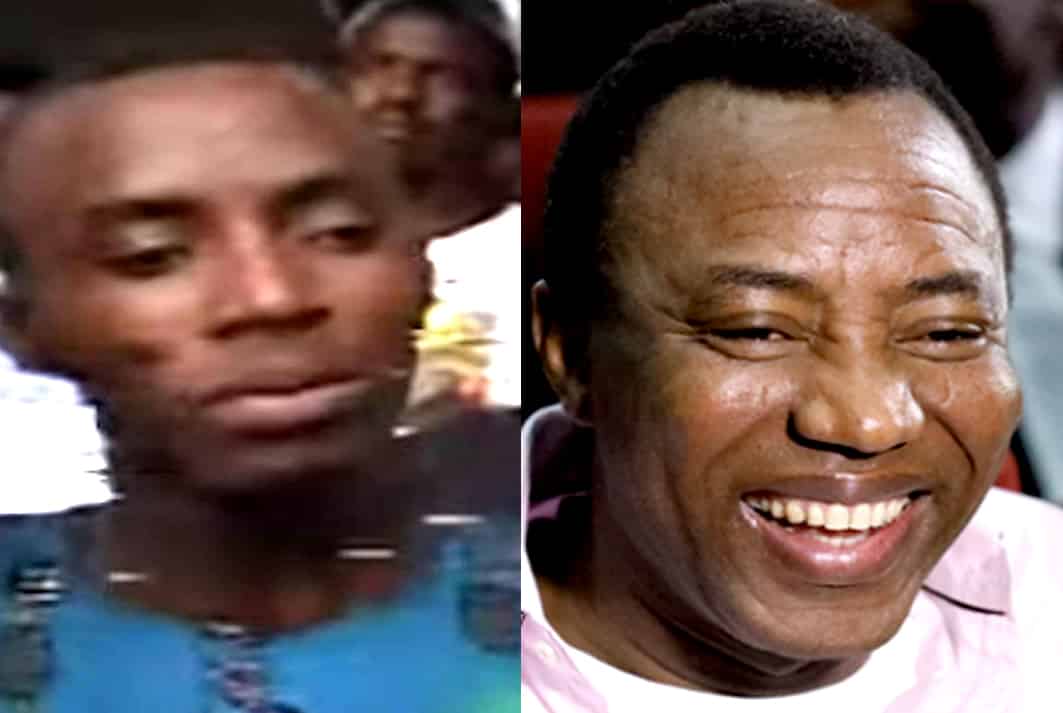 Childhood Biography presents the Full Story of a Human rights activist with the nickname “Sho Baba“.

Our version of Omoleye Sowore’s Biography Facts, including his Childhood Story, brings you a full account of notable events from his boyhood days to date.

The analysis of Sowore’s Bio involves his early life, family background. His life story before fame, rise to fame story.

More so, Omoleye’s wife, personal life, family facts. His lifestyle and other little-known facts about him.

Yes, everyone knows of how he organized a protest tagged “RevolutionNow”. A protest that got him arrested by the Nigerian Department of Security Services (DSS).

However, only a few consider Omoleye Sowore’s biography, which is quite interesting. Now, without further ado, let’s begin.

For Biography starters, Omoyele Sowore was born on the 16th day of February 1971. He was born to his mother, Madam Esther Kehinde Sowore, and father, Mr Sowore, in the Niger Delta region in Nigeria.

Sowore is one among seventeen children born to his father, Mr. Sowore. His Dad had several other wives, including Mrs Esther Kehinde Sowore.

Family Origin and Growing Up Years:

The Nigerian national of West African ethnicity with Ese-Odo family roots was born into a polygamous family background and hails from Ondo State, Nigeria.

He was raised at his place of birth in the Niger Delta. Where he grew up with his sixteen siblings, of whom little information is known about. 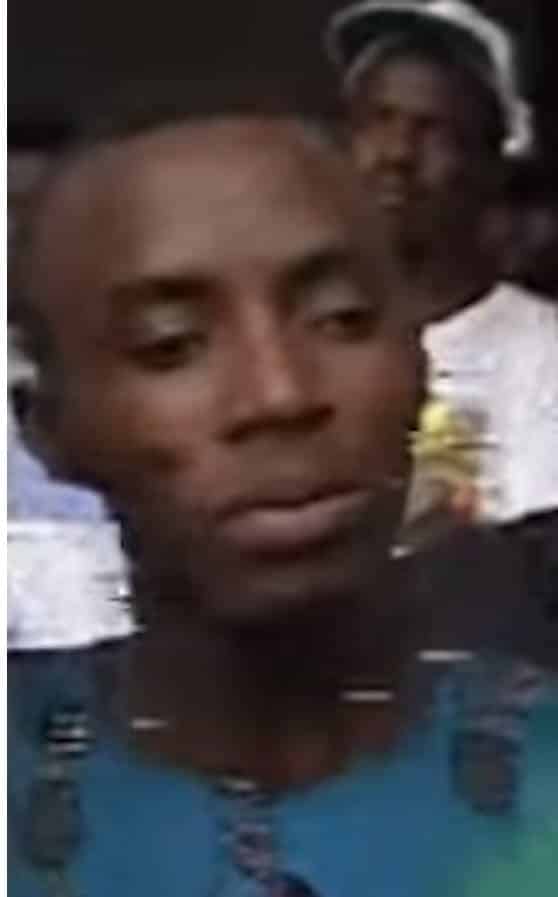 As a child, Sowore was concerned about the techniques that were implored by fishermen in his area for catching fish, as the source of many people’s livelihood was based on fish farming.

He was a cheerful kid and would never miss the opportunity of playing with his siblings. As well as other kids in his vicinity.

Sowore’s interest in fishing was about to be fulfilled as he started to learn how to ride a motorcycle.

By the time he was 12 years old, he had learned how to ride a motorcycle with which he would go to the lake to fish for his entire family every morning before going to school.

Although there has been no information documented about the High school he attended, Sowore had a formal education.

In order to meet up to some school expenses, Sowore had to invest more time in fishing.

Owing to the fact that colleges were not numerous during his secondary school days, Sowore had to travel a long distance every day to attend his school.

Life in High school was tough for Sowore, but he endured till the end and soon after his graduation from high school, he enrolled at the University of Lagos (UNILAG), where he studied Geography and Planning. 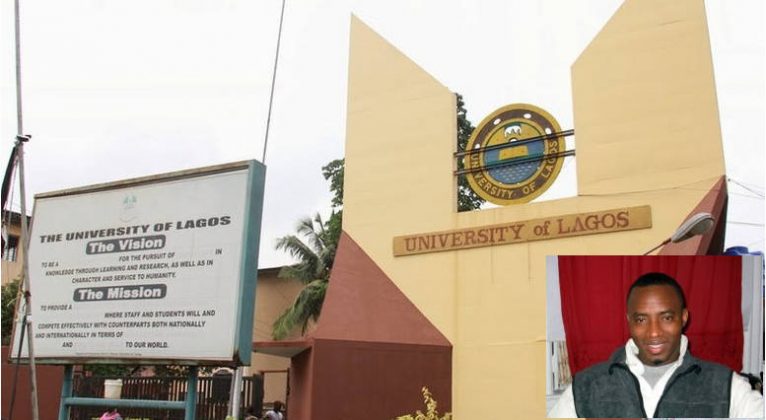 While at the University of Lagos (UNILAG), Sowore rose up to the position of the President of the Student Union Government (S.U.G), thus the beginning of his expeditions.

He maintained his post as the S.U.G president from the year 1992 to 1994 and had his academic program extended by two years after he was expelled twice for political reasons and student activism.

As part of the Student Union Government, Sowore was determined to put a stop to crimes. Especially on the activities of cultism. This has been a problem for so many students at the University.

His conviction to resolve the pressing issues of cultism and excessive corruption in the University prompted him to launch an anti-cultist and anti-corruption campaign while he was still the president of the S.U.G. 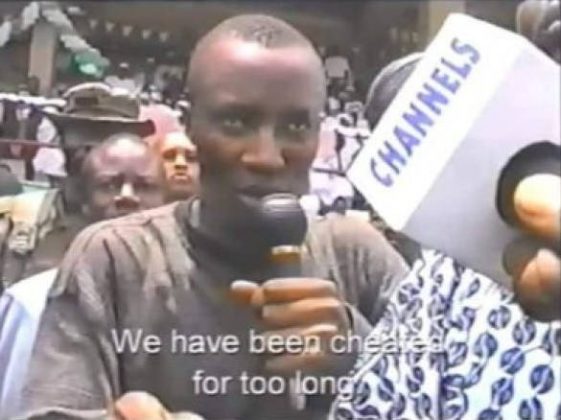 Sowore’s action in trying to eliminate the cultist groups which he believed to have become a poison to the life of so many students had some consequences attached to it.

The cultist groups were not willing to stay put as they were been pushed to the wall, so they also decided to retaliate as they felt like a war has already been declared upon them by the Students Union Government (S.U.G).

On a fateful day in 1994, some of the cultist groups in UNILAG took it upon themselves to strike the brain behind the anti-cultism campaign, so they attacked Sowore, who could not effectively protect himself.

He was brutally beaten by them, after which they had him injected with Lead which was a highly toxic element. Sowore, fortunately, survived the incident that would have cost him his life.

For Sowore, the need to make the world a better place by dealing with unethical and irrational groups in the society was the major motivation that fueled the protest he organized against the Nigerian government in 1992.

He also organized several other protests against the government during the military dispensation. Following his graduation from UNILAG in 1995, Sowore enrolled for a master’s program in Public Administration at the University of Columbia.

He soon started Sahara Reporters in a small room in New York City, with the sole purpose of fighting against corruption and wrong government practices. 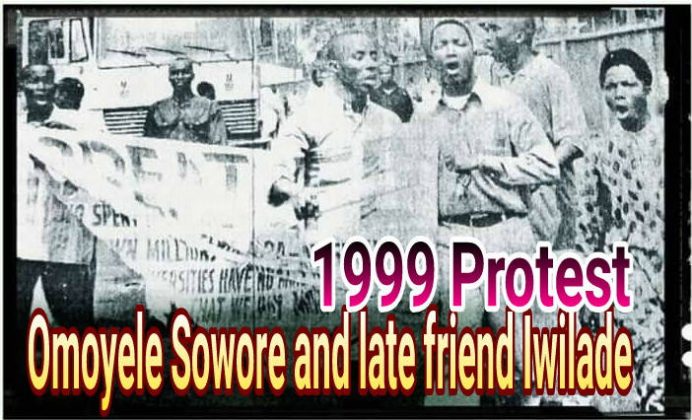 On the 12th day of June 1993, Nigerians came out in mass to participate in the country’s first-ever democratic general elections.

Fourteen million, two hundred and ninety-three thousand, three hundred and ninety-six (14,293,396) votes were cast of which MKO Abiola the flag bearer of SDP emerged the winner with a 58.36% votes defeating Bashir Tofa of the NRC who had the remaining 41.64% votes.

MKO Abiola would have been the first democratic president of Nigeria but the then Head of State, Gen.

Ibrahim Badamasi Babangida announced the election victory annulled. This resulted in a protest of which Sowore was also involved, leading to his arrest, detentions, torture and several life-threatening treatments by the government. 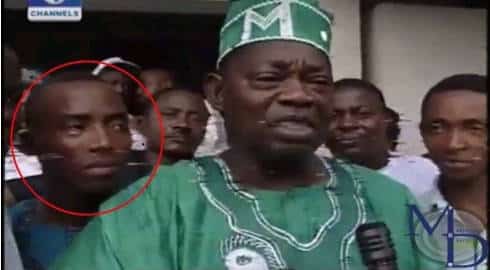 Sowore’s political involvements never ceased. Fast forward to the time of writing this bio, Sowore is the founder of the African Action Congress (AAC) and ran as the presidential candidate for his party in the 2019 Nigerian general election, which he lost to Muhammadu Buhari. 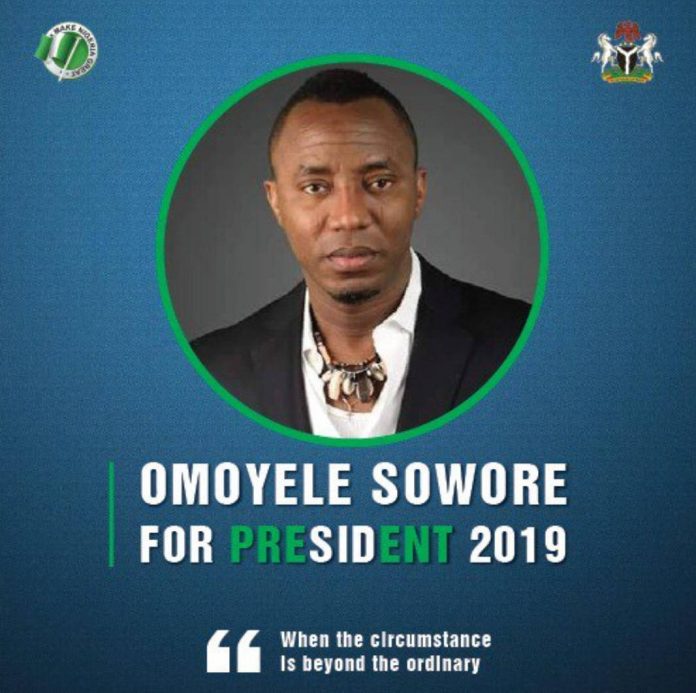 Further on, he was arrested by the DSS on the 3rd day of August 2019 ahead of the #RevolutionNow protest he had organized in 2019.

He still maintains his belief and conviction even in the face of death threats and brutal maltreatment and has risen to fame through all of his protests against corruption. The rest, as they say, is history.

Regarding his relationship status, Omoyele Sowore is married at the time of writing. Sowore walked down the aisle and tied the knot with his heartthrob, Sowore, on the 11th day of September 2004.

The marriage union of Sowore and his wife gave rise to the birth of their children. We have little information about them.

His wife, Opeyemi Sowore, disclosed to the press that all her children want for Christmas is for their father to be released after he was forcefully re-arrested during his court hearing in the month of December 2019. 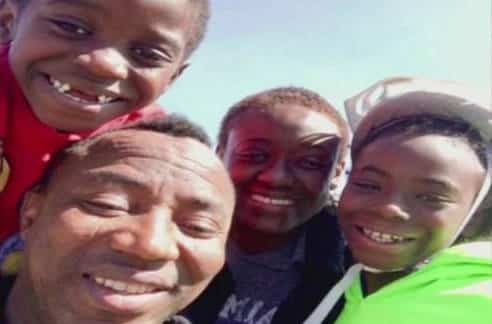 Omoleye Sowore comes from a middle-class family background. We bring you facts about his family life.

About Omoyele Sowore’s father and mother:

Although not much information is known about Sowore’s mom and dad, his mother has been pleading with the government to release her son as she claims that her son has always spoken the truth against evil since he was a child. 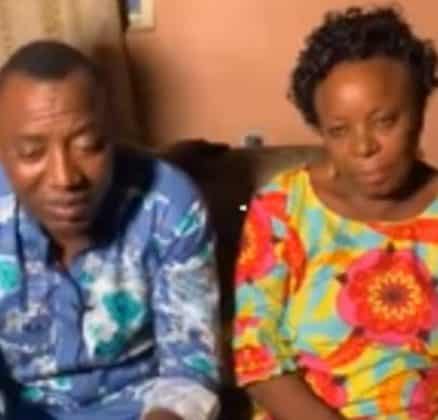 About Omoyele Sowore’s siblings and relatives:

Omoleye Sowore, who was born into a polygamous family, has sixteen siblings. There has been no press documentation or official statement made about his brothers and his sisters.

Away from Omoyele Sowore’s activism and political endeavours, we bring you more facts.  We’ll tell you about his personality in order to give you a complete picture of him.

To begin with, Omoyele Sowore’s persona is a blend of Aquarius. And he always sticks to his conviction right till the very end. This is a characteristic which is befitting of his Zodiac Traits.

Sowore has been so bent on changing society and helping it thrive to survive from the corruption of its leaders and the government that he seldom talks about his hobbies and interests aside from attaining a truly just and peaceful democratic society. 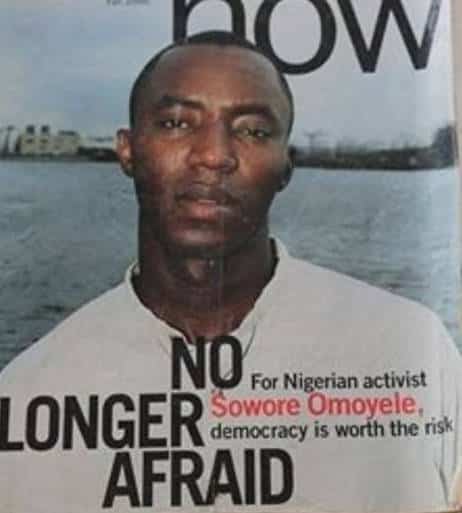 Sowore has an estimated net worth of $10 million at the time of writing. The origin of his wealth stems majorly from his News station – Sahara Reports.

While analysis of his spending patterns depicts that he does not live a luxurious lifestyle. The Activist dedicates most of his time to his activism.

No information has been disclosed to the press by Sowore regarding his houses, cars and other assets.

Omoleye Sowore had been allegedly accused of receiving a bribe of a house. This house is located in California and worth $5 million. The bribe is alleged to come from the All Progressives Congress (APC) in 2014.

He openly denied the accusation stating that he had never received any bribe in his entire life. He referred to the accusation as a means by which his accusers intended to use in blackmail him.

To wrap up Omoyele Sowore’s childhood biography, here are some lesser-known facts.

Omoyele Sowore was born into a Christian family. He has in several occasions advised Christians regarding political issues.

His view on Politics depicts that elections should not be centred on religious sentiment, and as a result of this perception, he has been seen praying in the mosque with other Muslims. 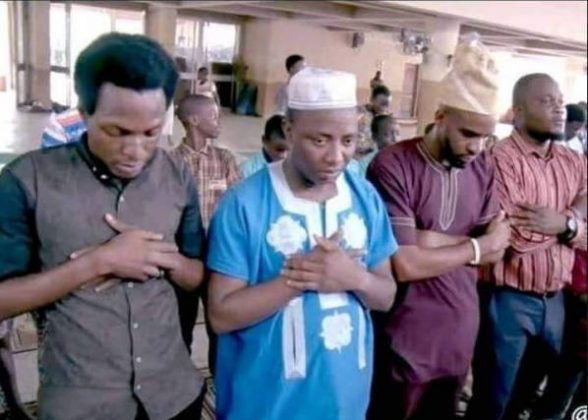 Omoyele Sowore does not smoke and has not been caught drinking either. He has always aired out his view on the popular Nigeria Indian Hemp – Igbo (weed).

He advised Nigeria to concentrate it’s attention on utilizing the weed produced in the country to improve its GDP, as weed can be exported for pharmaceutical use.

Omoyele Sowore, in 1998  declared the Military persona grata at the burial of M.K.O Abiola and stated clearly that Abiola’s sons had failed Nigerian youths. 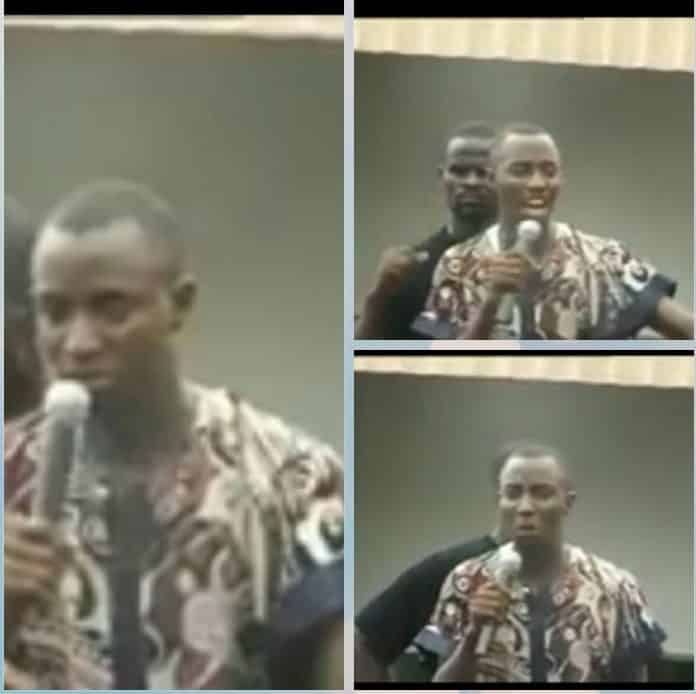 Omoleye Sowore was arrested by the DSS on the 3rd day of August 2019. The arrest came before his planned #RevolutionNow protest. He was released on bail following a court order. He was yet again detained under controversial circumstances.

During the court hearing on the 6th of December 2019, a tussle broke out. Agents of Nigeria’s Department for State Security (DSS) attempted to arrest Sowore. That resulted in a scuffle that involved his lawyers.

Following the incident, Femi Falana, one of Nigeria’s most prominent lawyers and lead of Sowore’s legal team, confirmed that the activist has been detained and is now back in the DSS custody. 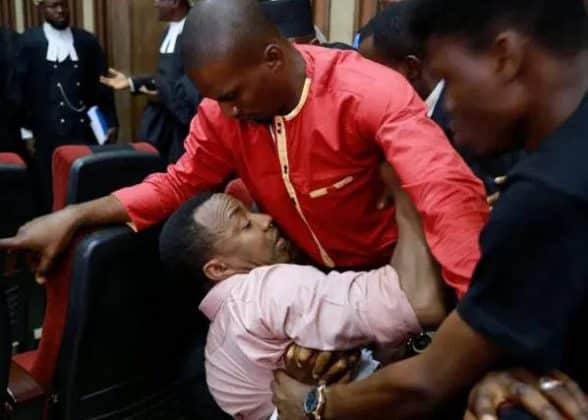 Thanks for reading our Omoleye Sowore Childhood Story, plus untold biography facts.

At childhood biography, we strive for accuracy and fairness in our quest to deliver you the biography of Nigerian Politicians. Kindly stay tuned for more! The Life History of Bukola Saraki, Peter Obi will excite you.