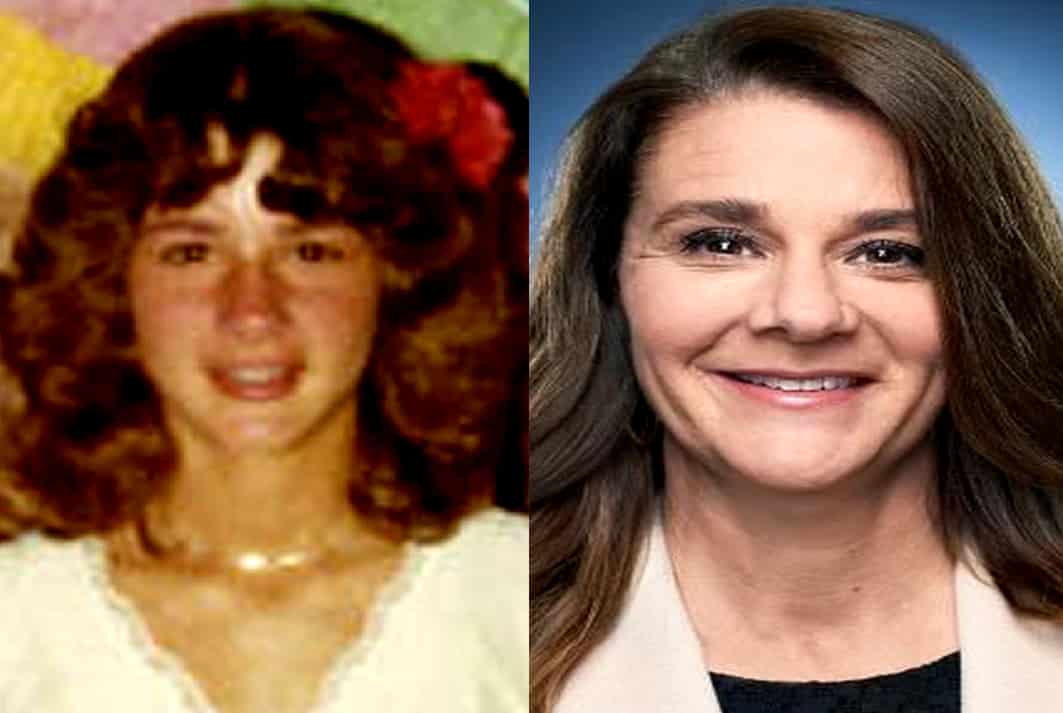 Our Biography of Melinda Gates portray Facts on her Childhood Story, Early Life, Parents, Family Life, Husband, Marriage, Personal Life and Lifestyle. It’s a full analysis of notable events starting from her youthful days to when he became Famous.

Yes, we all know that she is the wife of one of the wealthiest men on the planet. However, only a few consider Melinda Gates’s biography, which is quite impressive. Now, without further ado, let’s begin.

Melinda Ann Gates was born on the 15th day of August 1964 to her mother, Elaine Agnes Amerland, and her father, Raymond Joseph French Jr., an aerospace engineer at Dallas, Texas. She is the second of four children born of the union between her parents.

In her childhood days, Melinda was a brilliant kid who could quickly solve problems that turned out to be difficult for her age group. Back then, she was often ready to learn new things. She soon amassed a ton of knowledge in basic sciences at a tender age.

One of the bedrock that has fostered the talent we see in Melinda today is basically her upbringing. Melinda Gates’ family background has severely affected her school of thoughts in many spheres of her business life.

Being born into a middle-class family background, Melinda learned a lot from her father, who was then an engineer.

Furthermore, she came to an understanding of the principles of home management while carrying out some specific house chores.

Over time the young American acquired much experience on how to manage resources at home. Today, you can see how well she handles her business endeavours.

She was raised at her birthplace alongside her elder sister and two younger brothers. Growing up in Dallas, Melinda was a happy kid that cared less about trivia things but gave more attention to complicated problems.

Life was getting interesting as she got enough attention from her dad, who often tutored her on some arithmetic problems.

In addition to her hunt for knowledge in her early life, Melinda was a church girl back in the days. Yes! she was raised in the Roman Catholic faith and always made out time to attend mass and other church activities after school.

Melinda was enrolled to study at St. Monica Catholic School, where she graduated as the top student of her class.

You heard that right, the best student! She was not merely intelligent; rather, she was super talented and brilliant.

The extent to which Melinda invests her time in studying makes you want to bet on her future success.

By the time she was 14 years old, she was introduced to Apple II by her dad. She soon developed an interest in computer games as well as the BASIC programming language.

Geniuses have often been affiliated with computer geeks. Melinda soon proved this theory right and went on to barge a bachelor’s degree in computer science and economics from Duke University in the year 1986.

During her university days, she became a member of the Kappa Alpha Theta sorority, Beta Rho Chapter. While preparing for a blast in her career life, Melinda acquired an MBA at Duke’s Fuqua School of Business in 1987.

Many people have no idea of how dedicated and consistent Melinda has been throughout her days at the University.

All she could perceive is the gentle whisper of her success story at the end of her sacrifices and consistency in studying.

Melinda never neglected any opportunity that presents itself to her after her graduation. She started up her career as a mathematics and computer programming tutor to children.

Wow! What a nerve she’s got there. Many people would probably refuse such an appointment with the notion that it doesn’t measure up to their qualifications. But, heck! She took the job anyway.

Not too long after working as a tutor, Melinda got a new job at Microsoft and started working as the marketing manager. She was responsible for directing the development of several multimedia products.

Her portfolio continued to improve as she climbed up to the post of the General Manager of Information Products at Microsoft. Her efforts over time have earned her several recognitions and awards worldwide.

Fast forward to the time of writing Melinda Gates Biography, she is now a world-renowned figure who has tirelessly worked to attain the level of financial breakthrough she’s acquired today.

In 2014, Bill and Melinda donated US$28 billion to their foundation. About a year after that, Melinda founded Pivotal Ventures as a separate organization that is independent of her Foundation. The rest, as they say, is history.

Being an influential and wealthy woman, a lot of inquiry has been made about Melinda Gates’ love-live. Below are answers to the most common questions relating to Melinda’s dating life.

Who was Melinda Gates’ Boyfriend?

One of the information that can hardly be found on the internet is that of Melinda Gates’ past affair. Her dating background seems to be pointing to the fact that she’s never had a boyfriend before meeting Bill Gates.

However, in her book titled; The Moment of Lift: How Empowering Women Changes the World, Melinda spoke about her past relationship.

The businesswoman stated that she had been in an abusive affair before meeting the world-renowned billionaire.

Although she had not spoken to anyone about the experience, she, however, revealed a glimpse of the situation in her book.

She met her spouse, Bill Gates at a trade fair in New York after which they started dating in 1987. Before their love story began, Melinda had maintained a formal boss-employee relationship with Bill Gates.

After 7 years of dating, the two love birds decided to tie the knot in a private ceremony held in Lanai Hawaii. It all happened on New Year’s Day 1994.

Among all the events on their wedding day, the favourite was the time for cutting the cake.

Bill thought he was meant to cut a slice for everyone and he did some astonishingly quick math to calculate exactly how big each slice should be.

Upon realizing what was happening, Melinda laughed so hard she couldn’t speak. Click play twice to play the video below.

Being married to one of the wealthiest men on earth didn’t stop Melinda from aiming to achieve greatness in her own career.

Although she left Microsoft to focus on raising her family, Melinda soon debuted as an author in 2019 with the release of her book; The Moment of Lift: How Empowering Women Changes the World.

Her marriage to Bill Gates was blessed with three beautiful kids. Melinda now has two daughters and a son. Her children are; Jennifer Katharine Gates (the eldest child), Rory John Gates (her only son), and Phoebe Adele Gates (the youngest child).

For the Billionaire’s wife, success and achievements would have been impossible if not for the supports of her family.

In this section, as we give you interesting facts about Melinda Gates Parents as well as every member of her family life. We start with her mother.

Elaine Agnes Amerland is Melinda’s mom. Her mother was a homemaker and spent time taking care of Melinda and her siblings. When the question about Melinda’s kind personality arises in your mind, you should come to a realization that her mother is the secret behind her morals.

Raymond Joseph French Jr. is Melinda’s dad. He was an Aerospace engineer. Being fully aware of his daughter’s intelligence, Raymond ensured that he enlightens his child about computer-related activities.

Did you know?… Melinda’s father also sought other sources of income to meet up to the needs of his family. He ventured into renting business as a side job in addition to his engineering works.

Melinda Gates has two younger brothers as well as an elder sister. Surprisingly, she has not mentioned the names of her siblings since she came to the limelight of fame. Beyond every doubt, Melinda’s brothers and sister would have supported her in her endeavours.

The information about Melinda’s paternal grandparents, as well as her maternal grandfather and grandmother, has been sparsely available on the web.

Since no information is known about her siblings, it has become quite impossible to gain valid data about her nieces and nephews.

What does Melinda Gates do in her Private Time?

Away from her too many business endeavours, Melinda Gates has got a handful of exciting routines and hobbies. She plays tennis, pickleball, and the board game (Settlers of Catan) with her entire family.

Melinda’s persona is a blend of Leo Zodiac traits. She is passionate, charismatic, and dynamic, a characteristic that is worthy of her zodiac blend.

Furthermore, Melinda’s determination in helping the needy simply explain her desires in advancing the equity in this world.

Being married to one of the wealthiest men alive depicts that Melinda has got enormous wealth. Her net worth was estimated to be a whopping sum of $70 billion.

The origin of her wealth stems mainly from her business endeavours. Looking into her lifestyle, you would realize that even though she spends money on luxury, she is quite charitable.

In 2020, Melinda and her husband purchased a luxurious mansion worth $43 million. The house contains six bedrooms, four toilets, and spans 5,800 square feet.

Living in such a comfortable abode is a lifestyle befitting of the billionaire. Take a look at her mansion below.

Although the love bird closed the deal of their $43 million house in 2020, they also had numerous luxurious buildings in their assets.

One of the most notable mansion belonging to Melinda Gates Family is the Xanadu 2.0 which span 66,000 square feet. The building which was estimated to be worth $123 million is pictured below.

There is no doubt that Melinda owes several luxurious cars that she uses for her business and personal endeavours. However, there has been no official documentary of her car collection. See how upright she looks as she drops from one of her cars below.

To wrap up our Melinda Gates Life Story, here are some lesser-known facts that would help you get a full grasp of her Biography.

After numerous contributions and strides for the improvement of women’s health across the globe, Melinda has been ranked as the sixth most powerful woman in the world by Forbes.

As incredible as it may sound, Melinda’s foundation contributed to a 57% drop in maternal deaths in Ethiopia over the past 30 years.

Melinda Gates had disclosed in one of her interviews that she often wakes up at 6:30. She spends the first hour of her morning observing her quiet time. Just after meditating, Melinda does some stretching, yoga, and some spiritual reading.

Fact #3: About the Gates Foundation:

It would interest you to know that our famous female billionaire and her husband have made numerous contributions to improving the standard of living of many people.

Melinda has travelled across different countries of the world to help the less privileged. Take a look at the picture of her and Bill Gates on one of their charity expeditions.

Melinda Gates is a Christian and was born into a catholic family. She has always acted out of the consciousness of her religion’s code of conduct. On one occasion, Melinda remarked;

“I’m living out my faith in action”.

Sometimes in research, your aim would be to get quick and concise information. Our Wiki Table below summarizes Melinda Gates’ Biography. Find below;

Thanks for reading the Childhood Biography version of Melinda Gates Life Story. More so, thank you for believing in What we are and What we do.

While putting up this article on Melinda Gates Biography and Childhood Story, our editors were on the watch for accuracy and fairness.

Kindly place your comments or contact us if you see something that doesn’t look right on this article about her. If not, kindly tell us what you think about our write up and her person.