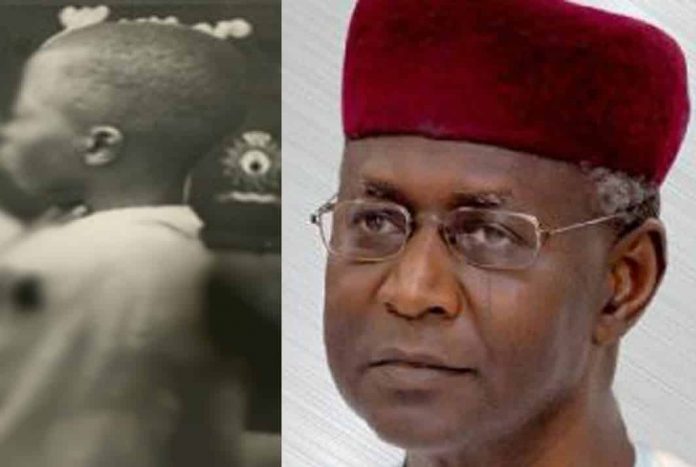 It’s a tale of notable events in his Bio. Now, without further ado, let’s begin.

For Biography starters, the Late Abba Kyari (appointed Chief of Staff to Muhammadu Buhari) was born a few years before the independence of Nigeria during the British colonial era.

The late chief of staff grew up in a Muslim family background of Kanuri ethnicity. He has his family roots linked to the indigeneship of Borno State, which is a northeastern state in Nigeria.

Early on, Kyari was constantly encouraged by his parents to uphold a high level of respect.

Being born into an Islamic family background, he was enrolled to learn more about his Islamic faith at an Islamic school which was attended by virtually all the Muslim kids in his childhood neighbourhood.

Growing up in the northern part of Nigeria, Late Kyari had to observe his five daily prayers as a diligent Islamic kid. Back then, he would often run along on the streets with his friends to play during his spare time.

As a young boy, Kyari was raised alongside his brothers and sisters. He learned a lot while handling the issues that arose between him and his siblings.

It would interest you to know that his diplomatic way of dealing with issues may have been acquired long before he delved into his professional career. This feat is among those responsible for his rise.

By the time Abba Kyari came of age to study, he was enrolled to study in an undisclosed primary and secondary school.

After studying for several years, Kyari rounded up his primary and secondary school education and went on to further his studies at the University of Warwick where he studied Sociology.

During his studies at Warwick, Kyari gradually observed the society as well as the social interactions and lifestyle of people within the society.

The prominent politician was amused by how people could easily get into a disagreement over trivial issues as a result of indifference in their personal opinion.

Digging more into sociology, he became determined to resolve conflicts in society. Hence, he delved into studying law immediately after his graduation from the University of Warwick.

Convinced by the fact that he still needs to build up his knowledge in Law, Abba Kyari went on to study at the University of Cambridge, where he obtained his master’s degree in law in the year 1984.

He soon returned to Nigeria and started practising his profession. Did you know?… Kyari worked for the law firm “Fani-Kayode and Sowemimo” upon his return to Nigeria and later accepted a job offer at the New Africa Holdings Limited Kaduna.

Rising to the world of fame was never an easy journey for Abba Kyari as he needed to build his professional portfolio by working and handling responsibilities in different reputable organizations.

Consistency and diligence saw Kyari through the times of struggles until he was appointed to serve as the Commissioner for Forestry and Animal Resources in Borno State in the year 1990.

His trustworthiness became a basis that ushered him into working as the secretary of the board of African International Bank Limited from 1990 to 1995.

Did you know?… Kyari utilized his managerial expertise. By serving as the executive director. In charge of management services at the United Bank for Africa. He soon became the chief executive officer of the same bank just like the former emir of Kano, Sanusi Lamido Sanusi.

Fast forward to the time of writing this bio, the late Abba Kyari has been an influential political figure in the democratic dispensation of President Muhammadu Buhari.

He was appointed as the Chief of Staff to President Muhammadu Buhari in August 2015. He was soon awarded the Officer of the Order of Niger (OON).

This is a National honour in Nigeria – as a result of his profound contribution to the national affairs of the country.

The relationship life of Kyari revolved around the world of sociology. As he was married to the sister-in-law of Ibrahim Tahir. Who was a sociologist before venturing into politics?

Also, the marriage of Abba Kyari and his wife resulted in the birth of four children.

The most notable of Abba Kyari’s children is his daughter Aisha Abba-Kyari. Whom we shall be talking about shortly.

In this section, we will throw more light on the Late Chief of Staff’s family members, starting with his parents.

Although the Chief of Staff has attained a great height of fame in the political system of Nigeria, he has kept too much information about his family private.

Abba Kyari built his home into a wealthy class family life but says little about his father as well as his mother.

Abba Kyari’s Children- Daughter and Others:

Aisha Abba-Kyari is Abba Kyari’s daughter. She is a very intelligent and educated young lady who has attained quite a tonne of achievements in her early years.

Owing to her academic qualification, Aisha was appointed as the Assistant Vice-President. At the Nigeria Sovereign Investment Authority (NSIA). Presently, little is known about his other children.

Living in his early 70s, Abba Kyari does not involve himself in communicating through several social media platforms, hence, he seldom talks about his siblings and relatives.

Many people have been less concerned about Abba Kyari’s ancestry. Thereby losing interest in knowing about his paternal grandparents. As well as his maternal grandfather and grandmother.

More so, it is quite unfortunate nothing is known about his uncles. And aunts, as well as his nephews and nieces. Despite the fact that he is a powerful politician in Nigeria.

What makes Abba Kyari thick?… Sit back as we bring you makings of his personality that you seldom hear about in his personal endeavours. His utmost loyalty to the president of Nigeria (Buhari) depicts that he probably had inherited the Taurus Zodiac traits.

Abba Kyari’s relationship with the president of Nigeria, President Muhammadu Buhari, goes beyond the boss-employee relationship as they are very close friends.

More so, for students of the science of power, Abba Kyari is a classical study of an aide who has redefined loyalty, selflessness, and commitment at their best.

To wrap up our Abba Kyari childhood story and biography, here is a lesser-known fact about him that will help you grasp a complete picture of his bio.

His relationship with Femi Fani Kayode:

Femi Fani Kayode, who is the former Minister of Aviation, is a very close friend of Abba Kyari. In the face of several controversies raised by Kyari’s appointment, Fani Kayode congratulated him for his new appointment.

Fani, a chieftain of the PDP, described Kyari as a good man who can discharge his duty with all sincerity.

He was also one of the first people who confirmed that Kyari tested positive when he undertook the test for the COVID-19 virus. Below was his upload on his Twitter handle in the early hours of March 24th, 2020;

“I just confirmed that my old friend & brother Abba Kyari, Chief of Staff to Pres. Buhari has tested positive to COVID-19. I sincerely & honestly wish him well & pray for a quick recovery for him just as I do for all other Nigerians that have tested positive, including Atiku‘s son.”

It all happened in the early hours of March 24, 2020. it was disclosed to the general public. That Nigeria’s Chief of Staff, Abba Kyari, tested positive for COVID-19.

His test result came in on the 23rd day of March. Following his return from an official trip to Germany. A trip that was aimed at helping Nigeria find a solution to her electricity problem.

Kyari was quickly moved from Abuja to Lagos on the 29th day of March 2020. Proper care and treatment have consistently been given to him. To ensure he gets back on his feet again. Those suspected to have been exposed to Kyari were advised. To self-isolate in the meantime.

Sadly, Femi Adesina- Nigeria’s special adviser on media and publicity to President Muhammadu Buhari, confirmed that the country had lost the former chief of staff in the early hours of Saturday (18th April 2020).

Finally, on Late Abba Kyari’s Biography, we’ve found it worthwhile. To give a brief background. About the three famous personalities bearing the name Abba Kyari.

The first Abba Kyari is Late Brigadier Abba Kyari. Who is the former military administrator to North Central from 1967 to 1975.

He is the biological father to Senator Abubakar Kyari (Senator representing who won the 2019 elections for Borno north).

The second, Abba Kyari, is the former Managing Director of U.B.A and late Chief of Staff to President Buhari. Finally, the third, Abba Kyari, is a renowned Nigerian police officer, a nightmare of kidnappers and a top crime-buster.

Thanks for reading our Childhood Story plus untold biography facts and believing in what we do and who we are.

At childhood biography, we strive for accuracy and fairness in our quest to deliver Politician Biographies. The Life History of Robert Mugabe and Peter Obi.

If you see something that doesn’t look right in this article on Late Abba Kyari, please place your comment or contact us!