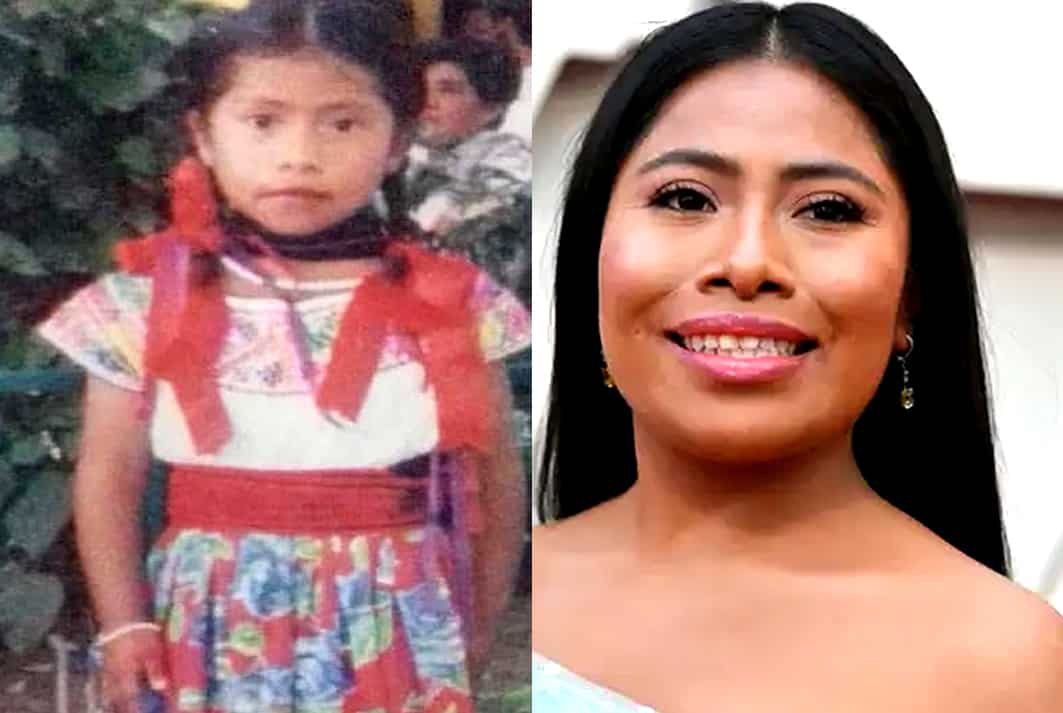 In simple terms, this is a story of her Life Journey, from his youthful days to when he became famous.

Yes, everyone knows she is one of the fast-rising actresses best known for her role in the 2018 drama film “Roma“.

However, only a hand few of fans consider Yalitza Aparicio’s biography, which we’ve prepared, and it’s quite interesting. Now, without further ado, let’s begin.

For Biography starters, she is nicknamed “Cleo“. Yalitza Aparicio Martínez was born on the 11th day of December 1993 to her mother, Margarita Aparicio (a nanny), and father, Raul Bautista Aparicio (a street vendor) in the city of Tlaxiaco, Oaxaca.

The fast-rising actress was born as the second daughter of five children, to her lovely parents.

Did you know?… Yalitza Aparicio as a child, suffered from speech impairment. Thankfully, she began speaking fluently when she was seven.

Judging from her childhood photo above, it appears Yalitza Aparicio’s parents raised her in adherence to native Mexican culture, customs, and traditions.

By her looks, you could easily tell or depict her origin or where she came from. Truth is, Yalitza Aparicio’s family is of an indigenous Mexican origin.

According to research, Yalitza Aparicio’s family origin is a blend of two native Mexican ethnic groups. Her father belongs to the Mexican Mixtec ethnicity and her mother is of Trique ethnicity.

A view of Yalitza Aparicio’s parents would tell you they are likely Mexicans by origin. Both (pictured below) have so grown so deep into their marriage to the extent of even looking alike.

Yalitza Aparicio’s dad and mum were like the below-average Mexican citizens who worked but didn’t have the best financial education and oftentimes, struggled with monies to keep everyone in their family home up and well-doing.

The beautiful actress grew up in Tlaxiaco, a city located in the temperate valley around the Sierra Mixteca mountainous region.

Below is a map that shows the area where Yalitza Aparicio’s family resided, an area which is 270 miles southeast of Mexico City.

As a child, Yalitza Aparicio’s family lived in a small stack built by themselves out of scrap wood, iron, and railway sleepers. The emotional photo of her family home tells a lot about her poor upbringing. 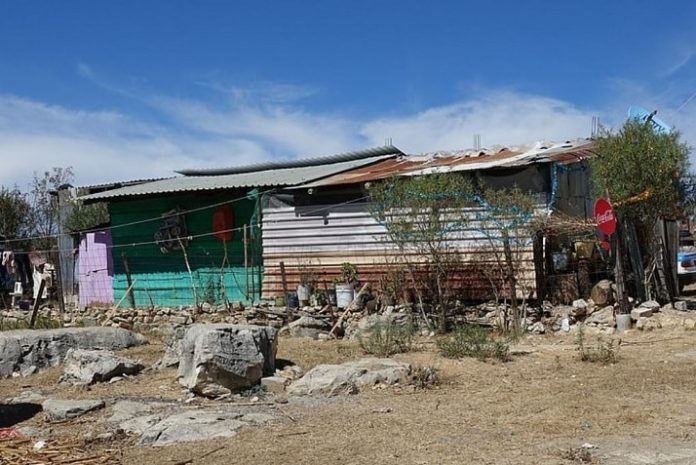 Yalitza endured a very tough upbringing as her father out of frustration once left home when she was still a child.

Raul left Yalitza together with their mother, elder sister (Edith), and younger siblings in order to go tap economic opportunities far away.

As a result of that, Poor Yalitza was raised more by her single mother, alongside her big sister Edith, and three other siblings. Back then, her mum worked as a maid (a nanny and housekeeper).

Despite the travails in her childhood years, Yalitza was somehow able to scale through her education.

As a teenager, she began building a keen interest in child caring. Yalitza went on to pursue a degree in pre-school education before later proceeding to have a degree in early childhood education. She (pictured below) during her studies spent lots of time with kids.

After completing her teaching degree, the future actress forged ahead and began working as a preschool teacher at Jardin de Nino’s School, Mexico. Yalitza never had many monies while she worked after her studies.

She was so poor that she couldn’t transport very often from her family home to school.

Instead, Yalitza would sometimes walk five miles in order to get to her low-paying job. Pictured below is the school (Jardin de Nino’s School) where Yalitza Aparicio worked.

At Jardin de Ninos School (her workplace), Christmas time was Yalitza’s favorite. Back then, she would celebrate the special day by dressing up in a Santa Claus outfit.

Below is Yalitza pictured in a parade during one of those Christmas days where she represented her place of work (Jardin de Ninos School).

Moving on with life after making the decision to leaving her teaching job, Yalitza was called into acting.

She went on to audition for a lead role for the 2018 drama film “Roma“, where she acted as a housekeeper and nanny called “Cleo”. This was a role that was keenly auditioned by 110 other prospective actresses around the world.

Did you know?… It was Yalitza Aparicio’s sister, Edith who initially was prepared to audition for the role. Because Edith Aparicio was pregnant and wasn’t in the state to do so, she decided to push Yalitza to replace her.

Luckily for Yalitza, she impressed the movie director Alfonso Cuarón and was picked for the role thanks to her perfect domestic worker role which looked natural.

In order to be able to act some scenes for the role, Yalitza Aparicio had to learn the indigenous language (Mixtec) which happens to be the language of her father’s ancestors.

Did you know? … Yalitza was not a professional actress at the time of acting in the movie. In fact, she had no formal training in acting before the movie.

The super lady rose to prominence after making history as the first indigenous actress nominated for an Oscar in 14 years.

Did you know?… Her role in Roma is a replicate of whom her mother was while she grew up in Tlaxiaco. It was a kind of replay of Yalitza Aparicio’s childhood story and she did justice to the role with passion. 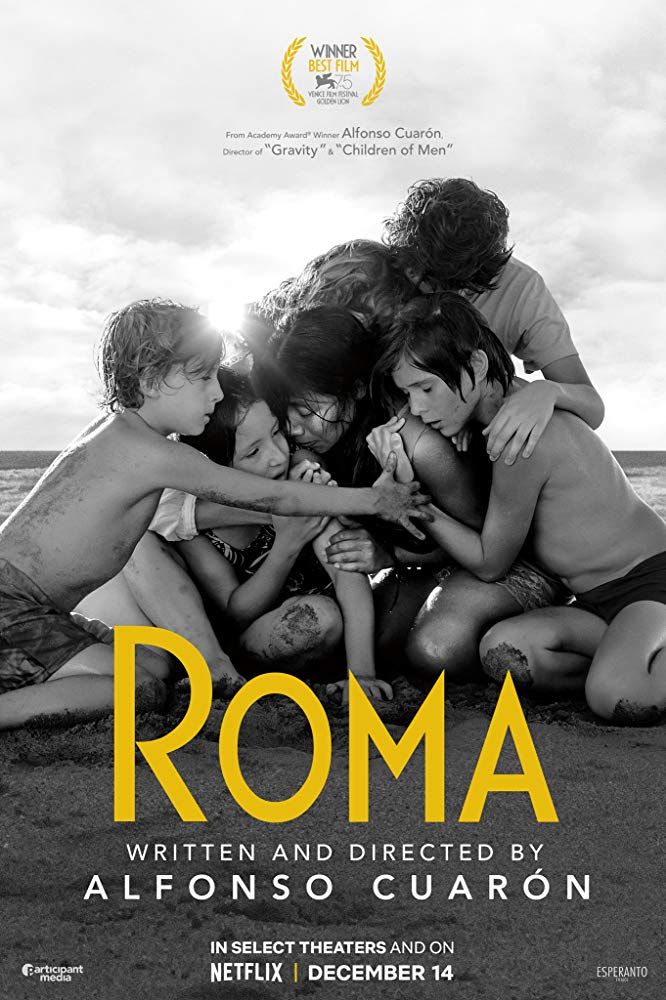 Yalitza Aparicio’s biography can’t be complete without mentioning her role in the movie (Roma) which is seen as the biggest turning point of her life.

Did you know?… Roma made an estimated $2.8 million after being released on Netflix. Also, the movie grossed past $3 million in less than 24 hours of its release.

Yalitza Aparicio’s broke all kinds of records, even that which saw her getting featured on the cover of Vogue Mexico.

Fast forward to the time of writing Yalitza Aparicio’s biography, she has indeed moved from being a School Teacher to one of the fastest-rising actresses in Hollywood. She once said in her words;

“As a teacher you set an example, you become a role model, and this experience of being in the film has made people in my community look at me as that possibility that their dreams could come true.”

The rest, as we say, is now History.

With her rise to fame, lots of fans did make inquiries as to if Yalitza Aparicio is in a relationship. Is there a boyfriend, Husband OR is she is actually married? As at the time of writing, it appears Yalitza has not publicly shown the identity of her boyfriend.

According to social media research, it appears Andre Montes is Yalitza Aparicio’s boyfriend and future husband.

While Yalitza keeps her social media feed on the professional side, her boyfriend is much more open to sharing cute photos of them.

Judging by the way both are going, it is almost certain that marriage could be the next formal step.

For the fast-rising actress, the road to stardom wouldn’t have been as palatable as it is without the help of family members.

In this section, we’ll give you more insights into Yalitza Aparicio’s family members starting from her parents.

Raul Bautista Aparicio was born in the early 70s. He belongs to the Mixtec ethnicity in Mexico.

Back then, in order to raise his family, Raul worked as a street vendor in the city of Tlaxiaco. Judging from the photo below, it appears Yalitza has made peace with her dad who once abandoned her.

Margarita Aparicio is Yalitza’s mum. She was born in the mid-70s and belongs to the Trique ethnicity in Mexico. Back then, she worked as a maid (a nanny and housekeeper) in Mexico.

Thanks to her low paying job, she was still able to raise her children as a single mother. Both mother and daughter look alike and appear to be very close.

Yalitza Aparicio has four siblings, one older sister (Edith), two younger sisters and a younger brother. Some, if not all of Yalitza Aparicio’s siblings appear in the photo below.

Moving on from Yalitza Aparicio’s immediate family life, it appears very little documentation exists about her paternal and maternal grandparents.

More so, Yalitza’s uncles, aunts, cousins, nieces, and nephews (as at the time of writing).

Getting to know Yalitza Aparicio’s Personal Life would help you get a better picture of her personality. Starting off, she is extroverted, optimistic, enthusiastic and also, someone who posses a great sense of humor.

Yalitza Aparicio is able to transform her thoughts into concrete actions and this is a personality she displayed in her role in the movie “Roma“. All these are strong attributes of her Sagittarius Zodiac Sign.

Away from acting, Yalitza Aparicio has intentionally used her new platform to advocate for gender equality, indigenous rights, and the rights of domestic workers.

Since her work in Roma, the popular Mexican actress has attended numerous conferences for the promotion of human rights and of Mexican culture. This has made UNESCO designated her as the Goodwill Ambassador for the indigenous peoples.

At the time of writing, Yalitza Aparicio is estimated to have a Net Worth of $1,000,000 US Dollars. The origin of Yalitza’s wealth stems from her earnings as “Cleo” in Roma.

However, having a huge net worth, Yalitza lives a very conservative lifestyle. She is not the kind of celebrity who showcases her huge wealth (mansions, cars, etc) on social media.

The truth is, she lives a life devoid of irrational spending, holding on to practical needs that don’t cost much.

Before we call it a wrap on Yalitza Aparicio’s childhood story and biography, here are lesser-known or untold facts about her.

No script for Roma:

Yalitza wasn’t given scripts or even a story for the film. Instead, she reacts to developments as they happen. The way the director of the movie setup up the film was a bit different. The chronological order method got its adoption in film production.

According to LA Times puts it, Yalitza is the second Mexican actress to be nominated for academy lead actress. The first was Salma Hayek for her role in “Frida.” More so, only six other Mexican actors and actresses have received acting nominations from the Academy.

How she killed her Nervousness:

Before the 2018 drama film “Roma“, Yaliza was a very nervous girl. Thankfully she was able to overcome this challenge after receiving advice from her elder sister, Edith Aparicio. According to Yaliza;

“Sometimes, I shake when lots of people surround me. I’m so nervous. Things changed after my sister told me — ‘Don’t stay quiet. Speak up, say things!. When you are in front of an audience or with a lot of people and feel nervous, try not to look in their eyes. Try to see above their heads, and then you won’t be so nervous”.

What is Yalitza Aparicio’s Religion:

The place she came from (Tlaxiaco) has an indigenous history tied to Catholicism. This is the primary form of the Christianity religion.

Judging by this, we can say that there is a likelihood that Yalitza Aparicio’s parents had probably raised her in adherence to the Catholic religious faith.

Thanks for reading our Yalitza Aparicio Childhood Story, plus untold biography facts. At ChildhoodBiography, we strive for accuracy and fairness.

Please stay tuned for more Actresses Biography stories from us. You might find that of Kylie Minogue, Regina Daniels, Scarlett Johansson, and Genevieve Nnaji interesting.

If you see something that doesn’t look right in this article on Yalitza Aparicio’s Biography, please place your comment or contact us!