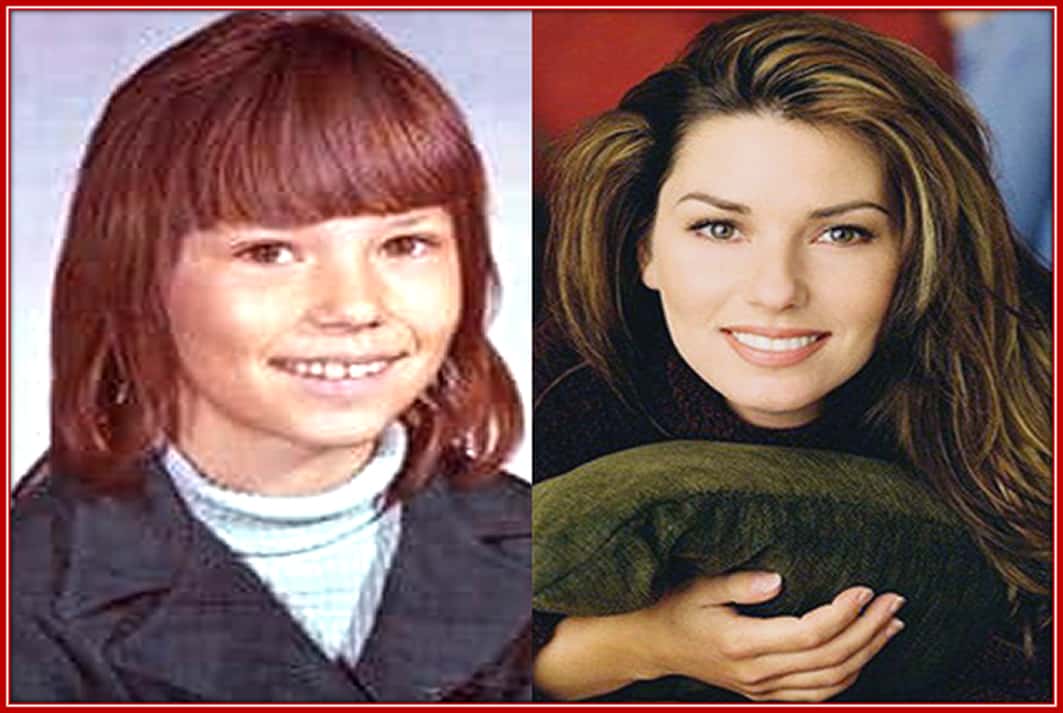 In a nutshell, we present you with an in-depth analysis of Shania Twain’s life history. Our story begins from her early days to when she became famous in her music career.

To whet your autobiography appetite, here is her cradle to fame gallery. It portrays a perfect summary of Shania Twain’s Bio.

Yes, we all know that she (like Celine Dion, Dolly Parton, and Mariah Carey) are among the best-selling female artists the world has ever encountered.

However, only a few have read the concise version of Shania Twain’s Biography, which is quite interesting. Without further ado, let’s begin.

For Biography starters, she bears the nickname “The Queen of Country Pop”. Eillen Shania Twain OC was born on the 28th day of August 1965 to her mother, Sharon Morrison, and father, Clarence Edward, in Windsor, Canada.

She is the second of three girls, born of the union between her biological parents, pictured below.

When Shania was two, her parents got divorced, and her mom moved to Timmins, Ontario, with her daughters. This entire ordeal took a toll on the little girl and made her lose interest in social life.

However, the presence of her sisters and mother made her childhood lively and devoid of loneliness.

The young songwriter was raised with Jill and Carrie Ann (her sisters) as well as Mark Twain (her stepbrother). Together, they lived a reserved life while avoiding too much attention.

Back then, their mom got remarried to Jerry Twain, who adopted her little girls and changed their surname to Twain.

Even in her new home, the songwriter did not enjoy enough peace of mind. There were days when Twain and her sisters would witness her mother and stepfather fighting terribly.

The entire situation was too much for her to handle. Notwithstanding, all she thought about was surviving with her siblings.

The upcoming musician grew up in a poverty-stricken home. Her mother found it difficult to provide for the family after the divorce.

Sometimes, poor Twain and her siblings will stay all day without eating. Her mom had to take up several menial jobs to make a living for her children.

Even after getting remarried to Jerry Twain (a forestry worker), they still found it hard to live like average families.

Despite their poor status, Twain’s menage spent some of their weekends and summers at the nearby Mattagami reserve.

Interestingly, she has two fathers whose ethnicity are entirely different. Her biological dad, Clarence Edwards, is of French and Irish descent.

On the other hand, Jerry Twain (her stepfather) is a descendant of Ojibway, which is a North American Indian tribe and mostly based in Ontario, Canada.

From her maternal Origin, she is of Irish descent. However, some of her Family Roots can also be traced down to the Native American tribe.

Do you know?… Twain was 8 when she started singing at bars to help cover her family bills. She often sang between midnight and 1 a.m. to earn $20 for her service.

After working through the night, she would head back home to make it to school at dawn.

Regarding her educational background, Twain attended Timmins High and Vocational School. While in school, she studied hard and gave her undivided attention to music.

As a novice, she became a vocalist for a local band called Longshot, which covered Top 40 music in the early 1980s.

After school, the songwriter often works with her father’s reforestation business. You can guess she derives pleasure in spending some quiet time in the forest with her guitar while she jots down some songs.

Finally, Twain graduated in 1983 from Timmins High and Vocational School and focused solely on pursuing a career in music.

Sadly, her days with the Longshot ended as the group wound up. Afterwards, she joined a new band — Flirt — and took part in their musical tour around Ontario.

As if her expeditions weren’t enough, Twain took singing lessons from coach Ian Garrett, and in return, cleaned his house for payment.

Just when she started attracting recognition from famous DJs like Stan Campbell did, the claw of death deterred the speed of her success.

In November 1987, Twain lost her parents in a car accident. This ordeal affected her career success as the 22-year-old had to channel all her energy into raising her younger siblings.

In 1993 Twain finally released her debut studio album titled “Shania Twain“, which gave her the breakthrough she desired in the entertainment industry.

The album failed to make significant sales upon its release. However, it received positive reviews from critics and hit the no. 67 in US Country Albums Chart.

Interestingly, her music attracted the rock producer; Robert John ”Mutt” Lange, who offered to collaborate with her in songwriting and production.

Together, Twain and Lange co-wrote her second studio album titled “The Woman in Me“ and released it in February 1995. With luck on their side, the album won a Grammy award for the best country album.

Fast forward to the time of writing this Bio, Shania Twain has sung alongside veteran artists like Dolly Parton.

Her so many albums and singles have earned her numerous awards in her career life. The rest, as they say, is history.

After making a name for herself in country music, it is only fair for fans to ask questions about her love life.

To begin with, Twain first dated her producer (John Robert Mutt Lange) for a short while before they got married on the 28th day of December 1993. Their marriage gave rise to the birth of a son — Eja Lange.

Sadly, the lovely couple filed a divorce petition after Twain found out that her husband was having an affair with her friend — Marie-Anne Thiebaud.

Their 17 years of marriage officially ended after they finalized their divorced in June 2010.

About a few months after her separation, Twain got engaged to Frederic Thiebaud (the ex-husband of Marie-Anne).

The new couples went out on many dates and ended up tying the knot on the 1st day of January 2011 in Rincon, Puerto Rico. Interestingly, Twain describes her marriage to Frederic as a beautifully twisted occurrence.

As earlier mentioned, the singer comes from a poor household. However, her family members have supported her gradual rise to fame in one way or the other.

Hence, we bring you facts about her father, mother, and siblings in this section.

Clarence Edward is the biological dad of the veteran singer. Sadly, he wasn’t part of her life when she needed him the most.

As earlier mentioned, Clarence divorced Twain’s mother when she was 2. This led her mom to remarry her stepfather, Jerry Twain.

Do you know?… The artist disclosed that she had always referred to Jerry as her father. He has been the major paternal support she has ever had in her Life Story. Hence, it would be a slap on his face if she addresses him as her STEPDAD.

Words can’t explain the chemistry that exists between Twain and Sharon Morrison (her mother). As expected, poor Sharon worked so hard to take care of her daughters after her divorce from Clarence.

It was her undying desire to raise her girls appropriately that led her to remarry Jerry. Sadly, she and her second husband didn’t live long enough to enjoy the fruit of their labour as they died in a car crash.

The iconic musician has two biological sisters, namely; Jill and Carrie Ann Twain. Also, she has a younger step-brother (Mark Twain) from her mother’s subsequent marriage.

After the demise of their parents, Twain took up the responsibilities of raising her younger siblings.

Apparently, the superstar also had a brother who was adopted by her stepfather and mother. His name is Darryl Twain, and he is the surviving nephew of Jerry.

Darryl started living with Twain and the rest of her siblings after the death of his mother.

Similarly, Twain’s maternal grandparents were George Bertram Morrison and Eileen Pearce. There has been no information about her uncles and aunts.

What makes The Queen of Country Pop thick?… To begin with, Twain’s persona is a blend of the Virgo zodiac trait. She’s one of the kindest entertainers you would ever meet.

Aside from her singing endeavours, Twain loves to play the ping pong game. Can you match up to her talent in tennis after watching the video below?

It would interest you to know that one of her hobbies also includes horseback riding. Twain occasionally spends some of her leisure time with Mimi (her horse).

Interestingly, she rode her horse through Las Vegas For New Commercial in January 2020.

As a result of her commitment to the entertainment industry, Twain has amassed fame and luxury.

Furthermore, the country-pop artist lives with her husband in Corseaux overlooking Lake Geneva, Switzerland. Her luxurious lifestyle has prompted her to purchase many expensive houses in Las Vegas, the Bahamas, and Ontario.

To help you get a full understanding of her Biography, we’ve prepared some interesting facts about the artiste in the section below.

The famous songwriter was a devotee of Sant Mat. This is a spiritual movement in the Indian subcontinent which started in the 13th century CE and is mainly based on meditation.

She adopted the Sant Mat religion when she was still married to her first husband.

In 2003, Twain lost her voice after she got diagnosed with Lyme disease, which created some nerve damages to her vocal cords.

More so, it became a threat to her music career as she feared she might never sing again. It took her so many years of patience and surgical operation before she could perform again.

The Canadian songwriter is actually drawn to animals since she was a kid. Also, Twain is a supporter of PETA (People for the Ethical Treatment of Animals).

No wonder she has kept about three pets in her home. They include; Melody (a dog), Skipper (a cat), and her adorable horse — Mimi.

Secret To Her Unbelievable Young Looks:

Interestingly, Twain has revealed the striking secrets behind her youthful looks. During one of her interviews with WELLANDGOOD, the singer disclosed that she starts her morning with a smoothie (made of coconut water, avocado, and apple).

In addition to that, she mixes sugar, a bit of olive oil or any face cream, as well as a little quantity of warm water, and gently scrub her face with it.

The table below summarizes the female superstar’s Childhood Story and Biography Facts.

The Life Story of Twain is an encouragement to many people who have gone through similar experiences. Obviously, she underwent several heartbreaking ordeals but overcame them with high hopes of becoming a revered musician — Of course, she did.

It behoves us to commend the unmerited efforts of her mother in supporting her dreams. Despite the poor financial state of her family, she still ended up making her parents and siblings proud.

Our team at Childhoodbiography appreciates you for reading Shania Twain’s childhood story and further breakdown of her bio.