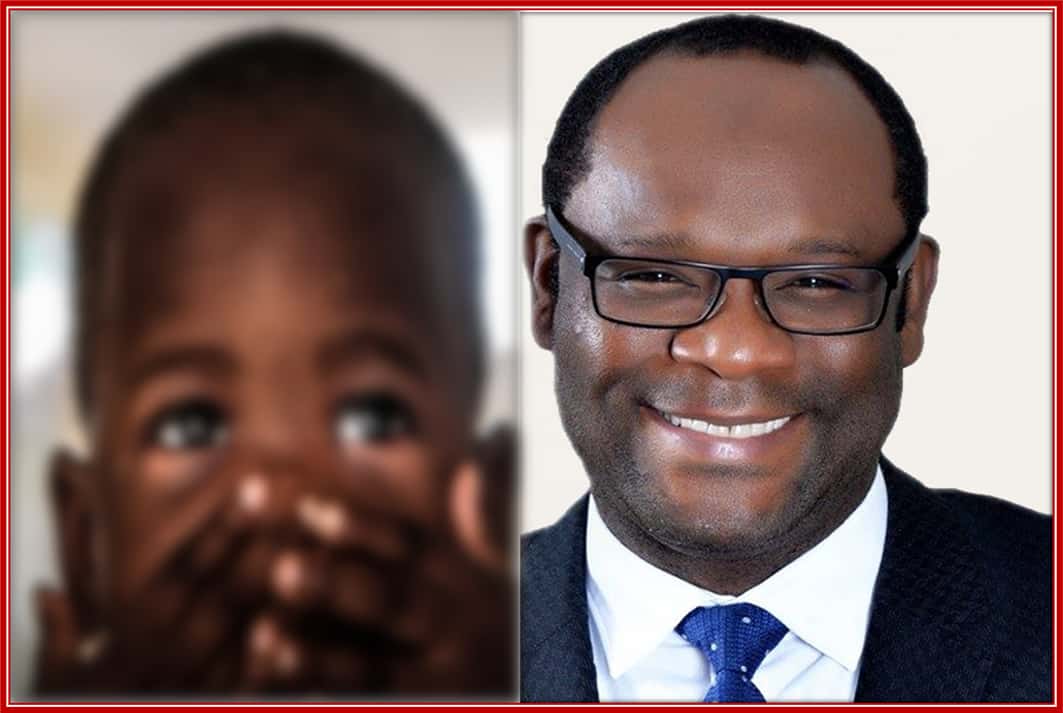 Simply put, it’s a full analysis of his journey from the cradle years right until he became famous.

Yes, just like Justin Trudeau, you probably got to know him after his ascension in the Canadian Political space.

You’re probably aware he has the accolade as the first Black appointed minister of justice and solicitor-general of Alberta, Canada.

Despite the recognition, we realize that Kaycee Madu’s Biography is quite scarce. Without further ado, let’s begin with his fascinating life story.

For Biography starters, his name; Kaycee is a nickname for Kelechi. Madu was born between the range of years 1973-1974 and raised in South-eastern Nigeria to parents with no formal education.

Having a humble background and illiterate parents. The now Canadian Politician was once a young chap who aspired for greatness.

Kaycee Madu learned the importance of hard work, honesty, integrity, and dignity from his parents. He had over ten siblings while growing up.

Just like most southeastern Nigerians. Kaycee Madu was brought up by his parents in a typical nuclear Naija household.

His mum and dad both imbibed hard work in doing various businesses to provide financial stability as much as they could.

Even though his name sounds so English, the Politician has deep roots in Africa.

Kaycee Madu’s parents are Nigerians and he has his Nigeria origin from Umuokirika, a community in Ahiazu-Mbaise local government area of Imo State, South-east Nigeria.

The Politician left Nigeria in 2005 and became a Canadian by naturalization. Today, Kaycee Madu is a Nigerian-born Canadian who lives in Edmonton, the Canadian province of Alberta.

Having a Dad and Mum with formal education, Kaycee’s family has always held educational values with high esteem. The household was keen on making the best out of life on the path of literacy.

Even though we are yet to know where Kaycee Madu had his Primary and Secondary education (Technical School (SETESCO) Obohia), it’s likely he attended the same school with one of his sisters.

Kaycee, after successful tertiary education, earned a Bachelor of Laws Honours Degree from the University of Lagos in 2001. He then moved to Canada in 2005 with his spouse after being called to bar.

The Canadian Politician, like many Nigerians who left for Canada, was determined to be successful in his new home. Having attended the Nigerian Law School in Abuja, Nigeria, and then called to bar, Madu and his wife emigrated to Canada so he could practice Law.

Few years after living in Canada, he established a law firm- Tisel Law Office in Alberta. The target was to provide high-quality client-focused legal services. Barely four (4) years in 2009, Kaycee got among the team that received the Premier’s Award of Excellence award.

This is a recognition preserved for Alberta Public Service employees for superior client service and business excellence practices.

Subsequently, the Nigerian-born Lawyer began serving in different capacities in Public service. Madu once worked as a senior technical advisor for the Government of Alberta in areas of legislative and regulatory reviews.

Even though being a lawmaker wasn’t his greatest aspiration, Kaycee’s heart for the citizens of Alberta eventually led him into politics.

Early into his political career, Kaycee Madu did well in operational and strategic public policies relating to issues management and stakeholder consultations.

On the 16th of April 2019, he got elected to the Legislative Assembly of Alberta to represent the electoral district of Edmonton-South West.

Moments later, he got appointed as minister of municipal affairs. Madu, on the 25th of August, became the first African to be appointed Minister of Justice and Solicitor General of Alberta, Canada. The rest, as we say of the true leader, is now history.

The Canadian Politician, while at the University of Lagos, met his wife, who goes by the name Emem Madu. Like him, she is also a barrister and Solicitor.

Both Lawyers practiced Law at their family firm- Tisel Law office in Alberta.

As a good Lawyer, Kacee Madu’s wife (Emem) is passionately committed to the best interest of her clients. Pictured below, she is a one-time student of the famous Queen’s College in Lagos, Nigeria.

Like her husband, Emem holds Bachelor of Laws (LL.B.) from the University of Lagos (the year 2002 set). The intelligent lady came out with a First Class Honors Degree from the Nigerian Law School in 2003. After migrating with Kaycee to Canada.

She got her Master of Laws (LL.M.) at the University of Alberta in 2007. The marriage between Kaycee and Emem is blessed with three children.

With a lot to worry about regarding basic household needs, (food and healthcare, etc), Kaycee, with his other ten (10) siblings, had to struggle to brainstorm, read and learn.

This came with the full support of their determined and diligent parents. In this section, we’ll throw more light on his dad and mum.

Fathers are indeed feathers for sons to fly and Kaycee’s Dad hasn’t been an exception. Thou his full name is not clear yet, he, together with Mum had eleven (11) Children.

As mentioned before, even though not educated. They made it a point of duty to instill hard work and educational Values in their children.

Just like many from Mbaise (Nigeria), Kaycee Madu’s parents were diligent farmers. His father, who is around his 90, was also a petty trader.

As crowns to the head, so are kids to their parents. Barrister Madu and Emem’s marriage has produced three (3) children with the names; Adanaya, Chisom, and Ugonna. Find below, a beautiful family photo of Kaycee Madu.

Although Kaycee Madu has Eleven (11) brothers and sisters. Whom we know little about. However, among his siblings, only his elder sister called Mrs Eucharia Anyanwu (nee Madu) is popular.

The fondly called first lady. Just like Kaycee, we know Eucharia Anyanwu for her intelligence and high leadership skills. In terms of occupation, Eucharia Anyanwu is a product officer of diaspora banking in one of the leading Banks in Nigeria.

In this section, we’ll make you understand his life outside politics and law. Starting off with his likes, Kaycee Madu enjoys poetry, soccer, traveling, and strategic military studies.

He also loves his family tradition as he is a bonafide member of Alberta’s Nigerian and Igbo communities.

Also, on a personal note, Kaycee is a principled and consistent conservative who believes in fundamental freedom for all. As observed below, he does love to associate with every group.

Even though we know his family resides in the southwest of Edmonton, Alberta, his cars and House type aren’t visible to the public.

The truth is, Kaycee is among the most influential persons in Alberta, Canada. The man whom we refer to as the second to the Premier of Alberta lives a humble lifestyle.

Without a doubt, he must earn a fortune as Alberta is the richest province in Canada. The GDP per capita of the province is C$78,154.

Before his August 2020 appointment, Kaycee Madu did make more than $100,000 per annum aside from indemnity and allowances.

Although most calculations are based upon a mixture of social factors. The truth is, it’s over sixteen years since his professional career. This feat makes us agree with Gistvic Connects, who says Kaycee Madu’s Net Worth is estimated at $14.5millon.

In the rounding up Biography, let’s take a swift look at some Information you probably did not know regarding the Nigerian-born Canadian Politician.

A Role Model to The Black Community:

Kaycee Madu is an active member of the African community as lots of Nigerians and Africans living in Canada look up to him. Even Dunia Nur, President of the African Canadian Civic Engagement Council celebrates him too- in her words;

“What matters is effective Black people that have integrity, good education background and the ones that can occupy the space.”

In 2009, alongside a team he worked with within the public service, they awarded Kaycee Madu the Premier’s Award of Excellence in the bronze medal category.

Also, on March 4, 2020, Kaycee Madu got a merit election. He did become a member of the Queen’s Counsel by the Lieutenant Governor of Alberta.

Did you know?… Queen’s Counsel is the highest honour for lawyers who have made significant contributions to the advancement of law and society.

Just like most people from his family lineage- Mbaise people from Southeast Nigeria, the Canadian minister had a strong religious background.

Kaycee Madu is a Christian, and you can observe that when he swore an oath into the office of Solicitor-General with a Bible.

Oftentimes, when someone coming from an underprivileged background succeeds in life, people like Kaycee Madu remind us of the need to be steadfast.

No doubt, his determination to succeed against all odds has made the Canadian Politician attain global recognition.

Do well to share your thoughts about our Biography of Kaycee Madu. Kindly stay tuned for more Politicians’ Childhood stories from us. The History of Ahmed Lawan, Omoleye Sowore and Osagie Ize-Iyamu will excite your reading pleasure.

We guarantee you more top-notch life stories for more Canadian Politicians in the future.