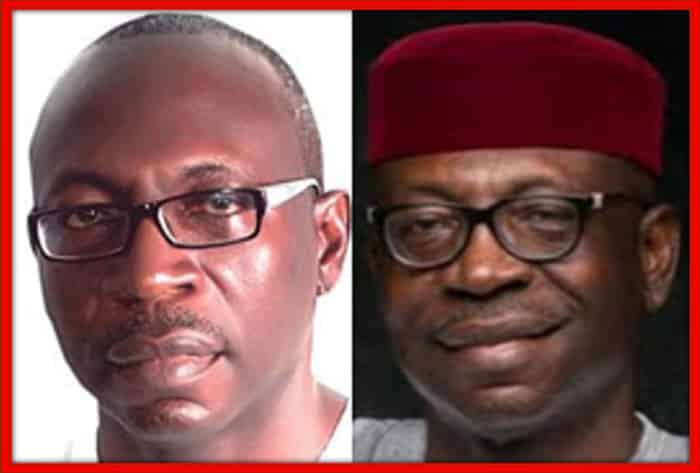 It’s a thorough research of notable events concerning his Early Days right until his fame.

Yes, he is well known as a Nigerian Pastor, Politician, Agriculturalist, former Chief of Staff and Secretary to the Edo State government in Nigeria.

He is also a member of the All Progressives Congress (APC). Stay through as we unfold and enrich you with the fascinating life story of Osagie Ize-Iyamu.

For starters of his biography, the Nigerian Pastor was born on the 21st of June 1962 to his father, Late Chief Robert Osayande Ize-Iyamu, and his mother, Mrs Magdalene Naghado Ize- Iyamu (née Obasohan), also of blessed memory.

His full names are Osagie Andrew Ize-Iyamu. The Dad to the politician, before his death
was the Esogban of Great Benin Kingdom while his Mum was an outstanding business
woman.

Before his adulthood, he must have had a happy childhood experience being born into a royal family.

And so, growing up in the bronze-casting city of Benin, he had zero worries concerning basic family needs of shelter, food, and healthcare.

It’s a norm, especially in Benin City for Royals to be in high esteem. Osagie’s upper-middle-class family is not left out.

They were a highly respected household, deeply rooted in nobility and with an outstanding record of service to their community and society.

Knowing the history of our ancestors helps us gain a greater understanding of past challenges and as well gives us insight into living a better life. Without further delay, let’s see what Osagie’s origin has got.

Ize-Iyamu hails from Iguododo, in Orhionmwon Local Government Area of Edo State. He is a descendant of an illustrious family.

The agriculturalist was known to have outstanding performances throughout his education. Ize- Iyamu had his primary education at St. Joseph Primary School and Ebenezer Nursery and Primary School, respectively both in Benin City.

Soon after, he had his Secondary education at the premier secondary school in Edo State in 1979, called Edo College. He obtained the best result in the art class in his West Africa Certificate Examination.

On gaining admission into the University of Benin in 1980, he studied Political Science
but later changed his course to study Law the following academic session. He was part of the pioneers in the Faculty of Law, University of Benin.

He graduated with an LLB (Hons) in 1985/1986 and proceeded to the Nigeria Law School where he bagged the Bachelor of Law (BL) and was called to the Nigerian Bar afterwards
in 1987.

In our current society, Studying Political Science is not a criterion to venturing into politics. However, Osagie’s closeness to the affairs and communal politics his father was involved in, gave him a keen interest.

This passion would lead him to dream of becoming a keynote player in the political activities of his State of Origin.

Most vibrant members of the Student Union while in the University continue to toe the part of politics.

Pastor Osagie Ize-Iyamu’s case was no different. He was highly instrumental to the election of several presidents and Executive members of the Student Union while in the University of Benin.

His experience would later prove crucial to the strategy that led to the election of Dr Lucky Nosakhare Igbinedion, as the then Chairman of Oredo Local Government Council, in Benin City, in 1983, under the zero party system.

As a result of his job well done, he became the Chief of Staff, Edo Statehouse, under the administration of Dr Lucky Nosakhare Igbinedion, the then Executive Governor of Edo State in 1999.

During which he elevated the office to the enviable status of a melting pot of consultation, strategy and confidence building.

As the Chief of Staff, from 1999 through to 2003, He ensured the smooth and serene relationship with pensioners and labor leaders throughout Edo State.

In recognition of his sterling performance as Chief of Staff, Osagie Ize-Iyamu grew to the position of Secretary to the State Government (SSG) where he proved to be reliable, dependable, trustworthy, and a positive generational ambassador committed to the well-being of the Edo people.

As a result of his intellectual and apt abilities, the Pastor has held critical positions in party politics. He has been, National Vice-Chairman and South-South Zone of the defunct Action Congress of Nigeria (ACN).

Osagie was also the Coordinator of the Goodluck/Sambo Campaign Organisation in 2011. And also the Director-General of Governor Adams Oshiomhole Re-election Campaign Organization. In 2012, he became Member, APC Constitution Drafting Committee.

In all these assignments, he has discharged his responsibilities excellently. He received an honorary doctorate at Benson Idahosa University on the 1st of July 2019 in Public administration.

Pastor Osagie Ize-Iyamu, was the candidate of the People’s Democratic Party (PDP) in the 2016 gubernatorial election in Edo State.

But is currently declared the winner of the governorship primary of the All Progressives Congress (APC) under the President Muhammadu Buhari administration.  The election slated for September 2020 in Edo state.

A man’s success, they say has a lot to do with the kind of woman he chooses to have in his life.

Before the demise of his Royal parents and the marriage to his wife, the former Chief of Staff had full support from his parents.

This family support helped shape his political concept and good background. Now let’s take a look at his father, mother, siblings, plus his relations too.

Above all, he was ranked second in command until his demise, as the Esogban of Benin the astute politician’s father, was a revered high chief of the Oba of Benin. Osagie’s mother was a trained teacher who later distinguished herself as a very successful trader.

Aside from having a new social life, having children gives you and your partner something to talk about, including memorable experiences. The marriage of Pastor Osagie has Four (4) children.

Even though not much we known about the pastor’s siblings, it’s clear that he had an elder brother, Osato Ize-Iyamu. Buoyed by the high-profile academic performances, young Osagie once desired to take the footsteps of his senior brother who travelled abroad for further studies.

He was the special adviser to The Edo State Government led by Comrade Oshiomhole on commerce and industry. It’s however unfortunate that he lost his life in 2013.

Osato, before his demise, was a devoted husband to Ifueko, kind father, a devout Catholic, and a fine gentleman.

A humanitarian per excellence, a peacemaker and bridge-builder. His wife is a Lawyer, Vice Chairman, AFBA-NIGERIA FORUM, Member CIArb (U.K) Nigeria Branch and Member, NBA & FIDA.

Former Associate of Ibrahim Babangida, Prof. Omo Omoruyi was the agriculturist’s elder cousin. He, unfortunately, later died of after battling with cancer for so many years in 2013. The late Professor Omo Omoruyi also had a younger brother; Mr Sunny Omoruyi.

Also worthy of note is that late Pa Obasohan, Osagie Ize-Iyamu’s maternal grandfather, and the mother of His Majesty, Oba Erediauwa were first cousins.

As described by people that know him personally, he is highly detribalized. Osagie is open to positive ideas, a motivator of a definite plan, and has social values. He is a nexus of hope for Christians, especially in Government. Ize-Iyamu is also a crusader of social justice and fairness.

Osagie Ize-Iyamu’s footprints in politics and public office throughout Edo State has been phenomenal in, depth, scope and its intensity. He is a deep-thinking political architect whose courageous designs inspire the hope for good governance and democratic freedom.

How Rich is Osagie Ize-Iyamu? We currently don’t have enough information about his Cars, Monthly/Yearly Salary etc.

Although the Edo-born politician currently holds no position in politics. His primary source of income remains his Farm. Osagie’s annual salary has an estimated net worth of $ 4 million as of 2019.

In rounding up our childhood story and Biography article, we present a piece of information you probably did not know with regards to the Nigerian Politician and Pastor. Without hesitation, let’s kick off.

The Ize-Iyamu family has the record of a building and owning the first storey called “Egedege N’Okaro” throughout the whole of the Mid-Western Region, Nigeria which is the present-day Delta and Edo States.

The structure was built in 1906 by Osagie’s great-grandfather Late Chief Iyamu, the Inneh of Benin Kingdom.

Having intended to build a business with varied interests, he established I.O Ventures Ltd in 1996, speaking of which he has been Chairman/CEO to date. The Training Institute is a model farm settlement at Ugbor, Amagba communities in Benin City, Edo State.

The farm settlement has an objective of agricultural training, youth empowerment and skills acquisition; the right solution to the reduction of youth unemployment, restiveness and organised crime.

Driving off on a journey from Benin, approaching Shagamu, his vehicle had lost control. There was a fatal accident that left him blind, lame and unconscious.

According to Osagie, in Nine hours amidst his unconsciousness, he prayed and vowed to serve God if he survived. Was that prayer answered? I guess you know the answer.

The accident was the incidence that gingered Osagie into dedicated and heart-seated devotion to God and the Christian Community.

His work and passion for his faith is second to none. Today, just like the Number two (2) citizen in Nigeria, Vice-president Yemi Osibanjo; Osagie Ize-Iyamu is a Christian and also Pastor. He is the District Pastor overseeing Zonal, Area and parishes of The Redeemed Christian Church of God (RCCG) in Edo State.

Under his leadership, a magnificent edifice that drew the attention of the General Overseer, RCCG, Pastor Enoch Adeboye, was built.

Thank you for taking the time to read our version of Osagie Ize-Iyamu’s childhood story. We also see how he stuck to his dream of being not just any politician but one with a difference.

He exudes integrity, passion and excellence in carrying out his duties. However, these qualities did manifest not only in his faith but also in his political life.

Do well to share your experience with us. We guarantee you more biography facts with top-notch accuracy and fairness; rain, come shine. Stay connected!