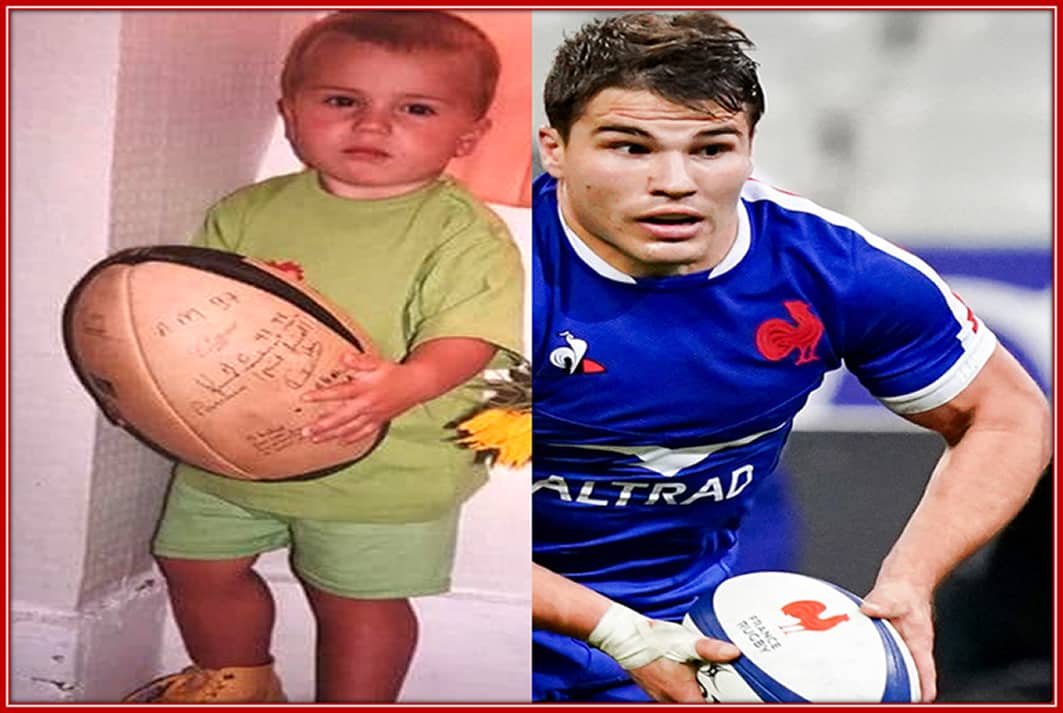 In simple terms, we present you with the scrum-half’s life journey, from his early days, to when he became famous.

To whet your autobiography appetite, here is his boyhood to adult gallery — a perfect summary of Antoine Dupont’s Biography.

Yes! everyone knows that Antoine Dupont won the best player in the Six Nations Tournament in 2020.

However, only a few fans have read about Antoine Dupont’s Biography, which is quite interesting. Without further ado, let’s begin.

For Biography starters, he bears the nickname “the Gifted”. Antoine Dupont was born on the 15th day of November 1996 to his mother, Marie-Pierre Dupont, and father, Jean in Lannemezan, France.

He came into this world as the youngest of two children born of the union between his parents.

The scrum-half was not raised at his birthplace (Lannemezan) but in the small village of Castelnau-Magnoac.

Back then, Antoine grew up with his elder brother, Clement, who was four years older than him. As a little boy, the blond-haired lad was inseparable from a rugby ball.

In fact, he spent most of his time tossing the ball with Clement under the arbour, next to the terrace of their home.

That way, his mother didn’t have to struggle in search of her boys whenever she needed their attention.

With his mom working as a psychiatry nurse and his father raising black pigs, his household thrived as a middle-class family.

Aside from their occupation, Antoine’s brood also has a profound interest in Rugby.

No wonder he was only three and a half years old when his parents handed him his first rugby ball.

One good thing about his menage is the fact that they are united by their undying love for the game.

As earlier mentioned, his village, which is home to over 800 people, is located halfway between Auch and Tarbes.

Rumors have it that Antoine was so attached to his place of Origin that he was once scared of visiting a different city.

Perhaps you didn’t know that Castelnau-Magnoac is a commune in the Hautes-Pyrénées department in southwestern France.

On one fateful day, when the youngest son of the Dupont family followed his mother to the stadium, his love for Rugby grew to a whole different level. Since then, Antoine has become more serious about becoming a professional in the game.

While he studied hard in school, his parents had him join Magnoac FC when he clocked four years old. Routinely, he visited the stadium which is about 100m far from his home.

There, he tested his skills and prowess against his friends, who were about a year older than him.

“During my childhood, I made sure I did my homework well, and my grades in school were good.

At the same time, I was respectful, resourceful, and committed to developing my talents in rugby. Of course, I did not commit any big silly thing.”

When he turned 6, Antoine requested the Jersey of Toulouse Frederic Michalak and Clement Poitrenaud as his Christmas present. Of course, his dream was to one day feature for Toulouse.

In the quest to ensure her son access to a better facility, Antoine’s mother had him join Auch (42 km) at the expense of his dream club, Toulouse (97 km).

She took the hard decision because she didn’t want her 15-year-old son to be far from home and school as well.

Upon his arrival at Auch, Dupont turned out to be the youngest and smallest kid. However, he worked extremely hard and transformed his physique into that of a verified rugby athlete.

As a distinct and humble player on his youth team, he gained the admiration of his coaches and superior. Hence, they helped him develop his acceleration, fluidity, and tactical sense in no distant time.

Just when he started to gain popularity in the sport was Auch relegated to the 2013–14 Rugby Pro D2 season in 2014.

This ordeal made his parents and some family members sad. Notwithstanding, his disappointment turned out to be a blessing in disguise as he joined Castres in the Top 14 afterward.

With his move to the Top 14, Dupont made 61 appearances and scored a record of 44 points for the Castres. His performance did not go unnoticed as scouts were monitoring his improvement.

As destiny would have it, his biggest career breakthrough came when Stade Toulousain recruited him in November 2016.

Of course, his joy knew no bounds as he finally gets the chance to play for the team he supported in his childhood.

Guess what?… Antoine Dupont pulled off a miraculous try assist for Toulouse in their 48-24 win against Stade Francais in January 2021. This is many fans call him the ‘extraordinary halfback’.

At the time of compiling this Bio, Dupont has established himself as an unrivaled talent in France’s national team.

What’s more?… sport360.com has ranked him amongst the best young rugby players of 2020. The rest, as they say, is history.

Moving on to his relationship life, the scrum-half has dated only one lady since his rise to fame.

Of course, Dupont has got a secretive personality that makes him speak less or showcase his girlfriend. However, we found out that he is dating a beautiful damsel called Charlene.

Judging by his profound love for her, there is a high chance that she may end up as his future wife. Interestingly, the lovebirds have gotten the approval of Dupont’s brother and mother.

It is only a matter of time before he ties the knot with Charlene, his girlfriend. We hope he gets to enjoy a happy married life like Jonathan Sexton in the future.

What makes the French icon thick? To begin with, his persona is a blend of the Scorpio zodiac sign. As it is expected, Dupont is a calm and collected figure.

Away from the pitch, he is often found at the right places. Of course, he never gets into trouble and also understands the ingredient of living a happy life.

Moving on to his hobbies, Dupont has shown lots of interest in two wheels. Despite having many exotic cars, the gifted sometimes prefer to cover short distances on his bicycle.

Moreso, he loves to fish whenever he has cleared up his schedule for the day.

Lifestyle and Net Worth:

You can achieve the same financial breakthrough as the halfback, even if rugby is not your profession. But you have to amass an approximate Net Worth of $5 million as he does in 2021.

With such huge earnings, Dupont has ensured he satisfy his taste for luxurious assets by buying a beautiful house and some expensive rides. As I write this Bio, he owns about two exotic cars that we know of.

Apparently, the Rugby player was born into a menage of restaurateurs. Aside from their official jobs, almost every member of Dupont’s family is a talented cook. In this section, we shall unveil more facts about them.

His dad Jean, is always the first person he would always turn to whenever things go wrong. Dupont’s father raised black pigs to make earns meet. He was a hardworking man and a lover of rugby as well.

Do you know?… The black pigs of Bigorre which the Halfback’s dad bred were almost endangered at the end of the 1980s.

Thanks to the resilience of some farmers from Bigorre (including Antoine’s father and uncle) the pigs did not end up in extinction.

As I write this Bio, Antoine’s Dupont’s Dad has an incurable disease following an accident and is receiving treatment in a specialized centre – a source close to the family said.

At the time of writing this Bio, his only surviving parent is Marie-Pierre Dupont. She is his mother and first love. Even after the death of his father, Dupont’s mom never stopped supporting his career endeavors.

She was a psychiatry nurse but often makes out time for her sons. Apparently, her decisions have influenced the Scrum-half’s Life Story positively.

No doubts, he has no idea of what it feels like to have a sister. However, Antoine Dupont has a caring brother who bears the name Clement. They were childhood buddies who played video games and football together.

One interesting fact about the siblings is that they both took rugby lessons from their uncle when they were young. But Clement soon realised that his talent does not lie in the oval balloon.

Hence, he focused on learning about breeding black pigs from his uncle and took over his father’s trade after his demise.

First and foremost, his grandfather, Pierre Dupont, was a renowned hotel owner and a lover of rugby. He often prepared food for the entire family whenever they visited the stadium to watch a game.

Another prominent relative that has influenced Dupont’s life is Jean-Luc Gales, his uncle. Jean-Luc became their first teacher in rugby.

He taught the siblings all the techniques and rules they needed to learn about the game when they were growing up.

To wrap up the halfback’s Biography, here are a few truths about him that would help you get a complete knowledge of his Life Story.

As a little boy, Dupont was often hyperactive, grumpy, and sometimes painful. He liked to eat a lot and never knew just when to stop until his stomach hurts.

It was his biggest childhood challenge. However, rugby has remedied all these his past flaws.

The Gut To Never Give Up:

When Dupont ventured properly into rugby, he was more at a different level from kids two years older than him. However, he had to start with kids within his age bracket in the U8s.

This made him bored with rugby to the point he wanted to stop the sport and try football where a few friends of his were playing.

Before his breakthrough in rugby, Dupont wanted to study physics and chemistry.

However, his sports-related achievements have led him to study sports science and sport management afterwards. Aside from sports, Dupont is also exceptional academically.

The Worst Fear of his Career:

Like every other athlete, one of the greatest setbacks Dupont has experienced is injury.

The halfback was once scared of not being able to play rugby anymore after a back injury. Thankfully, he received the medical attention that helped him get back on his feet.

Basically, a positive mindset was the key to his success in sports. As such, Dupont never saw any need of feeling sorry for himself.

Even in the face of adversities and hardships, he often kept a clear mind with a positive affirmation. Hence, Dupont was able to triumph over his challenges.

We commend his parents and brother for assisting him when he set off on the path to fulfilling his dreams.

His father would definitely be proud of his achievements if he was alive. There is no denying the fact that his achievement has been a source of joy for his extended family.

Thank you for reading our Antoine Dupont Biography. Asides from this Bio, we’ve got other great Rugby stories for your reading pleasure. That of Owen Farrell and Maro Itoje will excite you.

Kindly contact us if you find anything that doesn’t seem right with this article. Also, take a look at a summary of the Scrum-back’s memoir in the table below.