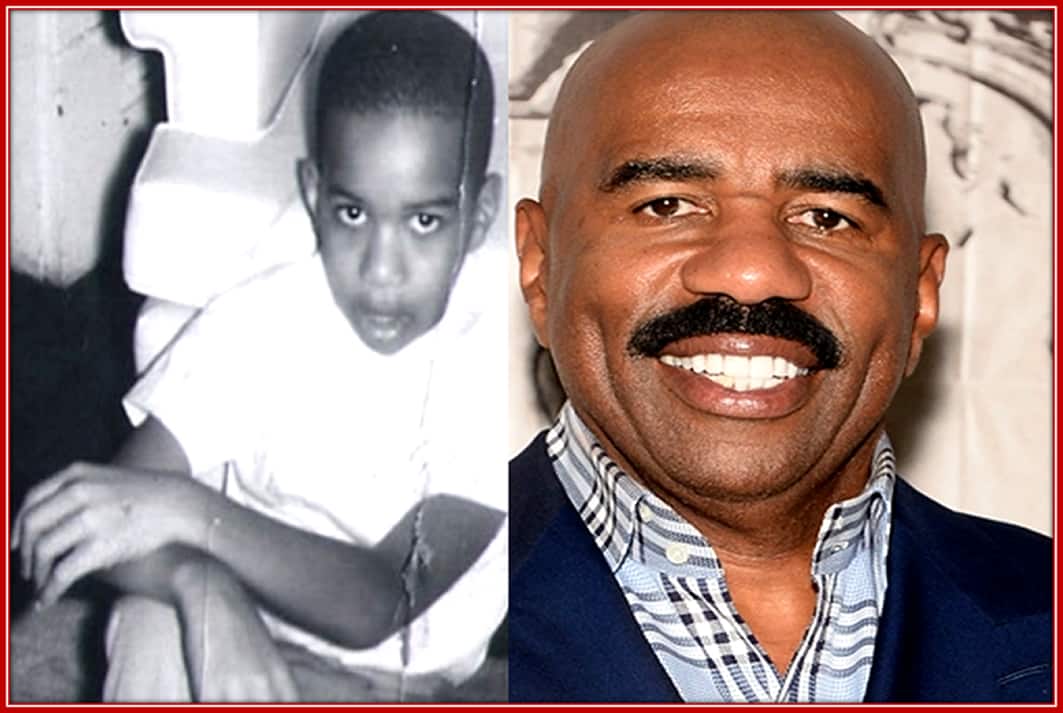 Simply put, we analyze the history of the American comedian, television presenter, broadcaster, and author. ChildhoodBiography tells you notable events from his Early Days to when he became Famous.

Yes, you’ve probably placed him on your list of Famous Comedians from the United States.

However, only a few of his fans (including you) have taken time to view Steve Harvey’s Biography, which we’ve prepared. Come with me, as we discover more about the American comedian.

For starters, his full names are Broderick Stephen Harvey. The US comedian was born on the 17th day of January 1957 to his mother, Eloise Harvey, and father, Jesse Harvey in the city of Welch, West Virginia, The United States.

Little Steve pictured below, came to the world as the youngest of five (5) Children born out of the union between his parents.

Steve was still a child when his family moved to Cleveland, Ohio. It was at Cleveland that Steve spent the most part of his childhood growing up alongside his older siblings. The  part of a large African American family

Also often known as the “Rock and Roll Capital of the World” or “The North Coast.” Cleveland, was where Steve as a  kid was raised but would occasionally return to West Virginia to spend time with his grandfather.

He exhibited some level of discipline being the son of a Sunday school teacher and was fully aware of what he wanted out of life.

It was during his Sixth grade at about 9 years of age that Steve would write on paper that he wanted to be on TV, just like Bill Cosby not considering his speech impediment as at that time of his life.

His never giving up attitude formed one of Mr Harvey’s life philosophies, “You have to dream big and believe that you will succeed.”

Steve’s family did not have much, but their lives were full of their faith.  Asides from engaging in subsistence farming, Steve Harvey’s Dad was a Coal Miner by Profession while his Mum took care of the home. Below this piece is what Steve’s Mum looks like.

Young Steve never did let go of his desire to be a TV personality while attending Glenville High School in 1974 still having to stammer when pronouncing words.

It was at the school he earned his nickname ‘Va-Va-Voom’ given by his schoolmates for failing to rightly pronounce the letter “v” when attempting to say the word “volcano”.

Thereafter, he proceeded to West Virginia University. He is a member of the Omega Psi Phi Fraternity famous for its dedication to its cardinal principles of manhood, scholarship, perseverance, and uplift. Bill Cosby is also a member.

As a young African American Child, Steve Harvey’s early 20s were quite challenging and full of frustrations, as he spent them working a number of jobs including as an insurance salesman, carpet cleaner, postman, even wannabe professional boxer just to earn a living since there weren’t quite what he wanted to do in life.

While Still selling Insurance, On the 8th of October 1985 Steve Harvey won an amateur night contest at a Hilarities Comedy Club in Cleveland; a  local comedy club in Ohio.

He made use of observational humour drawn from experiences in his own life to entertain his audience.

He spent the next few years largely on the road playing in any club that was willing to book him; giving him a room to groom his comedy skills.

His first ascent on the ladder to fame led him to join and win a major comedy competition (The Johnnie Walker National Comedy Search), followed by hosting the TV show ‘It’s Showtime at The Apollo,’ including a TV series “The Steve Harvey Show” where he collaborated with Cedric The Entertainer (1996-2002).

On a King of Comedy tour, Harvey and Cedric joined Bernie Mac and D.L. Hughley on a four-man barnstorming roadshow that became a surprise nationwide hit.

In 1999, The Kings of Comedy became the highest-grossing comedy tour ever to date in the United States, raking in more than $19 million.

Fast forward to the time of writing, Steve Harvey is an award-winning author who has numerous books to his credit, the foremost being “Act like a Lady, Think Like a Man” with a movie – Think like a Man 2012 – behind its concept. he is also the host of a popular game show “Family Feuds” and many other inspirational shows.

The rest as they say is history.

Who is Steve Harvey Dating?

Steve Harvey is in his third marriage. His first marriage was in 1980 to Marcia
Harvey with whom he had twin daughters (Brandi and Karli Harvey) and a son
(Broderick Harvey Jr.). The marriage came to an end in 1994.

Two years later, in 1996. Harvey got married to Mary Shackelford. The two were married for nine years and had a son together (Wynton Harvey).

Divorcing Mary Shackelford in 2005, Harvey began dating the then Marjorie Elaine Harvey. The duo first met her in 1990 and tied the knot two years later in 2007.

She was first married to Jim Townsend in the early 1990s who was a drug kingpin and known for his lengthy past involvement in crime.

Marjorie had two (2) children (Jason Harvey and Morgan Harvey) with Jim and the third (Lori Harvey), with Donnell Woods, another drug kingpin.

It will interest you to know that not only was Steve Harvey a father of Seven (7) Children, he also has Four (4) Grand Children. Let’s take a look at his offspring.

Brandi Harvey who is a twin to Karli is a motivational Speaker, Chief Change Maker, and Executive Director of the Steve and Marjorie Foundation while Karli also being a public speaker is married to a Son. Broderick Harvey Jr. is Steve’s first Son and has his own clothing line.

Morgan Hawthorne an accomplished entrepreneur, partner, a proud wife (married her college sweetheart, Kareem Hawthorne, professionally known as DJ Bruckup, in 2013). She is also a mum to her daughter, Elle.
In 2015, Jason; Steve’s Step-Son founded the luxury women’s footwear company. He is married to the Model Amanda, and their union has produced to three (3) adorable kids, Noah, Rose, and Ezra (Steve’s youngest Grand Son).
Wynton is a photographer and as well as a fashion enthusiast. The youngest Stepdaughter of Steve, Lori is an American model and a popular internet personality. She once had Sean “Diddy” Combs as her boyfriend.

For some time now, Steve Harvey would never speak about his success without the mention of his family’s immense contribution; especially that of his mother and father.

“My father was always my biggest supporter as he often says and Everything else I gat, is because Eloise Vera Harvey taught me about the Love of God and the respect of people”.

Steve was fond of his Dad so much that he talks like him. unfortunately, Steve’s Dad passed away in 2000 due to black lung disease at about 83 years of age.

Steve’s Mum was Eloise Vera Harvey. She was born in 1915 as the 3rd child amongst ten
(10) children. She was a Sunday School teacher and a figure at The Trinidad Church.

Steve was always incredibly close with His Mother and would keep his homelessness
a secret at a time, to keep her from worrying.

Being the youngest amongst his siblings, Steve Harvey had the opportunity of learning a few lessons from the life experiences of his elder ones, which most have helped to build up his personality. His siblings include Terry Harvey, Ramona Harvey, often called Mona Harvey, and Pauline Harvey.

Ramona is known for her dedicated service as President of the Usher Board
Ministry at Cleveland Church of Christ Citadel of Hope Ministries for 50 years.
Not much is not known about the Forth (4th) sibling.

Steve Harvey has a number of relatives they include Thomas Miles often called “Nephew Tommy” and El who were his nephew. Andrena Brown is also his cousin. Nephew Tommy was also a Comedian, actor, and producer.

Haven done well to share Steve Harvey’s dating and childhood story, including facts
surrounding his rise to fame and family background; let’s look at his nature outside
comedy and TV Shows.

Dark brown-eyed Steve, enjoys his downtime shooting dice, fishing and has a strong passion to mentor the young and fatherless. His persona is similar to those of individuals born under the Capricorn Zodiac sign.

Often known as ‘The man behind the moustache’ Steve Harvey’s hard work over the years has afforded him a lavish lifestyle and a good chunk of change.

Do you know as, at the time of writing this biography, he has an estimated net worth of about $160 million?

In fact, one of the Cars in Steve’s garage is a Pearl white Rolls Royce Phantom Drophead Coupe Convertible bought as a present to his wife, Majorie on the event of her 50th Anniversary.

From a multi-million-dollar penthouse in Chicago to a Lavish mansion in Atlanta, Georgia – Steve Harvey has owned some pretty amazing real estate. He has grown an amazing empire with hit books, movies and TV Shows; even his dating site.

Born as Broderick Stephen Harvey on January 17, 1957, he was named after Highway
Patrol actor Broderick Crawford. But he apparently prefers the shortened version of his middle name.

Has a street to His name

In 2015, the street where Harvey lived as a child, East 112th Cleveland, Ohio
was named Steve Harvey Way.

He Was Homeless Before He Found Success

Steve admitted to People magazine that he ended up living out of his car and
showered at gas stations or swimming pool showers; while he continued to try to
find steady work.

He also partially owns a dating site called Delightful, which includes videos of
him doling out his sage professional advice.

He Never Saw Himself As A Game Show Host

Steve admitted that when he was first asked to host variety and game show programs,
it wasn’t something he saw himself ever doing. However, it was agreed to allow him his own sense of humour, everything fell into place.

Living out his dreams, Steve Harvey Aside from meeting and as well hosting quite a number of other famous people share the same Birthday with the following persons.

The likes of Michelle Obama, Muhammad Ali and Betty White, amongst others. He has also hosted Joel Osteen, Barack Obama, and many others, including Donald Trump.

In 2006, Harvey was felicitated with the Honorary Doctorate Degree from
Alabama State University.

Meeting With Kevin Hart and Collaborating With Ellen DeGeneres:

Did you know that Steve and Kevin Hart have crossed paths on Steve’s game shows
– ‘Harveys Hundred?’ Steve was surprised to see Hart at the show as a ‘gamer.’

Fortunately, Kevin won the game and gave the prize money to a lucky member of the audience. In addition, he has once co-hosted a show – Little Big Shots with Ellen DeGeneres.

This table provides a breakdown of Steve Harvey’s Bio.

Now you know about Steve Harvey’s Biography and Childhood Story.  We expect that you share your experience with us.

Our hope is that you found this write-up interesting and enlightening too. We guarantee you more biography facts with top-notch accuracy and fairness come rain, come shine.

I like Steve Harvey, he’s funny, nice looking and a Christian. His parents did well. I hope he is always cordial to people and not like some movie stars. God has been very good to him and hope his success never goes to his head. He appears to be a very nice person. Thanks Steve for all you do.