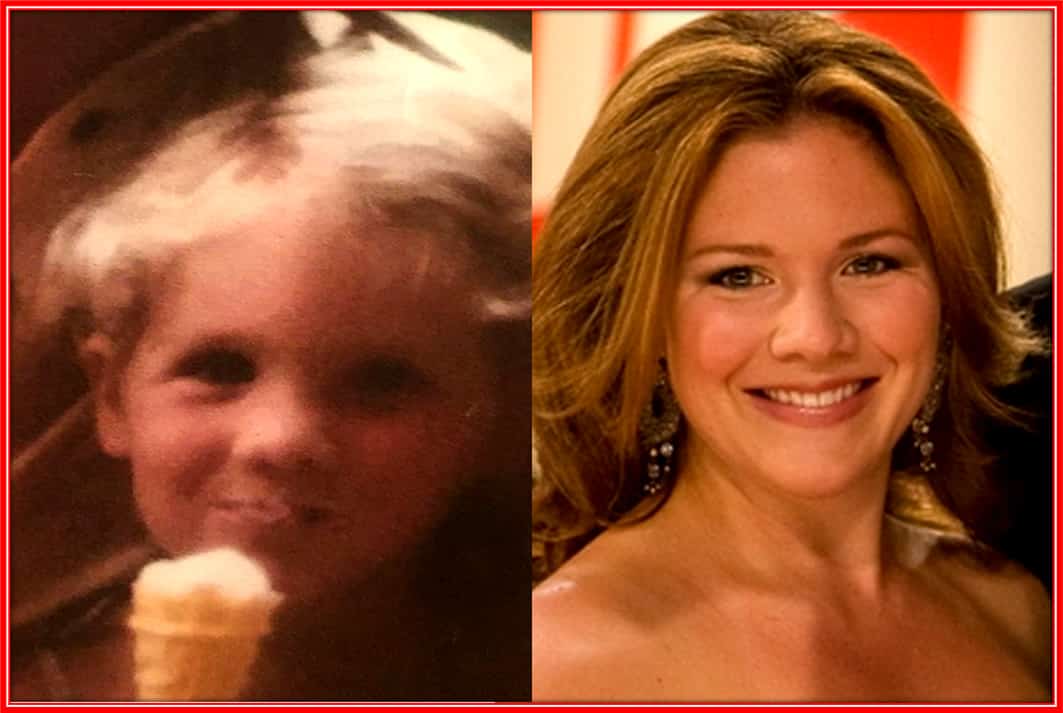 In essence, Childhood-Biography’s version of Sophie Gregoire life story right is a summary of significant events in her early years, starting from when to was a child to when she became Famous.

Sophie Grégoire has not only attained fame as the first lady of Canada. She has also built a reputation for herself through her former job as a television presenter.

Rome, as they say, was not built in a day. Likewise, Sophie has gone through a lot of ordeals in her life story before attaining the level of fame she is celebrated for today. Read her Bio the end as we unravel the mystery of how she suffered from an eating disorder and many more interesting facts.

Starting off, Sophie Grégoire Trudeau was born on the 24th day of April 1975 to her father, Jean Grégoire, and her mother, Estelle Blais in Montreal, Québec. She is the only child born of the union between parents. Pictured below is a rare photo of Sophie’s Childhood.

Sophie enjoyed every moment of Childhood and ensured she keeps and reminisces on the most captivating memories of her Early Life. She often recounts the joy she drives in making friends with other kids. Hence, in her opinion, her Childhood was a happy one.

Being born in Québec does not mean that Sophie’s Family Roots completely originates from Canada. As a matter of fact, her paternal ancestry is fully traced down to France. No wonder her Ethnicity is of French-Canadian descent.

On the other hand, Sophie’s maternal ancestry is majorly affiliated to Canada. Surprisingly, our famous Canadian celeb has displayed a minor form of French related accent in her speech. Truth is, Sophie is fluent in speaking English and French.

Little Sophie was born into a middle-class family Background. As a kid, her parents provided for her all the brands of toys she had ever wanted. Life seemed to be quite balanced for the young lass who only thought about making friends with other kids.

Surprisingly, Sophie befriended her classmate, Michel Trudeau, son of the then prime minister of Canada, Pierre Trudeau. Michel would end up becoming her brother-in-law. Unfortunately, her childhood friend Michel lost his life in an avalanche on 13th November 1998.

Sophie spent most of her Early Life in Sainte-Adèle. However, her family moved to live in Montreal’s Mount Royal suburb when she was four years old. Growing up in Montreal, Sophie underwent a consistent routine of going to school, doing her homework, and playing with other kids in her spare time.

To give you a detail of her academic performance, Sophie was an obedient and good student. She took her studies seriously and loves to venture into outdoor sporting activities while in school.

Moving into high school, Sophie studied diligently at the private Pensionnat du Saint-Nom-de-Marie in Outremont. To tell you the truth, the young Canadian spent the luxury of her time studying hard to become a stockbroker like her father. But some career decisions do not always turn out to be as captivating as we initially visualized it.

In pursuit of walking in the footstep of her father, Sophie enrolled to study commerce at McGill University. It didn’t take long before the Canadian first lady changed the course of her career pursuit.

Haven nurtured the courage of moving into a different career path, Sophie hastily enrolls in studying a communication-related course. Fortunately, she barged a Bachelor of Arts degree in communications from the Université de Montréal.

Upon graduation from the University, Sophie Grégoire got her first Career job as a receptionist and assistant in an advertising firm. She worked diligently to see herself rise to the prominent position of account manager in the firm. After working with the firm for three years, Sophie finally took a new direction in pursuit of a better Career Life. Fortunately, she found her true calling as she enrolled to study at a radio and television school.

Working her way up the ladder of fame turned out to be pretty much difficult than Sophie had envisaged. At first, she struggled to deal with Bulimia Nervosa, an eating disorder when she was 17. For three years, Sophie had to take several yoga classes and undergo therapy to recover from the disorder.

By the time Sophie was 20 years old, she had recovered from her illness and moved on with her life. As time goes on, Sophie continued to build her portfolio as she landed several jobs like serving as an entertainment reporter for LCN’s daily Showbiz segment.

The life of Sophie was never going to remain the same as she started to host different renowned television shows. As a matter of fact, Sophie Co-hosted the Radio Canada’s Coup de Pouce program and the CKMF Radio morning shows. In addition to her aforementioned achievements, she was also the host of Canal Evasion’s Escales de Reves and Canal Z’s Teksho.

Fast forward to the time of writing this Life Story, Sophie has not only immersed herself in her career endeavors. She has also exhibited her love for her country by engaging herself in charity works and taking part in the dealings of non-profit organizations.

Funny enough, our famous Canadian first lady composed a song in honor of Martin Luther King, Jr. Day. She titled the song “Smile Back at Me“ and presented it on the 18th day of January 2016. Her presentation earned her a standing ovation from the audience who applauded her for a job well done. The rest, as they say, is history.

Our Canadian first lady has been involved with only two men since her Rise to Fame. At first, she dated Patrick Huard, a Canadian actor before meeting Justin Trudeau whom she later married. Take a look at the picture of her first boyfriend below.

Sophie had met Justin Trudeau when she attended the same school with his younger brother, Michel. Fortunately, Sophie and Justin reunited in 2003 and started up a serious relationship. A few months after dating, the love birds took the next step and got married in a Catholic church in May 2005.

At the time of writing this Biography, Sophie is still married to Justin Trudeau. Her marriage with the Canadian prime minister gave rise to the birth of three children, namely Xavier James, Ella Grace, and Hadrien.

Being born as the only child of her family, Sophie has enjoyed the absolute attention of her parents. To tell you the truth, she really looks up to her father and mother as her role model. Below is detailed information on every member of her extended family.

One can not help but applaud Sophie Grégoire’s mom for a job well done in raising the revered Canadian first lady. As a Franco-Ontarian nurse, Sophie’s mother, Estelle Blais, has always prioritized raising her daughter into becoming a respectable person over anything else. Even though her schedules were tight, Sophie’s mother always ensures she spends some quality time with her daughter.

It is no longer news that the earliest motivation of Sophie’s career path is her dad. Unfortunately, the former Canadian television host could not meet up to the demands of commerce-related endeavors like her father. Sophie Grégoire’s dad, Jean Grégoire, was a stockbroker who looked after the welfare of his family. She has often expressed her overwhelming appreciation to her father for giving her a great childhood experience more than she could ever wish for.

Since Sophie is the only child of her family, she has no brothers or sisters. Also, she does not have any adopted siblings. However, Sophie has made friends who have assumed the roles of brothers and sisters in her life.

Moving on to her ancestry, Sophie’s paternal grandparents are Jacques Grégoire and Madeleine Lampron. On the other hand, her maternal grandfather and grandmother were Gerard Blais and Aline Lafleur. Having no siblings implies that Sophie has no nephews or nieces. Also, the press and social media have not really placed any focus on her uncles and aunts.

As a mother, Sophie has come to an understanding of the difficulties faced by many women and children in the society at large. Hence, she has always stood as a mediator and spokesperson on behalf of the welfare of women and children.

Away from her career endeavors, Sophie is a woman that many people would always dream to have as a mother. Reason being that she has often made sacrifices to ensure she brings her family together. On many occasions, Sophie has given up a lot of her schedule for the purpose of spending time with her children.

Do you know?… Sophie usually kills boredom by dancing during her free time. She disclosed to the media during an interview that she loves doing Zumba (a kind of dance). Furthermore, it is difficult to talk about Sophie’s hobbies without mention Yoga. As a matter of fact, she practices and teaches yoga frequently.

Working in the communication industry has yielded an enormous amount of financial proceedings for Sophie. As a matter of fact, Sophie Grégoire has an estimated Net Worth of $10 million. An analysis of her spending pattern shows that Sophie lives a luxurious Lifestyle.

In the spirit of keeping her family together, Sophie also lives in her husband’s official residence at 24 Sussex Drive in Ottawa. We can’t deny the fact that Sophie may have her personal house and luxurious cars. However, she hardly talks about her assets as she sees it as a major distraction.

To wrap up our Sophie Grégoire Trudeau’s Life Story, here are a few facts that would help you get a glimpse of her Biography.

Being fully fascinated by her role as a full-time mom, many people have asked Sophie how she spends her time with her children. In response to people’s curiosity, the Canadian mom replied that she usually bikes or walks her children to daycare.

She also stated that her usual routine in winter is to take her children out for skating and playing in the snow. On several occasions, Sophie usually spends time with her husband and children solving puzzles.

In March 2020, Sophie Grégoire became the 158th Canadian to test positive for the Corona Virus. Without wasting time, she and her family went into 14 days of isolation to prevent the spread of the virus. Fortunately, Sophie declared on 28th March 2020 that she had fully recovered from the virus infection.

Our Canadian first lady has always been on the lookout for justice and fairness in the society. I would say that her religious belief has contributed a fair quota of her moral inclination. In case you are not yet aware, Sophie is a Christian. She and her husband held their marriage ceremony in a Catholic church. Sophie has undoubtedly raised her kids in the Christian faith.

Below is the wiki knowledge-base of Sophie Grégoire Trudeau Biography. The table will efficiently help you find information about her. Find below.

You and I can’t deny the fact that Sophie’s focus to bring her family together is quite fascinating. Rarely a few celebrities in the 21st century have been able to keep their families together without talks of divorce flying in the air. But our Canadian superwoman did it.

Hence, we can also pull our family together and live in harmony if we also chose to act as the epicenter of our home. Whenever we give fair attention to family life, we would end up propelling ourselves and our loved ones into an unimaginable height of fame.

Thank you for reading our Sophie Grégoire Trudeau Childhood Story and Untold Biography. We are always opened to your opinion on our articles. Hence, leave us a comment about your satisfaction. Finally, contact us if you find anything that doesn’t seem right in our Sophie Grégoire’s Life Story.