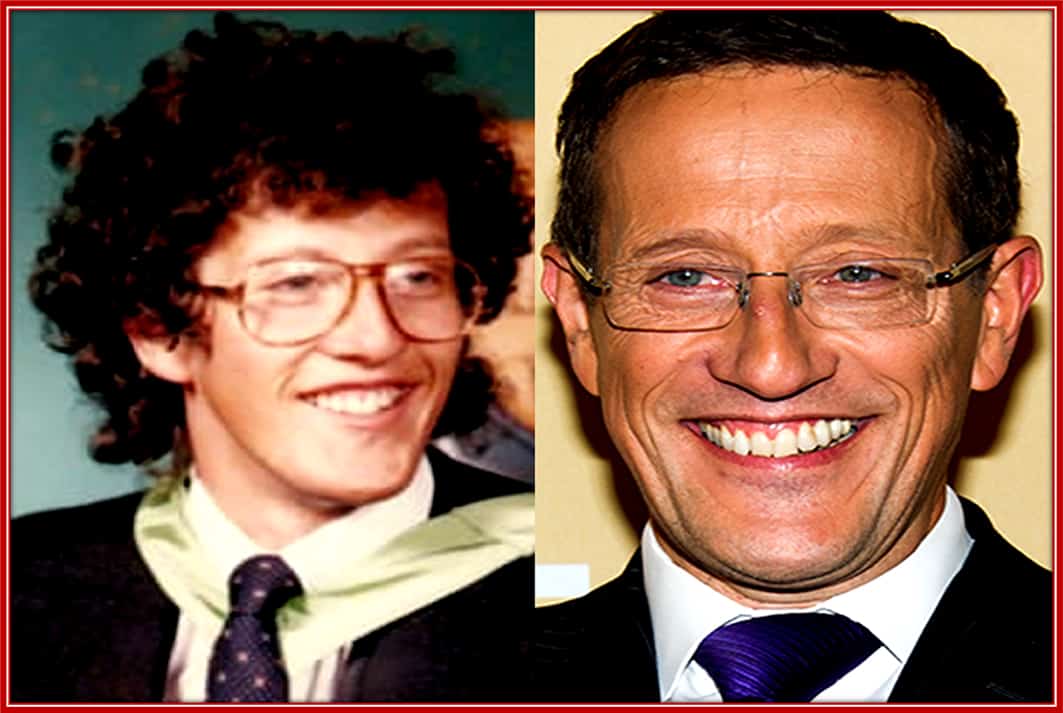 In clear terms, our article provides you in-depth information on his life story, right from his early days to when became famous in Journalism.

Yes, you and I know of his explosive mental energies, agileness and distinctive style of anchoring. However, only a few have taken time to read Richard Quest’s Biography which is really insightful. Now, without further ado, let’s set the wheels in motion.

For bio starters, the CNN International Anchor bears the nickname ‘Marmite Man‘. Richard Austin Quest was born on the 9th day of March 1962 in the city of Liverpool, Merseyside, England. The English Journalist is one among 4 children born of the union between his mother and father whom not much is known about.

If you think he is US national because he works with CNN, then you’ve got the wrong fact. Did you know… Richard Quest’s parents aren’t entirely British either. Truth is, the CNN Business Editor has Jewish ancestry. There are also unverifiable records which indicate that his dad did change the family name to Quest in the year 1948.

Did you know that British CNN journalist grew up in Liverpool alongside three sisters? one of them is his twin sister who goes by the name Caroline (yes, you read that right! Quest does have a twin).

Growing up in northwest England, Quest was only a kid when he fell in love with broadcast Journalism. Back then, he would often wake up early for the purpose of listening to Morning Meyerside on BBC radio. While the youngster was at it, he got fascinated by the idea of sound travelling through thin air to a radio receiver.

The British CNN man isn’t come from a wealthy home but rather a household full of informative minds. Quest’s educated middle-class family were big on keeping themselves abreast of happenings in the world by reading newspapers that includes the Daily Express. In fact, another term that could best describe Quest’s household was a ‘Daily Express family’.

When Daily Express went tabloid, the family turned to The Daily Telegraph and Quest’s love for broadcast journalism only got intense by the years. He kept the passion alive during his studies at state comprehensive Roundhay School in Leeds.

Upon graduation, Richard Quest parents ensured he goes to study at Airedale and Wharfedale college. Subsequent academic endeavours saw the broadcast enthusiast going on to studying law at the University of Leeds in 1983. Before clinching the degree, Richard went to Vanderbilt University in Nashville, Tennessee on an exchange program. There, he did well.

It was during the exchange program that the future CNN anchor took his first significant step into broadcast journalism. His passion saw him becoming the news director of the university’s campus radio station WRVU. In fact, he did well to help build the Campus Radio’s reporting staff from scratch!

The CNN Business Editor got his Law degree in 1993 and was called to bar. However, he chose to build a career in broadcast. To that end, he became a trainee journalist at the BBC in 1985 and was officially a part of BBC’s financial section crew in 1987.

Moving up the ladder of career success, the rising journalist was drafted to the United States of America where he was made to function as a business correspondent for BBC’s News 24 channel. The transfer was no doubt the turning point of Quest’s career as it brought him closer to working with American news-based pay television channel – CNN.

Good old viewers of BBC’s News 24 channel would have no problem remembering an enthusiastic Quest discussing the world stock market with Paddy O’Connell in a regular segment known as World Business Report between 2:00 am and 3:00 am (GMT). Asides reporting, the rising journalist was an occasional presenter on the BBC’s early-morning Business Breakfast programme.

Biography of Richard Quest- The Rise To Fame Story:

2001 was the year the Business Traveller eventually joined CNN. Richard began helping the American news outlet run their Business International which was a new program at the time. Since then, he has covered a variety of different events for CNN.

Fast forward to July 2020, Quest has worked his way up to become CNN Business Editor at Large. He does also anchor the business program – Quest Means Business and spearheads the CNN’s ‘Business Traveller.’ Whichever direction things take for him in the future, the rest, as they say, would always be history.

Who is Richard Quest Gay Lover?

Like CNN’s Don Lemon, many never knew his sexuality until he came out of the closet in October 2018, during a visit to Kenya. A few months later in May 2019, Quest took to his Instagram page to share the news of his engagement to his gay lover Chris Pepesterny.

Not much is known about Chris Pepesterny but we do know that the lovebirds were meant to wed in May 2020. However, they had to reschedule due to the incidence of coronavirus pandemic. It would definitely not be long before the duo become couples.

Many Great TV anchors are products of stable homes and the CNN Business anchor isn’t an exception. Here, we’ll bring you facts about Richard Quest’s parents, siblings and relatives. Without further ado, let’s get the ball rolling.

Did you know?… The anchor’s little known dad was a lawyer who later became a medical doctor. On the other hand, little documentation exists about the mother of Richard Quest. One thing, however, is sure. It is evident that Richard Quest’s parents did well in affording him a quality upbringing. He has happy memories of them and do what he does to make them proud.

Like we did note earlier, the popular CNN man grew up alongside three sisters. However, we only know of his twin sister who goes by the name Caroline. She chose to tread the path of an academic and went on to become director of enterprise and business development at Britain’s University of Leicester.

They should exist and probably in the UK. Away from Richard Quest’s Parents and siblings, not much is known of his ancestry particularly as it relates to his maternal and paternal grandparents, aunts and uncles, as well as cousins, nephew and nieces.

Getting to know his personality off CNN screens would help you get a better picture of him. While getting to know him, you’ve probably asked?… Who is Quest behind the great big smile and very enthusiastic attitude that he exhibits on TV?

Another question on Richard Quest personal life is that which says… What is the content of his character off-screen? You’re just in time to get facts about his persona which is similar to those of individuals whose Zodiac sign is Pisces.

Truth is, Richard Quest is interesting, warm, entertaining, emotional, likeable and open to revealing facts about his private and personal life. Whenever the TV anchor is not working he can be found trying to keep fit, travelling, reading among other interests and hobbies. Need we mention that he loves the loving company of family and friends? We guess it’s quite obvious.

Regarding how the TV anchor makes and spends his money, do you know that he has a net worth of $4 million as of July 2020? The Wages and Salaries that he gets from his Job at CNN are Known sources of his wealth while lesser-known sources take the form of grants and investments.

Thus, it would be quite easy for Richard to flaunt cars and houses like music artists and actors. However, he chose to live a conservative lifestyle which makes it hard to comprehensively track his spending patterns.

To wrap up our Richard Quest’s childhood story and biography, here are lesser-known facts about the TV anchor.

Did you know that Quest didn’t jump on an opportunity to work for Aljazeera English news channel in 2006? The offer was quite tempting but quest had to decline “on the grounds that being gay and Jewish might not be suitable”.

First and foremost, he isn’t a Christian. Quest had a religious Jewish upbringing which is still a part of him till date. Although the TV anchor does not longer adhere to dietary restrictions he still feels Jewish anyway and would always love to identify as a jew.

2020 was quite a frightening year for a number of prominent Americans that tested positive for Coronavirus. Like his CNN colleague – Chris Cuomo, Richard Quest tested positive too but fortunately recovered.

Fact #4 – Is Richard Quest an Author:

The journalist is an author who has one book to his credit. The title of the book is – The Vanishing of Flight MH370: The True Story of the Hunt for the Missing Malaysian Plane. Yes, you guess right, Quest did extensively cover the story, hence his decision to write a book about the events.

Did you know that John F. Kennedy was president of the United States when Richard Quest was born in 1962? Singers like The Beatles and Bob Dylan were still very popular in 1962 while the classic movie – To Kill a Mockingbird hit cinemas that same year.

Use the table below to get quick and concise information about Richard Quest.

Among many versions of Richard Quest’s Biographies, we thank you for stopping by for ours. No doubt, his childhood passion later turned into his work and today, his work has turned into his hobby.

While putting up this article on the Life Story of Richard Quest, our editors did their best to ensure accuracy and fairness. If you do see something that doesn’t look right on our Quest writeup, please don’t hesitate to place a comment in the box below.