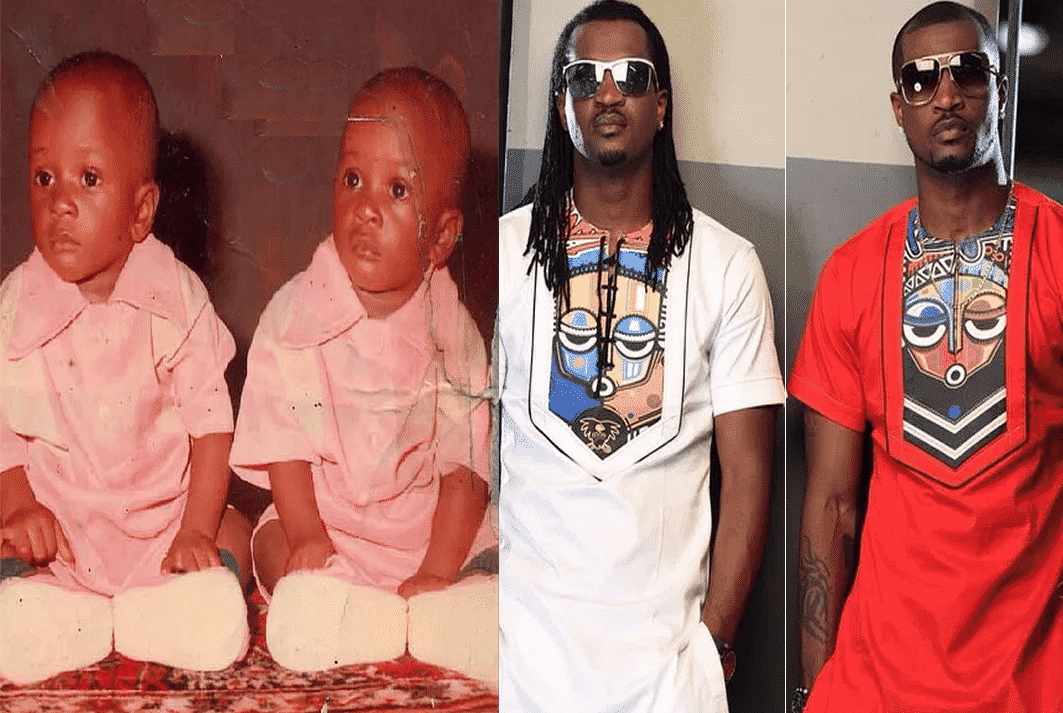 Childhood Biography presents the Biography of Paul and Peter- two Musical Geniuses once known by their Nickname ‘PSquare‘.

We bring you a full account of notable events from their childhood time to date. The analysis involves their life story before fame, relationship life, etc.

More so, ChildhodBio gives you information about PSquare’s family life, and other off and little-known on-screen facts about them.

Yes, everyone knows about the twins behind the name PSquare but few consider their Biography which is quite interesting. Now, without further ado, let’s begin.

For their Biography starters, the twins behind the nickname- ‘Psquare’ were born on the 18th day of November 1981 in Anambra state, Eastern Nigeria.

St Mulumba secondary school was the duo’s agreed choice because the school had a music and drama club.

They both took due advantage of the music and drama club to perfect their singing and dancing skills, mimicking songs by MC Hammer, Bobby Brown, and Michael Jackson.

Their unique singing pattern and energetic dance style made them household names in the city of Jos where they performed at school functions and other occasions.

Later in 1999, they applied to study Business Administration at the University of Abuja. Below is a photo of Peter and Paul with a university friend. 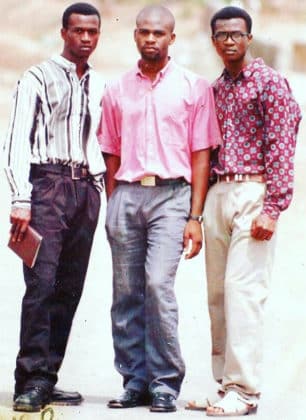 As admission was granted them, Smooth Criminals got disbanded. This led to the formation of a new group by Peter & Paul, which was initially called “Double P”, “P&P”, and “Da Pees”. They eventually settled on “P Square”.

While still in Uni they enrolled in a music school to develop their skills on keyboard, drums, bass, and rhythm guitar.

Their work includes the soundtracks for a number of films like Tobi, Mama Sunday, Moment of Bitterness, Evas River, to mention but a few.

It didn’t take time before they became famous in the whole of Nigeria, Africa, and the world. The rest, as they say, is now history.

For starters, Peter Okoye’s love story is centred around one lady. No other person than Lola. 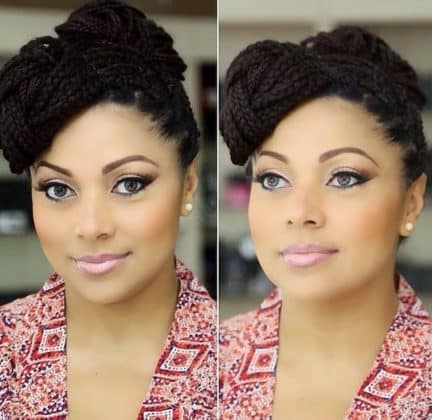 The relationship between Peter and Lola started many years ago, even before Peter became a celebrity.

Indeed, It takes extra courage for a man to walk up to a lady like Lola. Peter proved himself a man, following a brief story by Lola herself. This is Lola’s account of how they met

In her words; …“My agency handles some of British American Tobacco brands and P’Square was doing a show for us at one of our events in Enugu.

Though I had briefly met Peter a couple of times before then. At the show, there was some chemistry. He asked for my number, and I refused to give it to him.

I told him ‘if you really want to know me, you have to find my number’. So he took it as a task and found my number, and the rest is history.”

Lola is seven years older than Peter Okoye, though both lovers are never disturbed by their age difference. As Lola puts it; “Peter is an old soul, and he often tells me, he sees a 23-year-old lady in me. Indeed, age is just a number”. 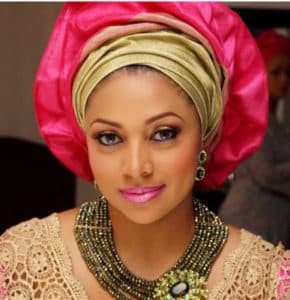 Peter, on a Tuesday, shocked many of his fans when he finally proposed to Lola Omotayo, his longtime girlfriend, with a diamond ring and a brand new white Range Rover Vogue he bought for 15 million naira. 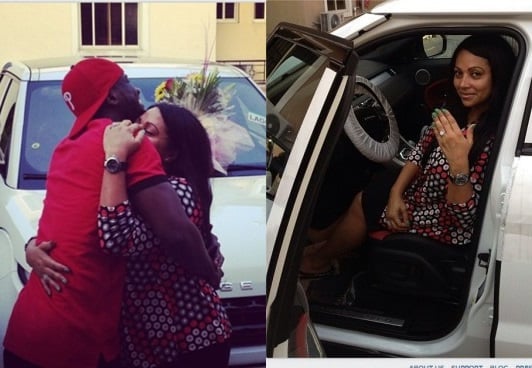 Lola, who said ‘Yes’ to the proposal, reportedly was close to tears when the musician slipped the diamond engagement ring onto her finger and handed the car keys to her.

Speaking on why he decided to propose to Lola, Peter said: “it is something I had always wanted to do, and I knew I would definitely do this to Lola one day, but I needed to wait for the right time. Honestly, she deserves even more from me.” he said.

Their traditional wedding was probably the party of the year. Peter Okoye’s wedding was attended by the most prestigious guests in the country. 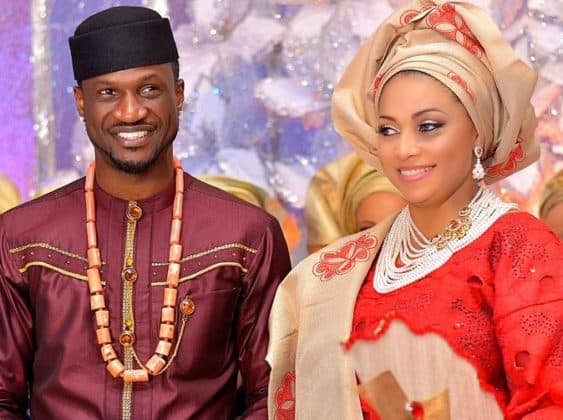 Mr. and Mrs. Peter Okoye are blessed with two kids, Cameron and Aliona Okoye, pictured below. 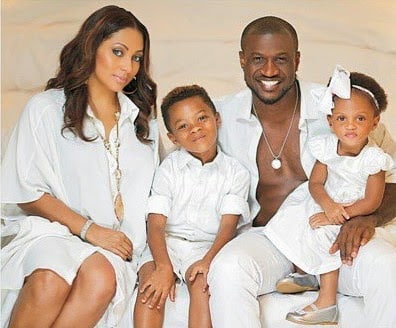 Peter, in a Punch interview, said: “For us, every day is Valentine’s Day because we never fail to express our love for each other every day.”

It was a friend-became-lover story for Paul and Anita, who appears to be his first love. Anita was a freshman while Paul was in his final year when they met at the University of Abuja, Nigeria.

Paul started crushing on Anita, and a little after, they became friends. It was all casual at first. Anita was just 16 years old at the time so Paul stayed responsible and formal until Anita hit adulthood.

As Anita clocked 18 years old, they both officially started dating. From all available information, Anita is Paul’s first love.

The ride wasn’t so smooth for Paul at the early stage. His first visit to Anita was not fun. Anita didn’t allow him into the house.

The lover-boy didn’t give up but had to up his game. He bought her the first Valentine’s Day gift- a movie, which starred Genevieve Nnaji, because Anita was a big fan of Genevieve.

They started loving each other, and on this blissful day, Paul took Anita to a jewellery store and asked her to pick any diamond ring of her choice; there were ten rings before her.

She made her choice, and right there, Paul dropped on one knee and popped the question, ‘will you marry me? Wow! What a sudden and spontaneous romantic gesture.

Anita was completely floored, all she could do was cry, and her answer is shown in the photo below.

Paul Okoye and Anita Okoye had their traditional wedding ceremony in 2014 and have legalized their union also at the Ikoyi Registry. 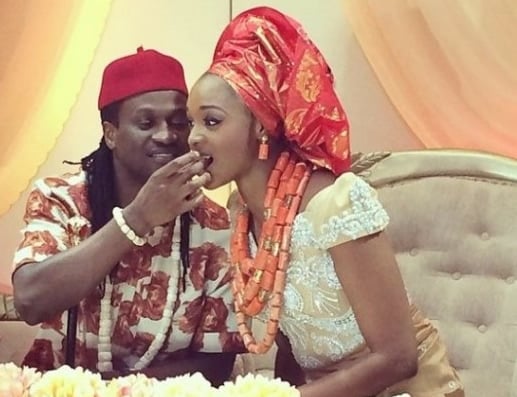 In an interview with Naija.com, Anita Okoye testified, “My marriage has been very interesting”. 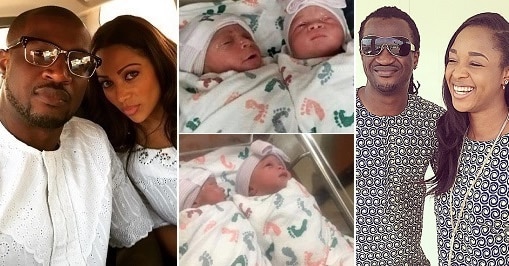 Having been blessed with their first son, Andre, and a set of twins, Nadia and Nathan, their marriage is indeed interesting.

They say “20 children do not play together for 20 years” but, Peter and Paul are not just friends but identical twin brothers. Notwithstanding, it appears like the ‘play’ between Peter and Paul has ended. Has it?

Vanguard Report confirms that a letter was sent to PSquare’s lawyer Festus Keyamo (SAN) by one-half of the twins, Peter, demanding the termination of their agreement as a group.

Social media has been on fire since PSquare fans started smelling breakup. Questions have been asked, sighting different comments and posts from Peter and Paul.

In an interview with Guardian Life, Peter to a question about PSquare break up, answers: “I no longer do family business. It is not healthy.”

Likewise, Paul wrote on Instagram not quite, saying; “Only a woman can come where there’s peace and destroy it”. Please, which woman is he talking about? Well, let’s not make it a debate but join forces and pray for Peter & Paul.

The Jos-based father of the sensational music duo, Pa Moses Okoye, hails from Ifite Dunu, Anambra State. He had a thriving pure water and bakery business in Jos.

Until Monday, November 24, 2014, he died of Cardiac arrest at about 11:30 pm at P-Square’s Omole mansion, popularly called Square Ville.

Pa Okoye a.k.a “Jagwa” as he was fondly called, was a man that believed in education for his children but, thank God for the talent, gift, and passion that has made PSquare outstandingly rich, by the way, the duo are not illiterates.

Mrs. Josephine Okoye the mother of PSquare is a wonderful mother of 7 children. As a pastor, she stood as a pillar and backbone to all her kids, especially PSquare. Sadly, she passed on shortly after a heart surgery in an Indian hospital.

Peter said their mother would be greatly missed, not just because she was their mother, but because she played a vital role in the success story of P-Square as he recounted,
”I can remember that she used to sneak us out at night then to attend shows without the consent of our father, who insisted that we must quit music to face our education,” Peter said.

Jude Okoye is an elder brother to wave-making twins, P-Square. He is a Music video director.

He is happily married to model wife, Ifeoma, former Miss Tourism beauty queen. They both have two daughters; Emma and Eleanor Okoye.

Although Jude’s job is producing the duos’ songs and directing their videos, he is ever conscious of his position and will not also hesitate to tell you that he is the boss.

In words in an interview; “P-Square rules the world but I own the world. So, ‘I’m the boss. I push them out because they are the brand, while I own and run the brand”.

Tony Okoye is the immediate elder brother of PSquare. Art has always been his way of life. Tony is a first-class graduate of Creative Art, University of Maiduguri.

He was exceptionally intelligent his lectures referred to him as an “asset”. Tony is the CEO and brain behind Ajehwears and his designs come from the true art of African culture and paintings and have been created since 1996.

PSquare wearing Ajehwears has given a face to Tony’s handy work. Celebrities now rock Ajehwears on a regular with Peter and Paul taking the lead.

Lillian Okoye is one of the PSquare sisters. She studied Public Admin at the University of Jos. Lillian is now a fashion and beauty consultant. She runs FIXX Beauty Shop, her Facial Make-Up and fashion business in Plateau State, Jos.

Thanks for reading our PSquare Childhood Story plus untold biography facts.

At ChildhoodBiography, we strive for accuracy and fairness in our quest to deliver you the Biographies of Famous Singers of the world.