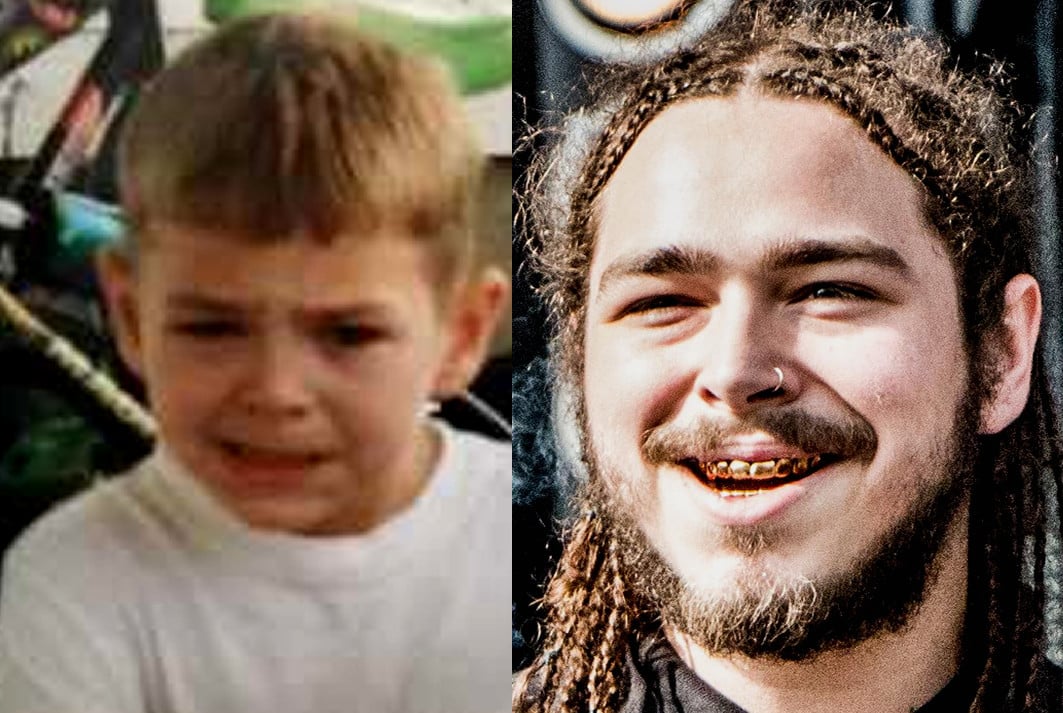 Our version of Post Malone’s Biography Facts, including his Childhood Story, brings you a full account of notable events from his childhood time to when he became famous.

Yes, everyone knows he is the fast-rising ‘rockstar’ rapper everybody is talking about.

However, only a few consider Post Malone’s Biography, which is quite Interesting. Now, without further ado, let’s begin.

Post spend much of his early life living with his dad and stepmother named Jodi.

According to Syracuse.com, his dad Rich Post and his wife, Jodie (Post Malone’s Step-Mother) met when they both worked at Atlas Health Care Linen Services, an industrial laundry business in downtown Syracuse.

Growing up in a middle-class family background in the New York State city, Post Malone initially lived with his mother in Syracuse, New York before moving in to join his father and stepmother to Grapevine, Texas.

While living in Texas, Post Malone shared his childhood experience with his stepbrother Mitchel, who was born before his stepmother met his father.

Back in Texas, Post Malones’ father worked for the Dallas Cowboys football team as a manager before later becoming an Assistant Director of food and beverage at the AT&T stadium.

Having a father who was a disc jockey during his youthful days, it was easy for little Post to fall in love with the trade.

Rich Post introduced his son to various genres of music including hip-hop, country, and rock while he was a little boy. He was a multi-talented dad who wanted Post to take over from where he left off.

Being moved by his dad’s love for music, Post Malone began teaching himself how to play the guitar through watching YouTube videos and playing a certain video game called “Guitar Hero”.

Later on, Malone proceeded to study at Grapevine High School where he focused on music and writing songs more than reading his books. 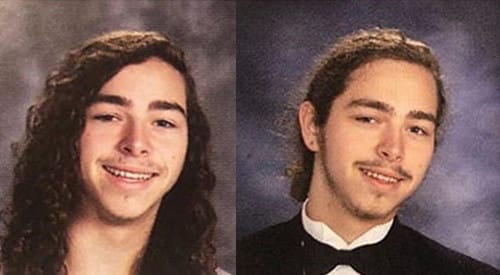 After his elementary education, Post Malone was admitted to study at Tarrant County College where he gave a final attempt to focus on his books, which failed. It didn’t take long for him to consider dropping out of school.

After dropping out of school, he moved to Los Angeles, California with Jason Probst his friend who happens to be a professional game steamer.

This decision became a game-changer as it easy for him to plunge into the world of music, creating a career for himself.

Malone kept up the vision and was actively involved in playing the guitar. Although there were challenges.

On a certain day, he partook in auditions for Crown the Empire in 2010 but was rejected after the strings of his guitar broke during the audition. Poor him!! 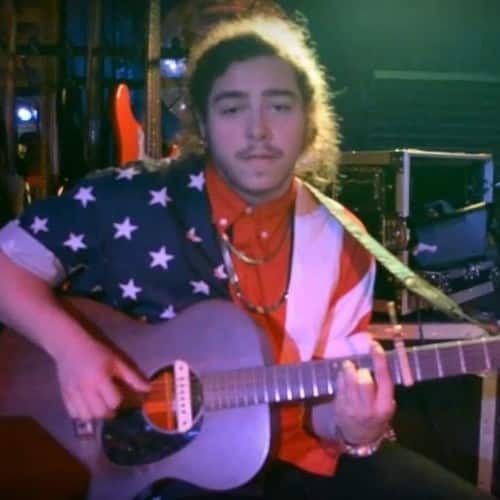 The Journey to pursue greatness continued as he sat down most times alone and making music beats for himself using the FL studio software.

Post also went on singing his beats from time to time enticing it by adding various guitar and other musical instrument effects plus recording.

In 2011, Malone produce his first hip-hop mixtape called ‘Young and After Them Riches’ This mixtape made him so famous in his college and the few fans he’d gathered began calling him- “The Most Likely to Become Famous”.

After the resounding success he had with his first mixtape, Malone quickly gained the attention of the record companies.

In no time, he signed his first contract of recording with the record seal Republic Records.

Did you know?… Before the contract signing with Republic Records, Post Malone was working with Chicken Express Restaurant in order to make some ends meet. 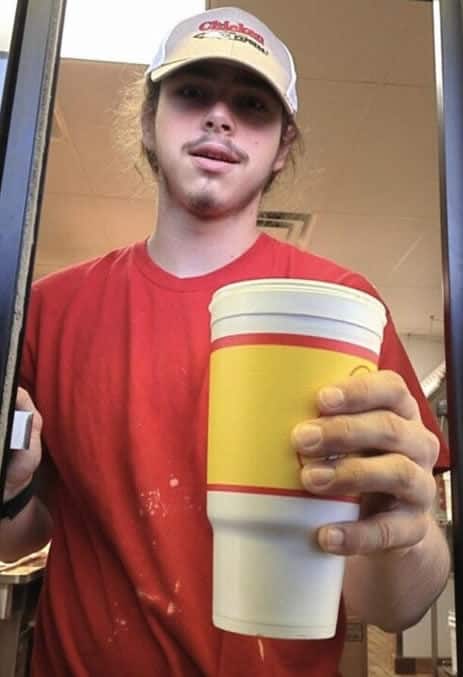 Being a bright representative of the American rap culture, an exceptional unique Record-Breaking Sensation, Post saw opportunities which he tapped greatly.

After lots of hard work and learning, he finally released what brought him the platform needed for his breakthrough.

Post Malone released his debut single White Iverson in 2015 which was certified quadruple platinum by RIAA. 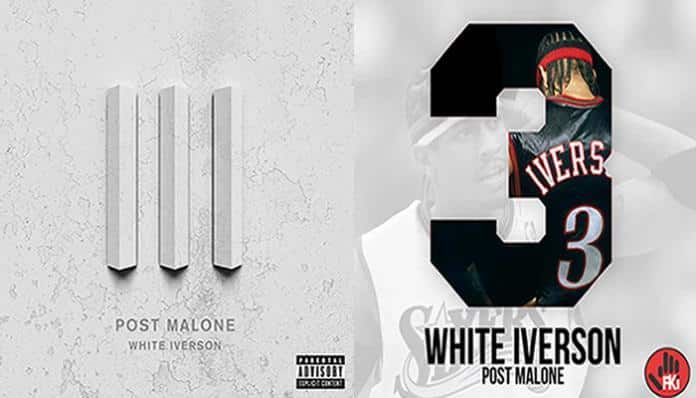 It didn’t stop there, in December of 2016, the rising artist released his first studio album titled “Stoney”.

This wonderful album saw itself toping Michael Jackson‘s ‘Thriller’ for most weeks in the top 10 of Top R&B/Hip-Hop Albums Chart. At this time, he knew he was going to be super-rich. 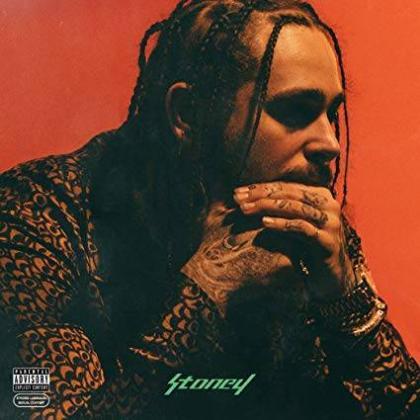 Achieving “Stoney” became a turning point which subsequently earned him a chance to rub shoulders with big stars.

Since then, Malone has had a successful collaboration with greats of music like Justin Bieber, 50 Cent, Young Thug, Kanye West, among others. 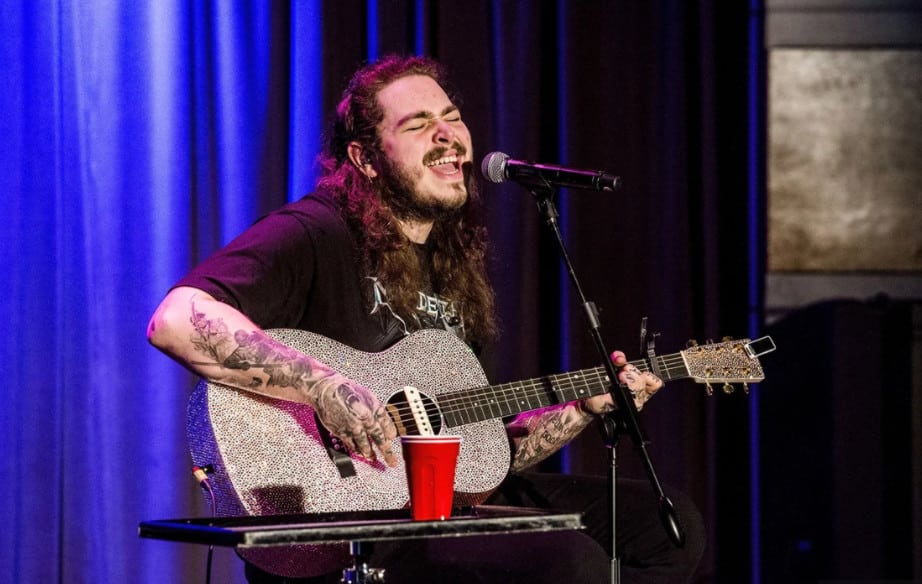 Behind the successful man, there existed a surprised woman rolling her eyes, one who later became his girlfriend. Post Malone is romantically linked with music producer Ashlen Diaz (born on December 19, 1995). 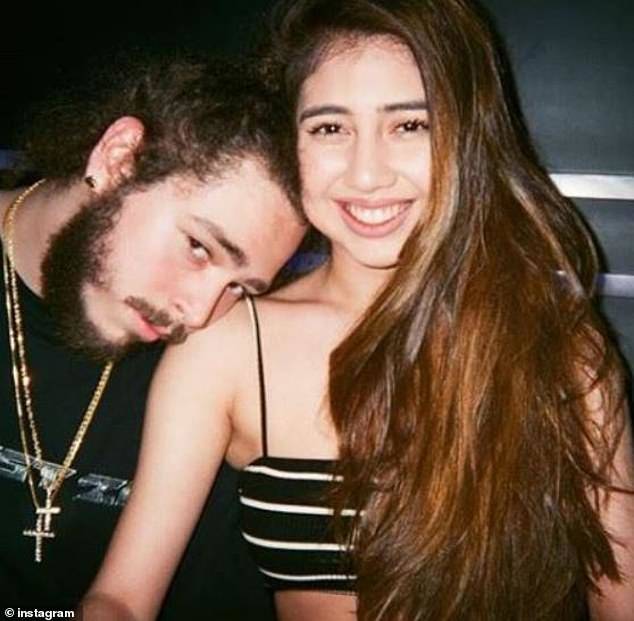 According to online reports, dating rumours started in 2015 and super girlfriend- Ashlen Diaz gained massive popularity after initiating a relationship with Malone. Getting to know her, Diaz is someone who had social anxiety and is of a shy nature.

Post Malone remains very private about his relationship issues, although the pair had their ups and downs.

They once had a brief split sometime after their first Breakfast Club interview. According to US Weekly In November 2018, the duo finally called their relationship off after dating for three years. 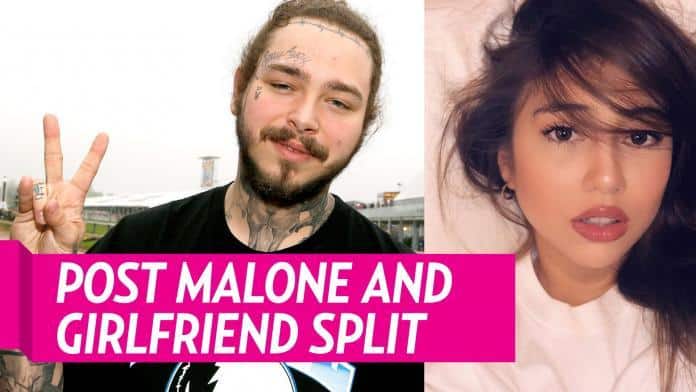 Getting to know Post Malone’s personal life would help you get a better picture of him. Starting off, he is someone who is very emotional and sensitive.

Post Malone cares deeply about matters of the family and his home, these qualities are said to be an attribute to his Cancer zodiac traits.

Secondly, Post is a huge fan of Bud Light Beer. Inside his numerous cribs, you will always find a Bud Light fridge which he restocked occasionally. He drinks it even while he performs on stage. 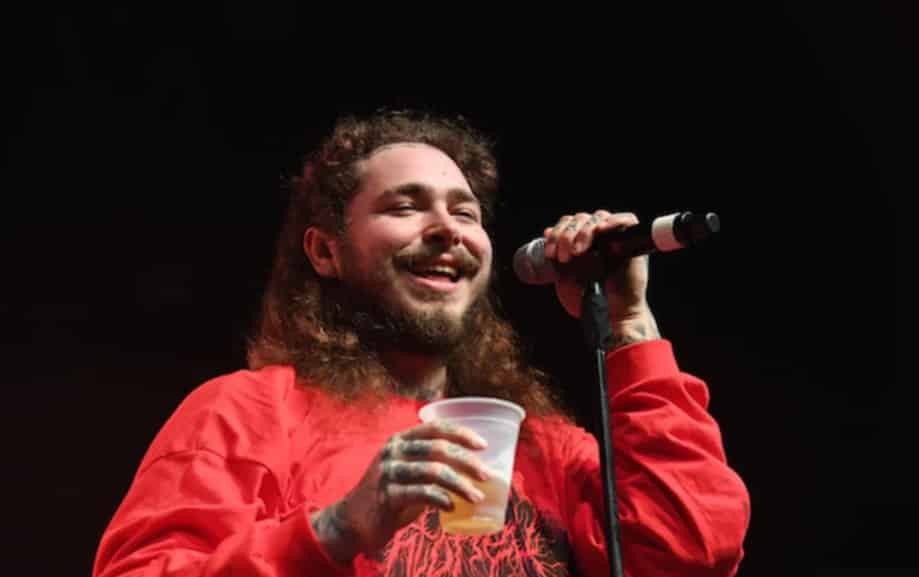 In his leisure time, he loves watching basketball and definitely, his favourite basketball star is Allen Iverson, a famous basketballer who inspired the name of his hit single White Iverson.

Malone’s personal life won’t be complete without mentioning his love for video games. He is a huge fan of video games with his favourite being Battlegrounds, Call of Duty WWII, etc. 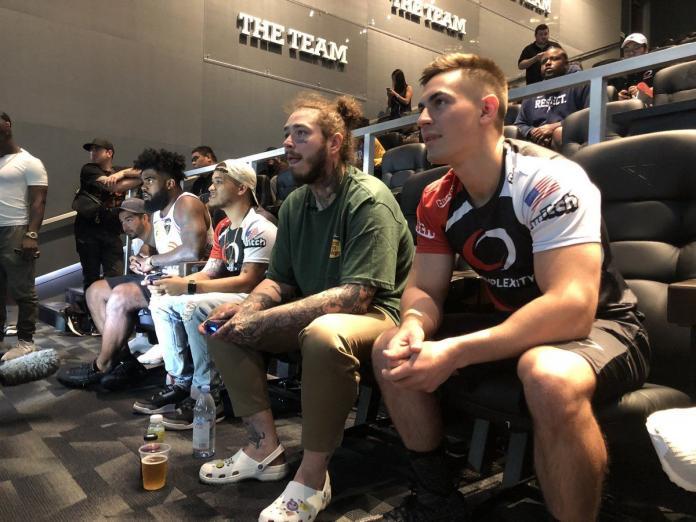 Malone didn’t come from the struggling, but rather a middle-class family background. Now let’s give you more insight into his family starting with his father.

Richard Lloyd Post is Malone’s dad, one who is regarded as the cornerstone of Malone’s career start and success.

Richard Lloyd was born on May 11, 1966, and grew up near Rochester in Penfield. 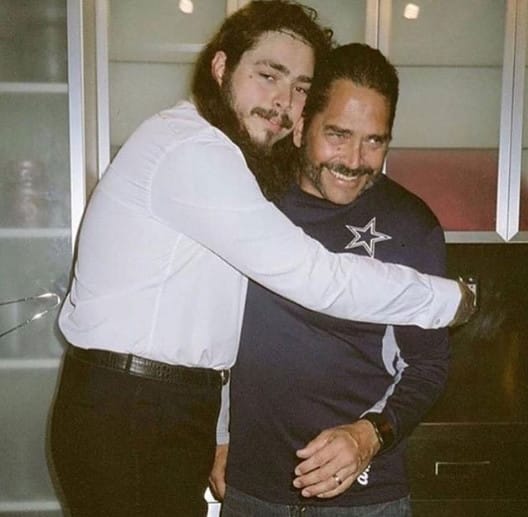 After graduating from Syracuse University in 1988, Rich spent 16 years in Syracuse. As at the time of writing, he still serves as the Assistant Director of Food and Drink at the AT&T stadium for the Dallas Cowboys football team.

Nicole Frazier Lake is Malone’s mom. Just like her husband, she is also from the same US state of New York.

She is from the village of Walton located in New York. Nicole at the later stage of her life moved to Texas to be with her son, keeping up a good mother-son relationship with him. 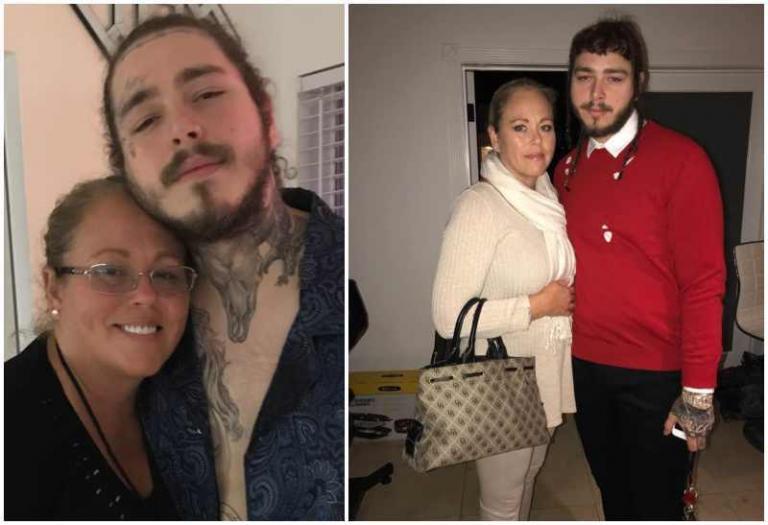 Jodie Larson Post is Malones’s stepmom. She was born on September 9, 1970, in Camillus, New York. Jodie got higher education at Le Moyne College in Syracuse. 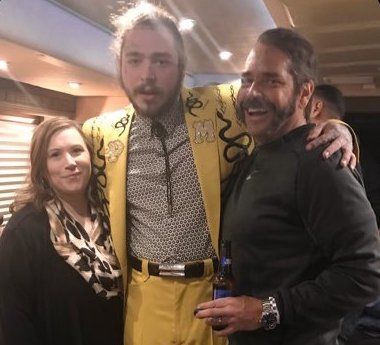 Before meeting Post Malone’s dad, she once had a failed married which resulted in a divorce. After the divorce, Jodie was alone with her son Mitchell (Post Malone stepbrother).

She met and fell in love with Rich Post while she worked at a Syracuse health centre. They got married and moved with their two children.

Mitchell Post is Malone’s stepbrother, born by Jodie. Both brothers grew up together in Grapevine, Texas. Mitchell was born before Malone’s stepmom met his dad. 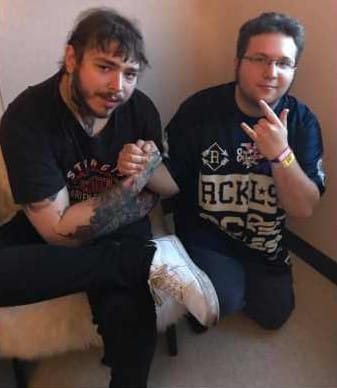 As of the time of writing, the superstar has an estimated net worth of $31 million. Having worth this much no doubt transcends into a glamorous lifestyle, which is easily noticed by having flashy cars, among other beautiful things.

One of the first goals of Post Malone was to get his dream car, a customized Lincoln Continental needed to step up his life. Lately, he also got himself a 2019 Bugatti Chiron.

Another sign of his affluent lifestyle is his ownership of several houses including his superb $3 Million Mansion in Northern Utah.

For Post, there is indeed enough monies to live a beautiful life. Indeed, his financial success is tied directly tied to his performance as a musical rapper, singer, songwriter, and record producer. 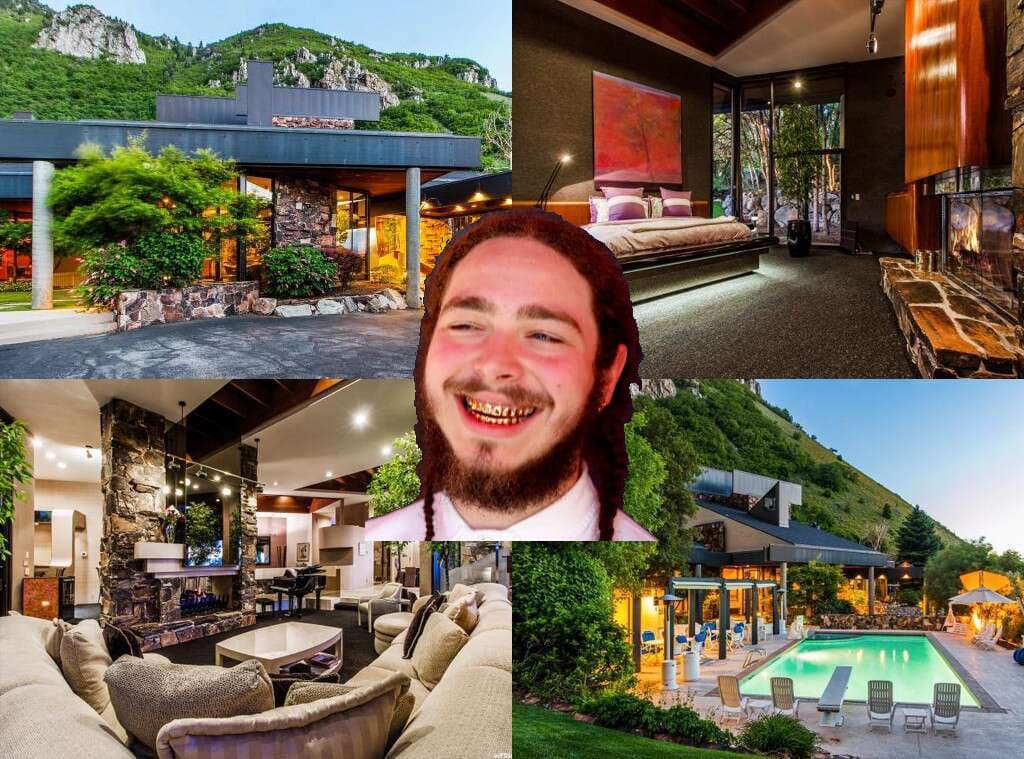 Regarding is religion, Malone’s religion still remains unclear as at the time of writing. However, he once admitted he use to be super religions. In his words;

“I used to be super-religious, I believed in God. But now I see through it. It’s nice to support something you believe in, I guess, but people are spending so much money, and God doesn’t care that your church has a f**king gold roof.”

Post Malone is well known for his array of tattoos. His first tattoo was a Pl*yboy Bunny. He also has a facial tattoo that says ‘Always Tired’ below his eyes.

Surprisingly enough, he inked by himself a variety of his tattoos designs. He also tattooed a few of his friends, a feat that makes him multi-talented.

Malone loves drinking and smoking, in fact, he smokes and drinks sometimes on stage while performing his music.

About his Real Name:

His real name is Austin Richard Post. Did you know?… He chose Post Malone as his stage name when he was 15 through a Rap Name Generator online.

His Honors in Summary:

At the time of writing, he has won two American Music Awards- a Billboard Music Award, and an MTV Video Music Award. Post has also been nominated for four Grammy Awards. 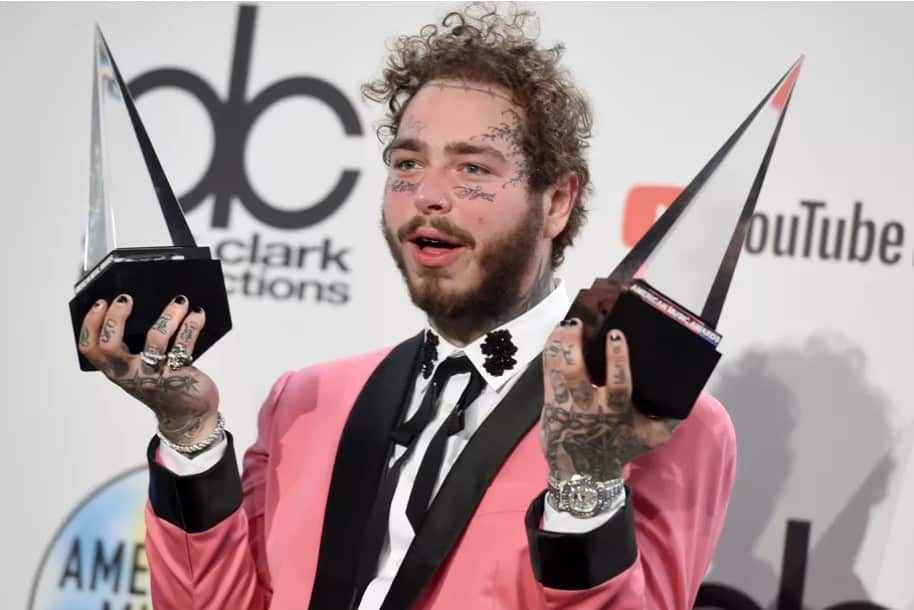 FACT CHECK: Thanks for reading our Post Malone Childhood Story plus untold biography facts. At childhood biography, we strive for accuracy and fairness. If you see something that doesn’t look right in this article, please place your comment or contact us!

Concise & informative to a certain extent. I came across this article after reading another piece about fans being extremely concerned about this young man’s health & welfare. After reviewing the video which accompanied that article I can certainly see that the concern is very much warranted so I decided to look a bit deeper as I have never heard any of his work & only know of him via media. My concern is for Austin.. not “Post”. Austin needs help & he needs it p.d.q. & if he does not receive that help you will soon be adding an… Read more »