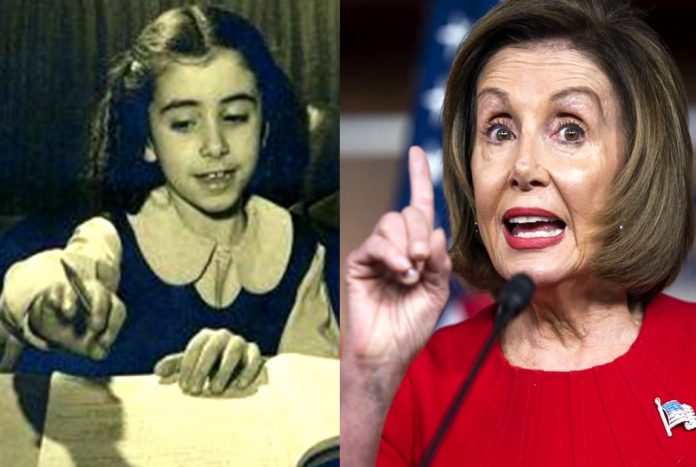 It’s a tale of notable events right from when she was a child to when she became popular.

Yes, everyone knows she is the first woman to serve as the Speaker of the US House of Representatives.

However, only a few consider Nancy Pelosi’s biography, which is quite interesting. Now, without further ado, let’s begin.

For Biography enthusiasts, Nancy Patricia Pelosi was born on the 26th day of March 1940 in the city of Baltimore in the USA.

She is the youngest of six children born to her mother, Annunciata M. “Nancy” D’Alesandro, and to her father, Thomas D’Alesandro Jr.

The powerful female politician is a bonafide American national, but not many know that Nancy Pelosi’s parents are of Italian ethnicity.

Also, did you know that Nancy grew up in Baltimore alongside her six older brothers? Nancy Pelosi’s brothers are Thomas, Franklin, Roosevelt, Hector, Nicholas, and Joseph.

READ:
Volodymyr Zelenskyy Childhood Story Plus Untold Biography Facts
Growing up at Baltimore, Nancy was the only daughter and youngest member of her family.
Having so many older male figures around her was enough to inspire fear, but Nancy’s political and religious upbringing taught her the art of warding off intimidation and being compassionately aware of the world around her.

To begin with Nancy’s political upbringing, her parents were very much into politics. In fact, Nancy’s dad was a congressional representative at the time of her birth.
On her part, Nancy’s mom was an organizer for Democratic women. Together, they taught Nancy the value of social networking during her early life.
Nancy Pelosi’s parents were also practising Catholics with a part of them desiring that their only daughter ends up in a convent. However, Nancy had no interest in becoming a nun.
Nonetheless, she did regularly attend mass at St. Leo the Great and was compassionate to locals who came knocking at their Baltimore home to seek food or favours from her influential dad.

Even when away from home and her local parish, Nancy was very much in tune with religious instructions, as it was a part of her studies at the Institute of Notre Dame, an all-girls Catholic high school in Baltimore.
Not one to lose sight of her interests, Nancy went on to consolidate on her childhood buildup in politics by obtaining a Bachelor of Arts degree in political science at Trinity College in Washington, D.C. class of 1962.

Before Nancy became a graduate, she was already very much into politics and was even present at John F. Kennedy’s inaugural address when he was sworn in as U.S. president in January 1961.
In the ensuing years, Nancy did serve as a graduate intern for congressmen Daniel Brewster and Steny Hoyer before moving to San Francisco, where her political journey began in earnest.

It was in San Francisco that Nancy became a member of the Democratic National Committee via election. Thereafter, she began to slowly work her way up in democratic politics.
Fortunately, the turning point of Nancy’s ascension came sooner in the year 1986 when an ailing Congresswoman – Sala Burton said she wouldn’t run for re-election.
Instead, she told Democrats to support Nancy as her successor. When Sala gave up the ghost in 1987, Democrats gave Nancy much support that saw her succeed Sala as Representative of California’s 5th District.
She took the oath of office not long after, during a momentous event that had her wheelchair-bound dad in attendance.

Not one to rest on her oars, Nancy rose fast in Democratic politics while maintaining her seat in the house of representatives.

While Nancy was at it, she did serve on the house Appropriations and Intelligence Committee before becoming the House’s first female minority whip in 2001.

When Minority Leader Dick Gephardt left Congress to seek the Democratic nomination in the 2004 presidential election, Nancy was made his successor and became the first woman to lead a major party in the House.

Roughly two years later in 2006, Democrats took control of the House and choose Nancy as their candidate for the speakership position.

Nancy rode on the waves on the Democrat’s unanimous support to defeat Republican John Boehner and became the first woman, the first Californian as well as the first Italian-American to hold the Speakership.
Although Nancy lost the position in 2011 when Democrats became a minority, she did regain her position in 2019.
She is still the house speaker at the time of writing and continues her fight for an increase in workers’ pay through strong economic growth as well as the cleanup of corruption to make Washington work for all. The rest, as they say, is history.

Away from her engaging duties in Congress, Nancy is a faithful wife to her husband, Paul Pelosi. The duo were both college students when they met and began dating.
They went on to tie the knot in 1963 and had 5 children in the space of six years.
Nancy Pelosi’s children include; Corinne (a hotelier), Christine (an author), Paul (a businessman) as well as Jacqueline and Alexandra.
Now on his part, Nancy Pelosi’s husband Paul is a business mogul. He is on the board of major organizations, and manages high-level real estate among other money-making ventures.
His marriage with Nancy is over 55 years old and ranks among one of the American celebrities’ longest marital Union.
There’s no denying the fact that the duo was made for each other. See the photo of Nancy Pelosi’s family- her husband, children, and grandchildren below.

Who is Nancy Pelosi without family and what could she have become if she wasn’t born to politicians? Sit back as we bring you facts about members of Nancy’s family members starting with her parents.

Thomas D’Alesandro Jr was born on August 1, 1903. He is of Italian family roots and was a politician for the most part of his life, with his notable offices being U.S.
A representative from Maryland’s 3rd congressional district (1939–47) as well as the mayor of Baltimore, Maryland (1947–59).
Until his death in August 1987, the supportive father of 6 had a close relationship with his daughter Nancy who honours his memory with her exploits at Congress.

Nancy’s mom Annunciata M. “Nancy” D’Alesandro is also of Italian descent. In fact, she was born in the city of Campobasso in South Italy.

It was Annunciata who taught Nancy more about social networking and became the greatest influence in the politician’s life.

Nancy further credits Annunciata for imbuing her with enough energy to lovingly raise children with love.

Nancy grew up with 5 older brothers. They include Thomas, Franklin, Roosevelt, Hector, Nicholas, and Joseph.

Thomas was an attorney and politician who did serve as the 43rd mayor of Baltimore from 1967 to 1971, while Hector was a court clerk.

Both Thomas and Hector are late, while not much is known about the rest of Nancy Pelosi’s siblings at the time of writing her biography.

On the flip side, Nancy’s maternal grandfather and grandmother were Nicola Lombardi and Concetta/Concettina Milio/Million.

The politician’s aunts include Verdula Minnie, Jessie Granese, and Mary Cardegna. However, not much is known about Nancy’s uncles. Neither are their records of her cousins, nephews, and nieces.

Let us move on to what makes Nancy Pelosi tick and the nature of her character beyond politics.
Did you know that her zodiac sign is Aries? She is assertive, energetic, hardworking, and exhibits intense passion in anything she sets her mind to.
In addition, Nancy has no problems with revealing facts about her personal and private life.
The politician’s interests and hobbies include reading, solving crossword puzzles, sipping hot water with lemon, and spending a good time with her family and friends.

Nancy has a net worth of over $16 million, which makes her rank 13th among the 25 wealthiest members of Congress.
The bulk of Nancy’s wealth has origins in the joint businesses she runs with her husband in addition to the salaries and wages she earns from nearly two decades of legislative duties.
As such, she lives a luxurious lifestyle with her husband as made evident in the value of their multi-million dollar house in San Francisco.
Being the 3rd person in the line of succession to the U.S presidency, Nancy has no problem flying jets on taxpayer’s money for important functions.
Neither does she run out of official and personal cars for cruising the good roads in her district.

To wrap up our Nancy Pelosi childhood story and biography here are little-known or Untold facts about the politician.

Democrat From Day One:

When Nancy was a kid, a republican gave her a toy elephant (symbol of us Republican) as a gift. Though Nancy was too young to understand the undertone of the gift, she did not accept it.

Nancy is a practicing Catholic. Like all true Christians, She professes faith in one true God and as well as looks forward to the resurrection of the dead and the life of the world to come.

Did you know that Nancy is a good fundraiser? In fact, she has no fewer than half a billion-dollar to her name in fundraising for Democrats. Isn’t she a valuable asset?

It is interesting to know that Nancy shared the same birth year with John Lennon. 1940 was also the year which The Great Dictator, starring Charlie Chaplin hit cinemas.
What’s more, it was the year that Franklin D. Roosevelt won an election to become the United States’ first third-term president.
Fact Check and Appreciation Note:

As usual, ChildhoodBiography appreciates you for taking the time to read Nancy Pelosi’s Biography. We care about accuracy and fairness in our continuous quest to deliver you the Biography of Famous Politicians.

Please Contact Us (via comment) if you notice anything that doesn’t look right in Nancy Pelosi’s Bio. Don’t forget to stay tuned for more related articles from this page. The Biography of Xi Jinping, Omoleye Sowore, and Atiku Abubakar might interest you.