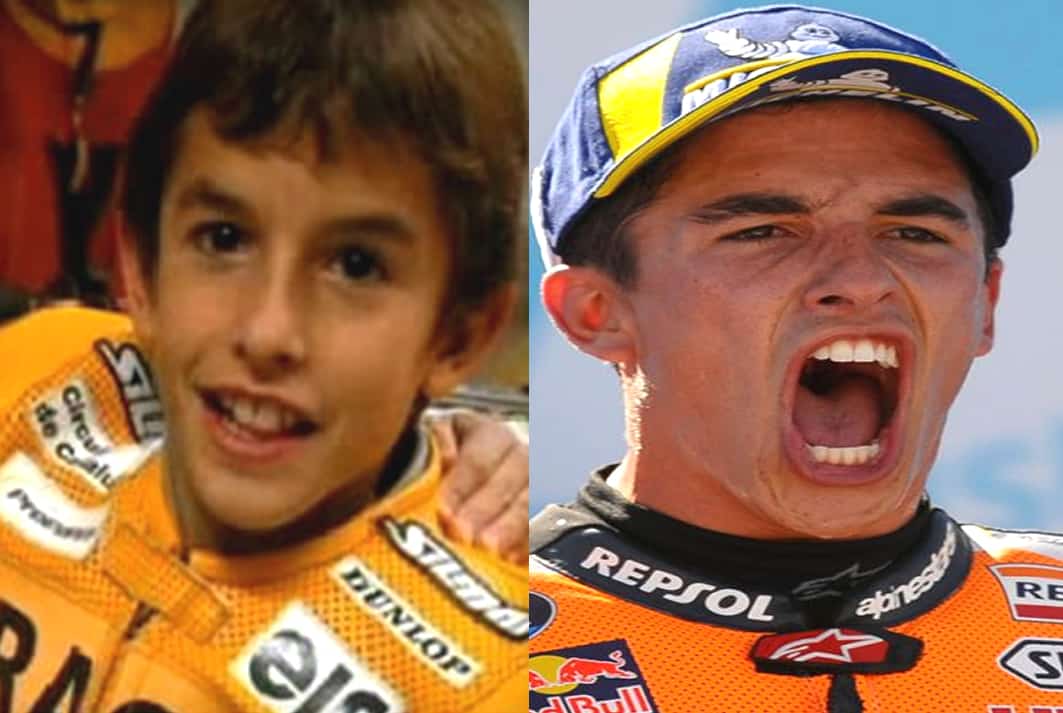 Childhood Biography presents the Full Story of a Spanish motorcycle road racer with the nickname “The Ant of Cervera“.

Our version of Marc Marquez’s Biography and Childhood Story brings you a full account of notable events from his childhood time to date.

Yes, everyone knows of his ability to take a leaning angle to the extreme when navigating corners. Also to note, Marc Marquez ruled the world of MotoGP before the likes of Enea Bastianini and Fabio Quartararo took over.

Despite the great things he has done for the MotoGP sport, we realize a gap. Truth is, only many fans have read a detailed version of Marc Marquez’s biography, which is quite interesting. Now, without further ado, let’s begin.

For starters of his Biography story, Marc Márquez Alentà was born on the 17th day of February 1993 at Cervera in Catalonia, Spain.

He was the first of two children born to his mother, Roser Alenta, and to his father, Julia Marquez. Behold Marc Marquez’s parents.

The Spanish national of white ethnicity with Catalan roots was raised at his birthplace in Cervera where he grew up alongside a younger brother – Alex, who he is about 3 years older than. 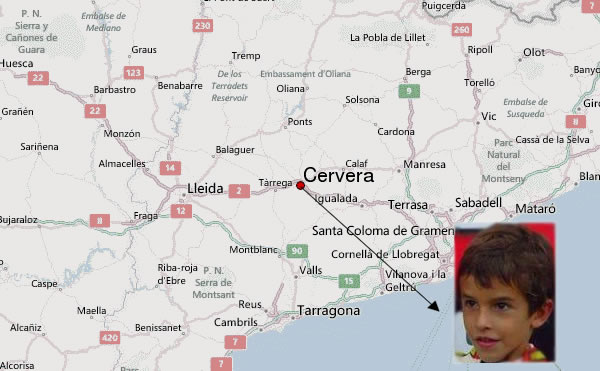 Growing up at Cavera, young Marc was practically raised around motorcycles.

He spent his infancy attending races with his father and uncle, who both worked as volunteers members of a local racing club known as Moto Club Segre.

His mom also volunteered in the club by preparing sandwiches.

By the time the bike racing prodigy was aged 4, he requested that his parents get him a motorcycle.

Marc’s parents happily obliged to his demand by getting him a small bike fitted with stabilizers to prevent him from falling over when riding it.

Marc was aged 5 when he declared his desire to become a motorbike racer. However, bodily growth and weight was a slow process for the racing enthusiast, especially during his basic education.

The condition was near a critical level that his parents had to make fruit shakes to help him grow.

The then petit kid only showed signs of catching up with his peers during the early days of his high school education.

Notwithstanding, organizers of random racing events found ways of making up for his weight deficit by attaching kilograms of lead to his bike in order to make it meet racing standards.

The history of Marc’s significant engagement in bike racing dates back to late 1990s when the then 5-6-year-old competed in a Spanish Enduro Race for youngsters with a 500cc bike.

He went on to contest the Catalan Motocross and Enduro Championships in 1999.

Subsequent race events saw Marc end up as a runner-up in the Catalan Motocross Championship held in 2000.

In 2001, he became a champion of the series and thereafter finished third in the 2002 Catalan Speed Championship.

2004 was the year which Marc upgraded to the 125cc class during a Catalan Speed Championship and finished second overall in the event.

The successful outing was followed up with championships wins in 2005 and 2006 in the same 125cc class.

Although the racer was regularly subjected to injuries arising from accidents after making his debut at the 125cc 2008 Portuguese Grand Prix, he braved all odds to win the 125cc world championship in 2010.

However, 2011 turned out to be the most challenging year of Marc’s career as he took a very long break after hitting his head during a crash in Malaysia.

The injury was so critical that Marc had to undergo eye surgery. 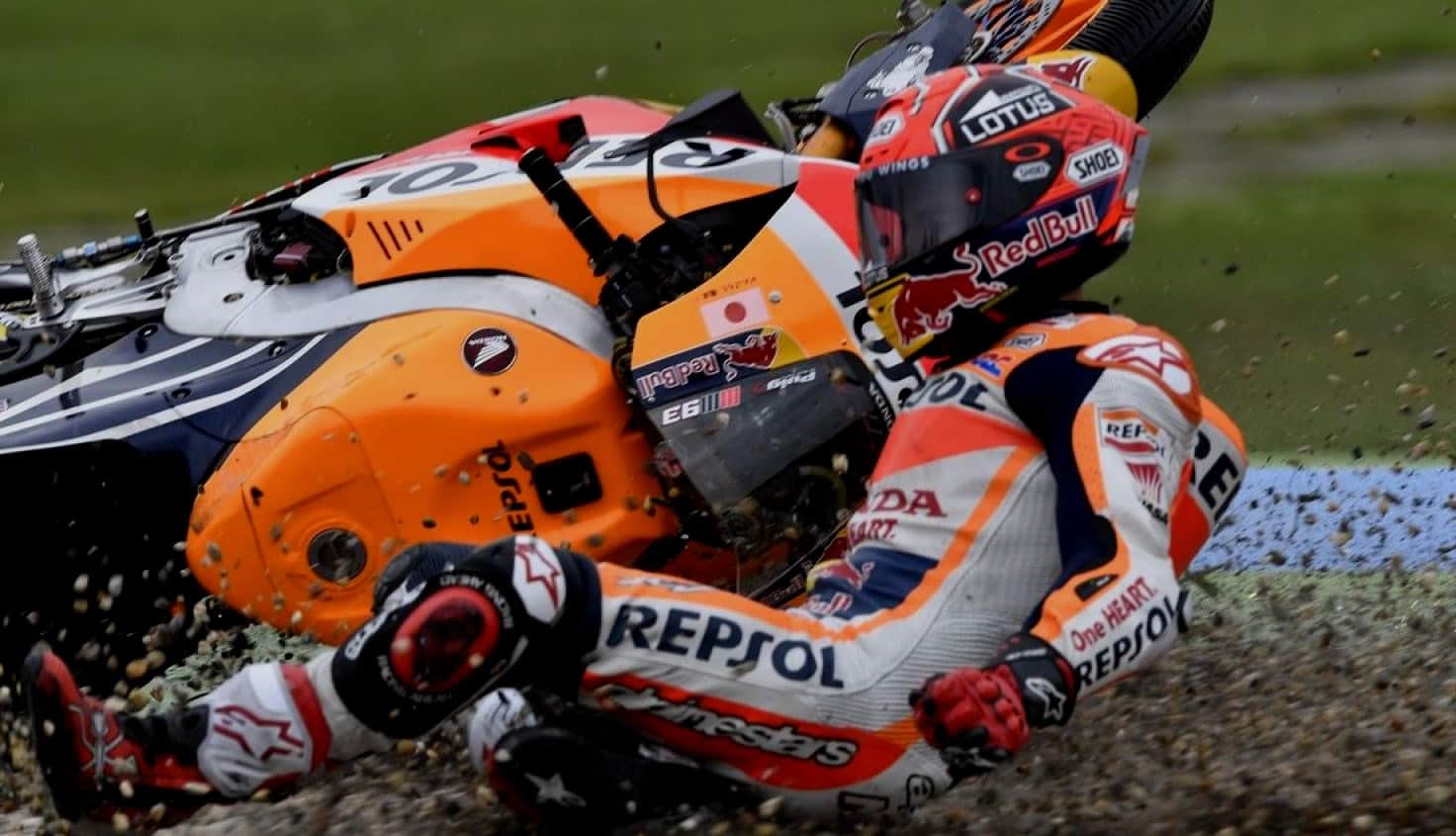 Moving on, Marc signed a two-year contract with Repsol Honda team in MotoGP as a replacement of Casey Stoner who was retiring.

He immediately moved to the team when an announcement was made that he had agreed to contract terms.

Backed with the full support of the team, Marc started the 2013 racing season on the right footing by winning the new Circuit of the Americas in Texas.

With the victory, Marc became the youngest person to ever win a MotoGP race. The rest, as they say, is history.

Marc Marquez is yet to be married at the time of writing. We bring you facts about his dating history and current relationship status.

To start with, Marc is not known to have dated any woman before he met his girlfriend Lucia Riveranl.

Although little is known about where the lovebirds first met, they are romantically invested in each other and their relationship is no secret.

Meanwhile, none of the duo has son(s) or daughter(s) out of wedlock at the time of writing.

Marc Marquez comes from a middle-class family background. We bring you facts about his family life.

Julia Marquez is Marc’s father. He worked in construction during Marc’s early life and also served as a volunteer for a Moto club, where he helped organize weekend motocross competitions.

Julia was instrumental in stimulating Marc’s interest in motorcycle racing as he often took the then-infant along to racing games.

The supportive dad has over the years, followed Marc around the world, witnessing his crashes and wins.

Roser Alenta is Marc’s mother. She worked as a secretary during Marc’s early life and also helped prepared sandwiches for members of the Moto Club where she and Marc’s father volunteered.

Being the custodian of the family’s struggles, Roser is not quick to forget the sacrifices that were made to help Marc’s career.

She once recalled that the family had to stop dining out in order to buy racing boots for Marc, adding that they often attached strips of leather to his racing suits whenever he outgrew them.

Marc has no sisters but a younger brother, Alex, whom he shares the same childhood story with. The siblings grew up with shared interests in motorcycle racing and are now professionals in the sport.

Though Alex has not many professional wins like Marc, he has fared considerably well that he is alongside Marc regarded as motorcycling’s world-champion siblings.

Away from Marc’s immediate family, he has an uncle Ramona Marquez who is also a motorcycle racing enthusiast.

Other than Ramon, little is known about the rest of Marc’s extended family including his paternal grandparents as well as his maternal grandfather and grandmother.

The same goes across the board for Marc’s aunts, nieces and nephews while his cousins have not been identified in notable events of his childhood time to date.

Personal Life away from MotoGP:

What makes Marc Marquez tick?. Sit back as we bring you makings of his personality to help you get a complete picture of him. To begin with, Marc’s persona is a blend of Aquarius Zodiac traits.

He is action-focused, quirky, unique and moderately shares information about his personal and private life. His hobbies include frequenting neighbourhood bars with friends, playing video games and riding bicycles.

Marc Marquez has an estimated net worth of over $35 million dollars at the time of writing.

The major origin of his wealth stems from his racing engagements and endorsement deals while analysis of his spending patterns reveals that he lives a conservative lifestyle.

Thus, Marc would rather draw attention to his racing career than to evidence of his wealth.

As a result, the museum which holds his important silverware and bikes is more popular than his house located in the same town (Cervera). Notwithstanding, he does have exotic cars that include a BMW M4 CS.

To wrap up our Marc Marquez biography, here are untold or lesser known facts that are rarely included in his bio.

FACT CHECK: Thanks for reading our Marc Marquez Childhood Story, plus untold biography facts. At childhood biography, we strive for accuracy and fairness while delivering you the Biography of MotoGP Riders.