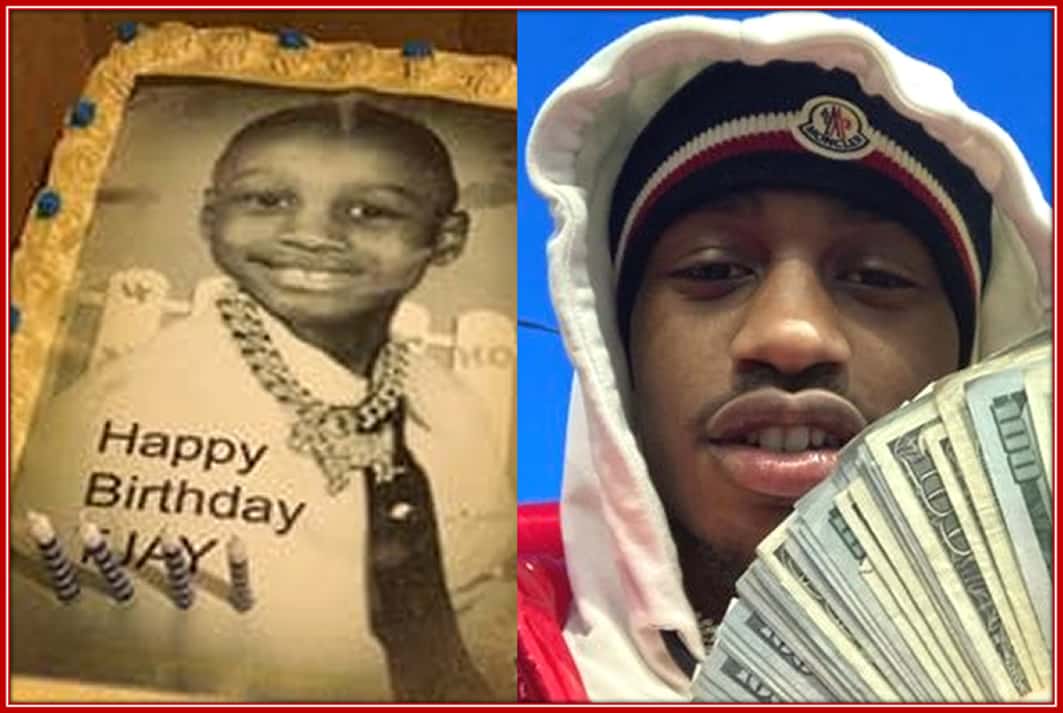 Simply put, Childhood Biography presents you with the rapper’s memoir, from his early days, to when he became famous. To whet your autobiography appetite, here is his childhood to adult gallery — a perfect summary of Lil Tjay Bio.

Just like ASAP Rocky and DaBaby, everyone knows him for his ecstatic raps in the Hip hop trap drill genres.

However, most of his fans have little idea about Lil Tjay’s Life Story, which is quite interesting. Without much delay, let’s satisfy your curiosity with his intriguing Biography.

For Biography starters, his actual name from birth is Tione Jayden Merritt. However, his fans address him by the nickname — Lil Tjay.

He was born on the 30th day of April 2001 to his father and mother in the Bronx, New York, U.S. Lil Tjay is the eldest of three children born of the union between his parents.

The childhood days of the upcoming rapper recorded several episodes of childish pranks and stubbornness.

Tjay testified that he was quite the problematic child amongst his siblings. His character was too notorious for his mother to handle.

Sadly, Tjay was raised single-handedly by his mom and had no father figure throughout his childhood.

Growing up with his siblings, the rapper who masterminded terror often succumbs to the pacifying power of music. He also found solace in roaming the streets with his bicycle.

Apparently, he got into fights with other kids and got himself into petty robberies. Despite all these downsides, Tjay usually set aside some time to listen to Drake and Meek Mill.

He loves to sing the songs of famous musicians that his community dubbed him as Justin Bieber of the Bronx.

Because his household lived in a roomy apartment means that he comes from a poor home. However, Tjay’s mother did her best to foot their bills, even though she received no financial support from his father.

Coming from a poor family background did not restrict the upcoming artiste from dreaming big. His family’s financial state did not intimidate his unwavering ambition to become a public figure.

Apparently, his complexion depicts that the songwriter has a multiracial ethnicity. Moreso, many African countries are warming up to welcome him as one of their own. Rumors have it that Tjay’s original Family root is traced to Ghana.

Moving on to his birthplace, the music prodigy hails from The Bronx borough of New York. Do you know?… His hometown contains the poorest congressional district in the U.S.

Seeing that her firstborn son showed a lot of potential in singing, Tjay’s mother had him enrolled at the Bronx Dance Academy.

She hoped that his days at the dancing school would help him achieve success in the entertainment world.

While Tjay worked so hard to improve his performing skills, he could hardly get a hold of his temper.

Hence, he often got into fights with other kids in the academy. This became a limiting factor to his rapid improvement.

In 2016, the young rapper masterminded an unsuccessful robbery which led to his arrest. Because he was still a minor, the 15-year-old was sent to a youth detention centre.

Spending one year in detainment influenced his life for good. It was at the detention centre that Tjay began writing different raps.

Even though he did not know what the future holds, he was prepared to turn a new leaf and succeed genuinely through music.

After his release in 2017, the songwriter began uploading his music on SoundCloud. Surprisingly, one of his songs — Resume — received lots of positive responses and began trending more than he had expected.

His performance at the competition attracted many record labels (most notably A&R). A feat that motivated him to work harder on his singing prowess.

As expected, the singer did not relent in producing more songs. Moreso, he uploaded several other tracks on SoundCloud, which received millions of streams.

Fast forward to the time of writing this Biography, the entertainer is now making waves in concerts alongside his friend Lil Uzi Vert.

Some of his albums even earned him many notable awards. The rest, as they say, is history.

Who is Lil Tjay Girlfriend/Wife To Be?

The young entertainer has been involved in a melodramatic relationship since his rise to fame. At first, Lala Baptiste (an influencer) allegedly set up a date between Tjay and her best friend — Rubi Rose.

Interestingly, the iconic singer flew Rubi to Atlanta, where the love birds celebrated his birthdate together.

However, their date ended on a sad note as Tjay refused to pay for Rubi’s flight home. This humiliating experience marked the end of their relationship.

After the entire ordeal, Tjay hooked up with Lala Baptiste, who became his new girlfriend.

Do you know?… Lala is a social media star and an influencer who has a million followers on Instagram and 360,000 subscribers on her YouTube Channel.

You probably got to know the rapper after watching or listening to some of his songs. Having seen him from the entertainment perspective, you might be tempted to ask; Who is the rapper who wants to be the next Usher?

To begin with, his persona is a blend of the Taurus Zodiac traits. Yes, Tjay portrays a realistic but stubborn personality. He does not tolerate any form of disloyalty from friends and foes alike.

Whenever he is less busy, the singer often plays basketball. Of course, he is good at it, as you can see in the video below.

With his famous tracks (Resume, Brothers, and Leaked) receiving about 44.4 million plays on SoundCloud (as of 2021), Tjay has made tonnes of dollars from them.

At the time of compiling this Bio, the entertainer has amassed an estimated Net Worth of $600,000.

Interestingly, he shares some common attributes with DaBaby when it comes to obtaining ostentatious assets.

Yes, he lives a luxurious lifestyle that is noticeable by many exotic cars and expensive houses. Below is a picture showing some of his assets.

The road to success was never easy for the songwriter. Thankfully, he had his family stand firmly by his side when all hopes seemed to be lost. In this section, we will reveal interesting facts about Tjay’s father, mother, and siblings.

Since his childhood days, Tjay did not enjoy any form of paternal comfort. Apparently, his father was not in the picture of his Life Story. Hence, Fans are curious to know what led to his dad’s absence from his family.

Some people believed that Tjay’s parents got divorced when he was still a little kid. Having no father figure truly hurt the young songwriter in many aspects of his life. We await when Tjay would comfortably disclose more facts about his dad.

The only parent figure he ever had is his mom. She is his citadel of comfort whenever he finds himself in any kind of mess.

Raising her three children single-handedly was never a simple task for Tjay’s mother. However, she ensured her kids went to school and provided them with all the necessities of life.

One of the special gifts he had during his childhood days is the existence of his siblings. Apparently, they are the reason he never had to feel all alone while growing up.

Although their names are not mentioned in his Biography, we know that Tjay has two younger siblings.

Moving on to his ancestry, there has been no information about his paternal grandparents as well as his maternal grandfather and grandmother. Similarly, nothing has been said about his uncles, aunts and other family relatives.

To wrap up the iconic artist’s Bio, here are a few facts about him that would help you get a complete knowledge of his Life Story.

It is quite intriguing how some artists coin their stage name from some attributes in their actual name.

Of course, Tjay adopted his nickname from the 1st letter of his first name (Tione) and the first three letters of his middle name (Jayden).

The veteran artist is not an extremist when it comes to inking. Hence, he has only tattooed a rose flower and the inscription “Maive“on his right forearm. According to Tjay, his tattoos were inked in honor of one of his family member.

Interestingly, Tjay has not gone rogue on religious matters. Of course, he is a Christian who is conscious of the code of conduct of his faith. Notwithstanding, Tjay has not allowed his religious life to restrict any of his musical endeavours.

In January 2021, Lil Tjay was busted for alleged weed and gun possession in NYC.

According to PAGESIX, the Police found a backpack filled with marijuana behind the front passenger seat in a black SUV which contained Tjay and four others.

Thankfully, the case ended without the arrest of the American songwriter.

Before we round up his Biography, take a quick tour of the summary of his Life Story in the wiki table below.

Indeed, Tjay’s self-discovery during one of the most terrible challenges of his life helped him kick start a successful career. Perhaps he got to think about what he could probably do with his talent while serving his time in detention.

It behooves us to appreciate his mother and siblings, who gave him unmerited supports when it mattered the most to him. We wish his father was there for him at every face of his growth.

Asides from Lil Tjay’s Biography, we’ve got other Singers’ childhood stories for your reading pleasure. The Life History of Celine Dion, R Kelly, and Dido will fascinate you.

Thanks for reading our Lil Tjay Childhood Story Plus Untold Biography Facts. Kindly contact us if you see any inappropriate information in our write-up.