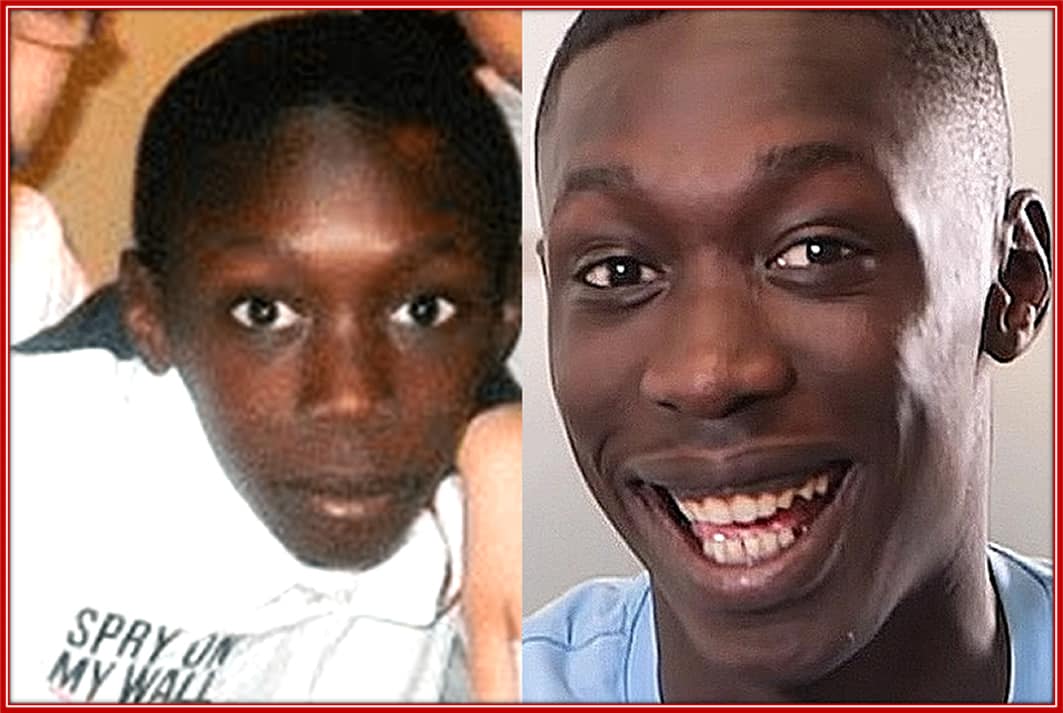 In reality, this chronicle serves you an expansive view of the Life history of Khabane Lame, popularly known as Khaby Lame. Our record begins after his birth in Ziguinchor, Senegal, until his fame.

Stirring up your desire for our bio, here are pictures of Khaby Lame. Of a truth, the snapshot summarises his Childhood Story and Biography facts from cradle until he went global.

Khaby Lame is known for his TikTok videos in which he silently mocks overly complicated life hack videos. Notwithstanding the accolades, there is more to him than meets the eye.

Therefore, relax while you have the fascinating read of a concise piece of Khaby Lame Biography and Childhood Story. Without further delay, let us proceed.

The Senegalese-born TikToker/Instagram Influencer came into the world from the union of his father and mother. It is not sure if he has siblings or the number of his siblings.

Ever since Khabane was a young child, acting excited him. His boyhood was extraordinary, amidst lots of attention and love shown by his parents.

When Khaby Lame was just one, his parents (Mr. and Mrs. Lame) moved to a public housing complex in Chivasso, Italy, for a better life.

As such, the talented TikToker/Instagram Influencer got raised in Italy. He took to various social media sites for pleasure. In addition, he dreamed of being a fashion icon.

Even as much as there is no information about his parents. He had little money growing up, and Khaby got raised in a public housing. However, he has never shown embarrassment of where how he started.

During a conversation, Khaby said, “A public residence is a place to which I owe all. They taught me education and then let me develop many bonds.” As such, we could say, Khaby lame belongs to a middle-class family.

As aforementioned, Khabane Lame is Senegal-born. He was born in Ziguinchor. However, he moved to a public housing complex in Chivasso, Italy, when he was one year old. He has lived in Italy almost all his life. So, we could say that the social media celebrity is Italian.

Although he has settled in Italy since he was a kid, he still does not own an Italian passport or citizenship, only Senegalese citizenship. He has stated, “Sincerely, I don’t require a piece of paper to define me as Italian. ”

Khaby lame is bilingual. He speaks English and Italian, and he seems to be fluent in both. As such, we deduce Khaby lame is a Senegalese-Italian. Following is a pictorial representation of his family origin.

Khaby lame also took part in the junior-level basketball championships while in school.

Lame functioned as a CNC machine operator at a factory near Turin, before becoming laid off in March 2020. After getting laid off, Khaby Lame started his career as a gaming video creator. Then, he began posting on TikTok.

His early videos showed him dancing and watching video games, and were primarily filmed in Italian and included Italian subtitles. He mainly uploads videos in which he mentions people who complicate simple tasks for no reason.

Lame started posting on TikTok during the COVID-19 pandemic after getting laid off. His previous videos showed him dancing and watching video games primarily filmed in Italian and included Italian subtitles.

He rose to popularity with his video responses as TikTok’s “duet” and “stitch” features to videos illustrating overly complicated “life hacks,” in which he performs the same task, but simply says nothing.

Along with TikTok, Khaby is also very popular for his Instagram account and has amassed a decent fan following on his account. In 2020, he also worked as a model for the popular magazine DluiRepubblica.

In April 2021, he topped Gianluca Vacchi as the most-followed Italian TikToker, and, in July 2021, he beat Addison Rae to become the second most-followed TikToker.

In August 2021, Lame appeared as a co-star for Juventus F.C.’s announcement of Manuel Locatelli. Here is a video of some of his funny skits in 2021.

By January 2022, Khaby signed a multi-year partnership with BOSS and got featured in the #BeYourOwnBoss campaign.

So far, there is no record that Khaby Lame is married. He has no wife, and however, he has had a few relationships. Besides, his celebrity status and charming personality cannot exempt him from advances from many suitable partners.

Khaby Lame is in an affair with Zaira Nucci. Although there are no plans for marriage yet, the duo are engaged. Khaby declared his engagement to Zaira Nucci in 2020.

The couple met via social media. In October 2020, Lame responded to one of her story on Instagram, and that was how the love story began. They then began talking for a while and stopped writing to each other.

Moreso, he later asked her out on a date. Khaby Lame and Zaira Nucci went to a McDonald’s. According to Khaby, “The first time was beautiful and simple at the same time.”

Zaira Nucci is a young girl from Sciacca, a metropolis on the southwestern coast of Sicily, southern Italy. She was born in 2003 in Italy. Zaira Nucci belongs to mixed ethnicity. She holds Italian citizenship. Moreover, her zodiac sign is Aries.

Financially, Zaira Nucci has quite stable earnings from her professional career as a social media superstar. According to Wikipedia, as of 2021, Zaira Nucci’s estimated net worth is $50,000.

Nevertheless, as a social media star, Zaira Nucci might earn a portion of its income from advertisements and promotion. The future seems bright for Zaira. Her talents and personality keep our growing number of fans wanting more.

At this time in our biography, let’s report about each member of Khaby Lame’s home. Indeed, he could not have made it this big without the support of family members.

As stated earlier, Khaby Lame has successfully kept his life secret, despite his popularity on social media. As such, we know so little concerning his father. However, it is evident that he fully supports his son. Khaby worked hard enough to give him the best of life.

Khady Lame’s mother appears to be in concrete support of her son’s dream and career. Also a Senegalese, she tied the knot to Khaby’s dad in Senegal before their move to Italy.

Khaby Lame may have siblings, but then we know nothing about them. The viral TikTok celebrity is very discreet about his family.

But then the photo here shows a perfect resemblance of Khaby Lame’s brother. Again, his name is not yet known.

The Senegalese celebrity Tiktoker should have other relatives. Of course, Khaby Lame should have a few extended family members. No child appears out of the blues.

So, aside from his father and mother, Khaby Lame should have Grandparents, aunts, or uncles, among others. Nonetheless, we have no clue about any of them.

Lame is a youthful, good-looking, smart and handsome man. He has a charming and dashing personality. Khaby Lame owns a strong and attractive physique with an athlete’s muscular body type and white teeth.

His short and stylish black hair and black eyes make him stand out. Moreover, he is so keen on his physique and follows a regular and healthy diet to keep himself fit as a fiddle. Khaby Lame loves to play basketball and football.

He is a massive fan of the professional NBA basketball player Lebron James. Khaby Lame оftеn ѕhаrеѕ his videos and рhоtоѕ wіth hіѕ many followers via his social media handles, especially TikTok and Instagram.

His TikTok account alone crosses 100 Million followers. In addition, his Instagram has over 70 million followers without Saying A Single word In any of his videos.

Lame has pretty good earnings from his professional occupation as a TikTok star. He is among the wealthiest TikTok influencers of 2021, the likes of Charli D’Amelio and her sister, Dixie, Addison Rae, Bella Poarch and Spencer Polanco. His income affords him luxury.

The purchase of choice cars and residential are easily obtainable. However, at this stage of life, Khaby has not much focus on luxury. Besides, he has prospects to earn more in the future. The social media star has moved from Chivasso, Italy, to Milan.

With over 132 million followers on his TikTok account, advertisers pay a certain amount for each post made. Looking at Khaby’s latest post in 2022, the average engagement rate of followers on each of his posts is 0.10%.

The Italian-based content creator lost his factory job during the Pandemic and is now a highly paid social media superstar. What’s more? Below are a few impressive other facts about the Senegalese-born Social media personality.

Khaby has developed an entire platform around being funny, but he seems to be serious about his fashion game. He has an informal sense of style, but it’s clear that he enjoys putting outfits together. Khaby also seems to love high-end brands such as Gucci.

Just like most Senegalese, Khaby Lame is Muslim. Most of the Senegalese population has Sunni Islam based on the Ash’arite deity and the Malikite philosophy. Notwithstanding, Senegal remains a secular State.

Before getting recognition, he has also worked as a CNC machine operator. Despite that, the Job paid little, he later lost the Job because of the 2020 Corona Virus pandemic.

Notwithstanding financial issues at the initial stage of his career, there sprang up other innovative ideas.

So far, we know that Khaby Lame is a viral TikTok celebrity who has been posting videos that show his imagination, humour, and personality. Conversely, for a quick flip through Khaby Lame Biography and Childhood Story, wе hаvе аll уоu nееd tо knоw аbоut him.

His Networth, Age, Height, Weight, Girlfriend, Parents, Siblings, Relatives, Rise to fame, Networth, and much more are on the table.

As we round off Khaby Lame’s Biography and Childhood Life Story, I guess you could pick up a few lessons. You must have noted how Lame worked as a CNC machine operator at a factory near Turin.

After which, he got laid off in March 2020 because of the COVID-19 Pandemic. Though it all started as a joke, he remained committed to his work. Being steadfast may lead you to the door of success.

But then, hard work is the key to achieving it; Khaby Lame has very well proved this line. Though it all started as a joke. Today, we popularly know him for making short comedy skits, pointing out people who complicate simple tasks.

Khabane Lame is one of the most famous TikToker in the world. A report has it that Charli D’Amelio is About to Lose Spot as Top TikTok Star to Khaby Lame.

We hope you had a fascinating reading throughout our Bio. Subscribe for more of our stories. The accuracy and top-notch quality are our signatures. However, contact us (via comment) if you see something that isn’t right.

Asides from Khaby Lame’s Bio, we’ve got other Interesting Internet Celebrities Stories. That of Linda Ikeji, Bobrisky and KSI will interest you.