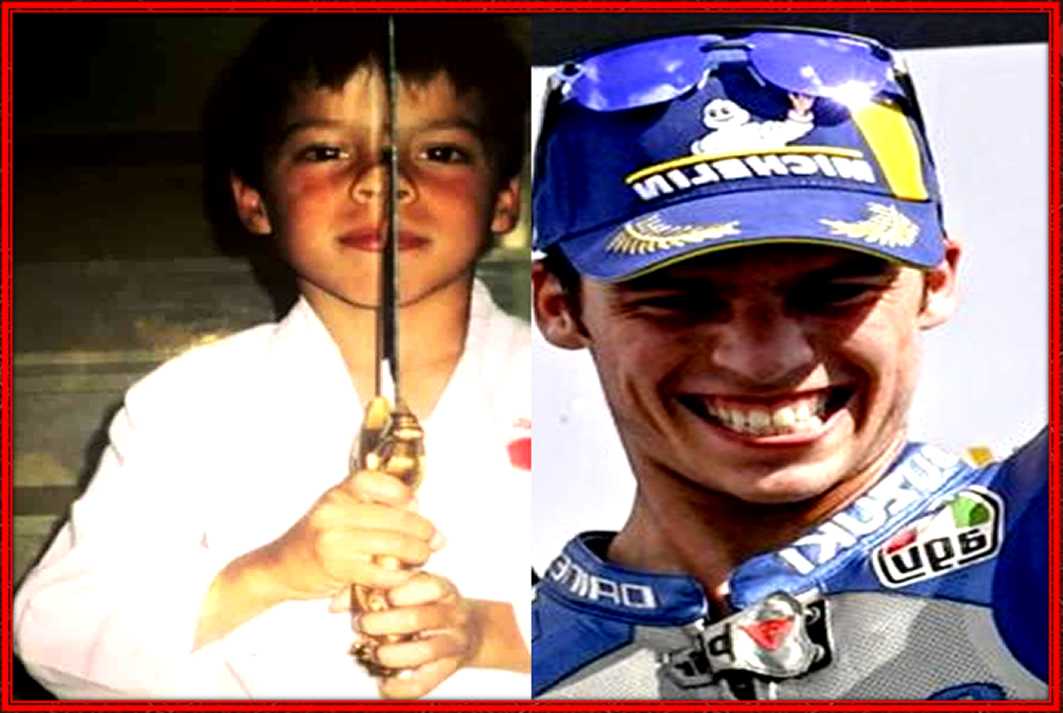 Our Joan Mir Biography portrays Facts about his Childhood story, Early Life, Parents, Family, Girlfriend/Wife to be, Personal Life, Lifestyle, and net worth.

We present a detailed analysis of memorable events surrounding his youthful days, right until he became famous. Behold, his early life and rise gallery, a perfect summary of Joan Mir’s Bio.

Just like Enea Bastianini, he is exceptionally known for his athletic versatility, he is a fast-rising Spanish Grand Prix motorcycle racer.

In case you didn’t know, Joan Mir is the 2020 MotoGP world champion. We realize only a few know his life story, which we have prepared. Without further ado, let us begin.

For starters, his full names are Joan Mir Mayrata. He was born on the 1st day of September 1997 to his mother, Ana Mayrata, and father, Joan Mir Snr in Palma de Mallorca, Spain.

As a child, Joan Mir saw motorcycle riding as his passion and culture. His father owned a Skate shop in Mallorca and he also grew up loving being surrounded by lots of skateboard decks.

Even as a boy, young Joan Mir had his first motorcycle from a polini. At the age of six, he got a Honda QR and was passionate about riding anything having wheels.

Skates, skateboards, and scooters were also part of his childhood. From the non-sporting side, jumping on the ramps in his family garden was a norm.

Watching his Uncle, Joan Perello, take part in the world championship with the Stop and Go team was his inspiration to join the motorcycle competition. Much later, that inspiration would lead him to Stardom. Finally, as a boy, he was an ardent admirer of his countryman, Rafael Nadal.

Having a Dad who owned a Skate shop and his mother, Ana Mayrata being a fashion stylist doesn’t tell a rags-to-riches story.

The love for sports revolves around the talented athlete’s household. Joan Mir took his first steps in Motorcycling with his Father, who later became his sponsor.

Even though it may sound unusual, his father didn’t have enthusiasm for bikes.

The name Joan is a Spanish (Catalan/Valencian) masculine name. However, Joan Mir’s father and mother don’t have their family roots from the Spanish mainland.

The young professional Motorcycle racer has his family origin from Palma de Mallorca, an autonomous community of the Balearic Islands in Spain.

Interestingly, formal education wasn’t a priority. Even though it was mandatory to go to school, Motorcycling took most of Mir’s attention.

During Joan’s academic years, he went to Jorge’s fathers’ school, Chicho Competicion. It was there that he learned the skill of riding motorcycles.

In 2009, Joan entered the Balearic Federation’s Motorcycle School where he continued to learn under the tutelage of Dani Vadillo, and other instructors. Valentino Rossi was among his idols. Ironically, he later shared the track with him.

The son of Ana Mayrata begun his career at a young age. At 10, he had played competitive Motorcycling.

Mir competed for two (2) seasons in the Red Bull MotoGP Rookies Cup in 2013 and 2014. He finished with three wins and six podiums as runner-up to Jorge Martín in 2014.

Mir then contested the CEV Moto3 Junior World Championship in 2015. He won four of the first six races, but faded towards the end of the season, and ultimately finished fourth in the championship.

The year 2016 was his debut in the World Championship. Joan continued to fulfil his dreams and had to continue training hard.

That year, besides getting his first podiums as a world championship racer, he finished 5th overall, despite having several falls that made him learn a lot.

Also, that year he was the best rookie in the category. He started 2017 very strong and motivated.

The year 2017 was splendid, having got the Moto 3 World Champion with ten victories and 13 podiums. He almost beat Rossi’s record.

In 2017, Joan moved to Moto 2, with much desire and with the possibility of only being there for one year.

The season in Moto 2 went well with a few podiums, but not as much he would have loved to win races and the championship.

In MotoGP, things happen quickly, and one has to get focused. Knowing this, Mir pushed himself to overcome and improve his technique every day, by going to the track.

In his rookie season in 2019, Joan Mir achieved consistent top-10 finishes. He earned a season-best finish of 5th place in Australia.

The athlete finished the season with 92 points, 12th in the overall standings and second-best rookie behind former Moto3 Leopard Racing teammate.

Much later, Mir became the first Suzuki rider to win the 2020 MotoGP riders’ championship since Kenny Roberts Jr. in 2000. This feat makes him faster to MotoGP than Marquez and Rossi.

Who is Joan Mir’s Wife?

For a young chap, the palmor-born is currently single. There has been little information about his past relationship and any previous engagement.

So, according to our database, he has no children. However, he seems to be dating a young Model, Alejandra López Garro as seen on his Instagram handle.

Much we can’t say about the Spanish Motorcycle rider without the input of his household. As he started competing on motorcycles, following his Father’s cousin Joan Perelló.

Not to mention the moral support he also got from his Mum and Dad, who were also lovers of Sports. Let’s look at a few of his family members below.

As mentioned earlier, the talented athlete Dad is also Joan Mir. He was a shop owner who specialized in skates in the centre of Palma de Mallorca in Spain.

Even though he was not enthusiastic about Motorcycle Racing, he fully supported the dreams of his son. He sponsored Joan Mir’s passion and is married to Ana Mayrata.

His mother Ana Mayrata is a fashion stylist and personal shopper (Ana May) who has worked, among other clients, for the Rafa Nadal Academy in shootings.

Ana Mayrata, Joan Mir’s mother, a stylist in shooting for the Rafa Nadal Academy in 2018.

Even though we are yet to know how many siblings he has, an Instagram photo of his sister is found. Her name is Elgas Mir.

He has also found brotherhood in his Father’s cousins and tutors. His relationship with them has been passionate and remains keen on maintaining a healthy relationship.

Foremost to get mentioned here is Mir’s Uncle and mentor, Joan Perello. He was also a Motorcycle Racer.

He took part for years in the world championship with the Stop & Go team in Spain.

Taking a cue away from his career, what else do you think the Spanish athlete enjoys.? Aside from Motorcycle racing, Mir enjoys Ski, Skimo Cycling, and Sailing too. He loves Japanese food and has Gladiator as his favorite movie.

He also enjoys social media and uses the platform to connect to his fast-rising fans. While he has accumulated over 300,000 followers on his Instagram page and his Twitter account, has gathered over 375,000 Followers.

Lastly, he is someone who has learned the true meaning of perseverance before the victory. Joan Mir’s title-winning Valencia MotoGP race was deemed a “nightmare”, as he claimed he suffered a lot but can’t explain why he did.

We know the Spanish youngster to be calm, and a cool-headed personality shies away from publicity. Mir’s wealth, however, could afford him the choicest of cars and houses. He once purchased a 2018 Honda CR-V worth $28,290.

His net worth was growing significantly in 2018-19. So, how much is Joan Mir worth at 23 years old? Joan Mir’s income source is mostly from being a successful Racer.

According to sportekz, Joan Mir’s 2020 Basic salary got estimated at $1 million and a Net worth of $5 million according to celebsagewiki. He is one of the top-earning athletes of his age.

Besides the info stated above, below are a few facts that might catch your fancy.

Joan Mir wears the number 36 for his second cousin Joan Perelló. His cousin four (4) years older than him was also a 125cc World Cup winner between 2009 and 2011.

The Palma-born has the Moto3 and Moto2 Rookie of the Year titles. He missed the MotoGP by 100 points of difference with Fabio Quartararo, with whom a year later the MotoGP World title got played.

At a time, Suzuki MotoGP’s Joan Mir got confirmed with bruising of the lungs after his high-speed crash in Brno, Czech Republic. After which, he got forced to stay at home to recover.

In summary, we hope you had fun reading Joan Mir Biography and Childhood Story. We get to see the massive effect of identifying one’s dream early enough, also following through with diligence and determination right until the breakthrough.

As many would say, Joan Mir’s maturity takes the MotoGP World Championship by storm.

If you found this write-up heartwarming and enlightening, do well to share your experience with us in the comment section.