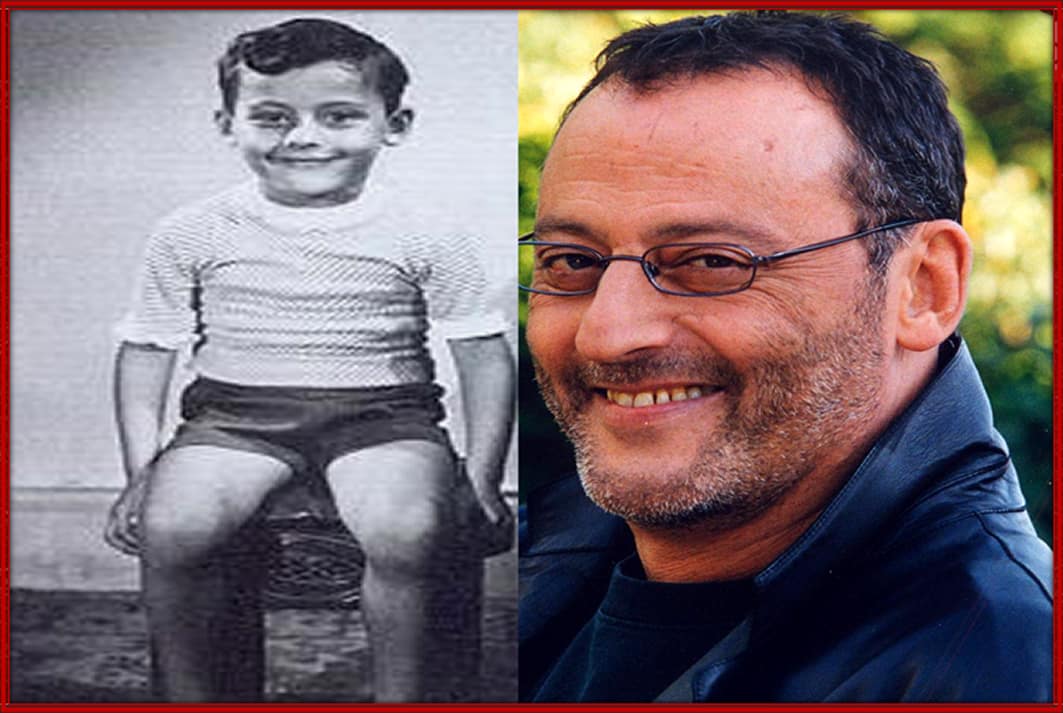 In a nutshell, this article presents you with Jean Reno’s History. We have a concise tale of his life journey, from his times as a kid until his fame.

Yes, you and I know it is hard to tell the best of Jean Reno movies, simply because he is just that good. If you have not heard about him, there is no need to fret.

He is a French Actor who has appeared in many successful Hollywood and European films. Without further ado, let’s begin.

For Biography starters, he bears the full names; Juan Moreno y Herrera–Jimenez. The French actor was born on the 30th Day of July 1948 to Spanish parents (from Andalucía) in Morocco’s largest city, Casablanca.

Jean is the eldest child of his family and he grew up with his only sister, María Teresa y Herrera-Jiménez. Even though born as Juan Moreno, he eventually changed his name to Jean Reno.

The Morocco-born actor had fond memories of his childhood in his birthplace. He spent his early days at the beach with friends, escaping the heat of the Moroccan day.

Regrettably, these early days got ruined when the Six-Day War hit his homeland. That was the year Jean Reno’s parents fled their home country for France.

It will fascinate you to know that Jean Reno proffered a French Twist to his Spanish name. There was a slight change from what his parents named him which is; Moreno y Herrera-Jiménez to Jean Reno.

The readjustment of the name was in other to win the heart of the movie industry in France.

Jean Reno’s parents are Spanish. They are natives of Sanlúcar de Barrameda and Jerez de la Frontera in Andalucia.

In the 1940s, his mum and dad had moved to Casablanca in Morocco, where Jean Reno was born.

At 17, Jean Reno had moved to France, where he nationalized and become a French Citizen. So, we could clearly say that he is a Moroccan-French actor with a Spanish descent.

For Jean Reno, growing up in a nuclear household of four members, two parents and two offspring; made catering much easier.

Back then, parents weren’t very wealthy. Jean Reno’s father was a linotypist. His work in a newspaper publishing company. Meanwhile, his mother also supported the family with her profession as a tailor.

Unfortunately, Jean Reno lost his mum while he was still a teenager. Devastating as it seems, the family did fight through their predicament.

The early discovery of one’s potential, like a stitch in time, saves nine. At 17, Jean moved to France, intending to align himself for a career in the movie industry. Jean Reno studied acting at the Cours Simon School of Drama.

As an intelligent student, he performed excellently in school and won the heart of his tutors. Jean Reno’s secondary education was at Lycée Lyautey in Casablanca, Morocco.

Immediately after the relocation to France, Jean Reno served in the French Army mandatorily for four (4) years to become a French Citizen.

However, as a young man, while studying, Reno tried to earn a living Juggling between jobs. He used to be an accountant, a driver, and even a customs officer.

Much later, after gaining theoretical Knowledge in acting, he debuted On the local TV and at the theatre. “The Hypothesis of the Stolen Painting” movie became Reno’s first full-length project.

Although a talented actor, Jean Reno’s theatre was not quite impressive. Until he came in contact with a young movie director, Luc Besson, who helped nurture his potential for maximum display.

After which the movie was titled, Subway announced him throughout the whole of France in 1985.

Soon enough, many new projects followed, including his role in the crime thriller “Nikita.” The project presented a lonely assassin image that was going to become his trademark for many further years.

To change his one-and-the-same-character image, Jean took part in diverse kinds of movies, such as historical comedy, western movies, melodramas, and even in romantic comedy films.

Other movies are even more successful, such as Godzilla, Ronin, and The Crimson Rivers. Though the Ronin movie is considered Reno’s best work of the last century.

At the time of putting up his Bio, Reno has not ceased in continuing to surprise his audience with even more varieties of movies since this 21st century. The rest, as we say, will be history.

Unlike Alpacino, he has tasted the world of marital union and like Tom Hanks, he has gotten more than one partner.

Before his fame, the French actor married for the first time to Geneviève. Both of them had a daughter, Sandra (born 1978), and a son, Mickael (born 1980).

Like her father, Jean Reno’s daughter Sandra is also an actress. Unfortunately, Reno’s extramarital affair ended the marriage with Geneviève, his first wife.

As a matter of fact, Jean Reno’s affair was with a Polish photo Model, Nathalie Dyszkiewicz, who later became his second wife.

On 29 July 2006, Reno married for the third time to a British model and actress of Polish descent, Zofia Borucka, at the Les Baux-de-Provence City hall.

The wedding ceremony graced the once presidential candidate Nicolas Sarkozy as his best man.

Later on, Zofia and Reno welcomed their first son, Cielo, born in July 2009 in New York City. Also, their second son Dean was born in September 2011.

It was not always a home-sweet home for Jean. His Dad seemed an authoritarian and had Jean Reno’s life planned outside acting to become a draughtsman.

While his mum, who was fragile, had her life shortened. She died Of Cancer at Reno’s teenage age. The family stuck together and later supported Jeans acting dreams.

Reno is crazy about his kids and so to spend more time with them, he shoots only two films yearly. However, it might seem not very pleasant to fans and film directors, it’s a joy for his wife and children.

Though a loving father, as it may. Jean’s Dad had his rare method of Expressing such affection. He was a linotypist by profession and did not support his acting career at first.

The superstar’s Dad wanted Jean Reno to be a draughtsman. He got married with two kids, Reno being the eldest.

Though much is unknown about his mum’s name. She was fully supportive of her family and made it her priority. Her two kids loved her so much.

She was a tailor by profession. But with her illness, she could not live long enough. She later died of Cancer.

The Moroccan-French personality had just a sibling and only sister, María Teresa Y Herrera-Jiménez. Jean Reno and his sister got raised Catholic. They both learned Spanish from their parents and Arabic and French while growing up in Morocco.

The talented actor’s family has kept a low profile; Especially from the media. Maybe for their instability and constant relocation. Although he should have relatives, yet we can point none out.

The French movie star is widely known for his comic sense and refined Attitude. He loves traveling and watching movies with favorite actors like Vincent Cassel and Carole Bouquet.

Reno also enjoys eating Thai food and has already decided where he will be buried – Baux-de-Provence – which is a small village so dear to his heart.

Reno is also a multilingual person and connects well with his fans on his social media handle. He Dislikes the American star system.

Having achieved loads since the onset of his acting career, Jean Reno can afford luxury properties and cars.

So far, he has driven a Cadillac SRX crossover and several models of Bentleys. Today, Reno maintains three homes in Paris, Malaysia, and Los Angeles.

Have you wondered how rich Jean Reno is, as of late 2016? According to Therichest sources, it estimates that Reno’s net worth is about $70 million, an amount earned through his successful acting career.

Having done justice to Jean Reno’s bio and life history, it is pertinent to state a few facts you didn’t know about the Moroccan-born movie star.

A Symbol of Sex:

Jean Reno got considered a sex symbol in France because he believes that women there have the feeling that he looks like a responsible man. This perception came from of the public face; his movies must have given him.

At 11 years old, it got discovered that Jean had Asthma, and the Doctor Prescribed fresh mountain air for him. The prescription cured later him of his Asthma, though he missed two years of his secondary education.

The famous Star also Launched a perfume called Jean Reno loves you in 2004.

He once received the National Order of Merit, France’s second-highest civilian honor, from then-president Jacques Chirac in 2003. He also got the François Truffaut Award (2012) and European Film Academy Achievement in World Cinema Award (2000).

Jean Reno has always proved his worth in movies, even if the film is bad or the plot gets lopsided.

Many young actors who follow in his footstep know the importance of being Jean Reno in their cinema quest. To Americans, he commands similar respect to Sylvester Stallone.

We hope that you enjoyed reading Jean Reno’s Childhood story. We saw how, despite the eminent circumstances of his mum’s death and subsequent relocation to France.

He stayed through to his dreams of becoming an Actor and maintaining his focus, fame, and relevance in the movie industry even until his old age.

It’s our earnest passion that you make it a date with us for more thrilling biography facts and life stories as they unfold.

The Life history of Chiwetel Ejiofor and Robert Downey Jr would interest you. However, could you have noticed any error in our delivery? Never hesitate to contact us.