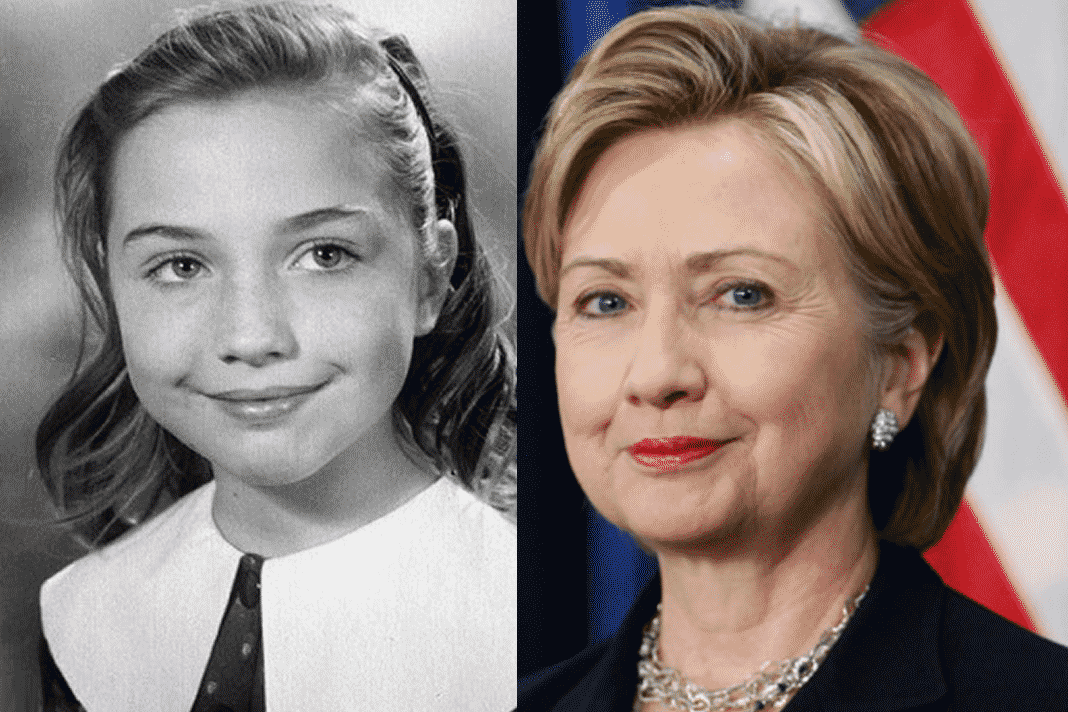 In the nutshell, this is a Life Story of an American politician, from her girlhood hood days to when he became famous.

Yes, everyone knows about her political career, but few consider his life outside politics, which is quite interesting. Now, without further ado, let us begin.

Hillary Diane Rodham Clinton was born on the 26th day of October 1947 in Edgewater Hospital, Chicago.

She was born as the eldest daughter of her mother, Dorothy Howell Rodham and father, Hugh Rodham (a prosperous fabric store owner).

Clinton was raised in Park Ridge, Illinois, a picturesque suburb located 15 miles northwest of downtown Chicago. Hillary grew up with her two younger brothers, Hugh Jr. (born in 1950) and Anthony (born in 1954).

Hillary attended Wellesley College, where she was active in student politics. They elected her senior class president before graduating in 1969, as pictured below.

After graduation, she then attended Yale Law School, where she met Bill Clinton. The rest, as they say, is now history.

About Hillary Clinton Husband and Children:

Hillary Rodham married Bill Clinton on October 11, 1975, at their home in Fayetteville. 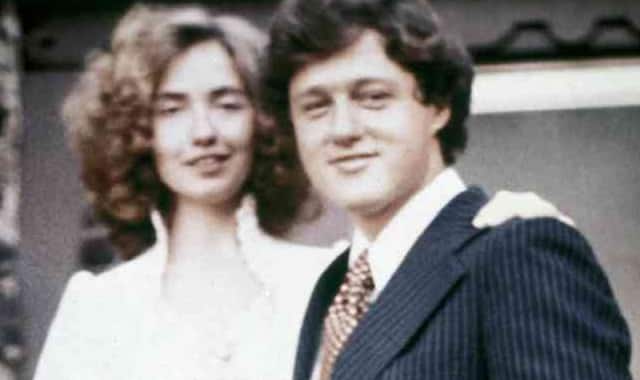 Before he proposed marriage, Clinton had secretly purchased a small house that she had remarked that she liked.

When he proposed marriage to her and she accepted, he revealed that they owned the house. Their daughter, Chelsea Victoria, was born on February 27, 1980. 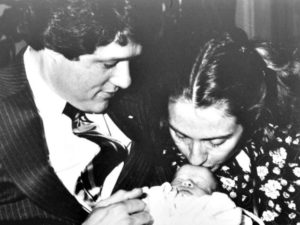 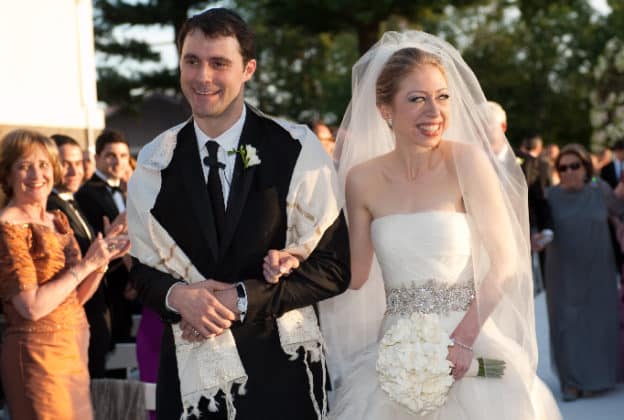 Hugh Ellsworth Rodham (April 2, 1911 – April 7, 1993) was an American businessman. He was born to an English father (a coal miner) and a Welsh mother. Huge Rodham was very fond of his children, as pictured below. 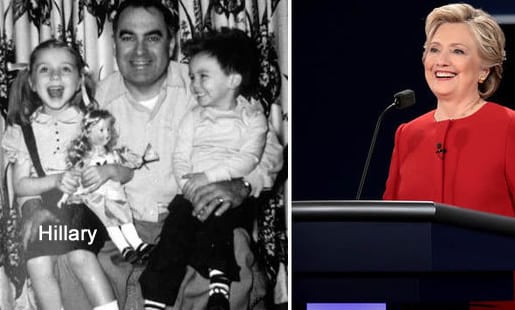 In World War II Rodham served in the United States Navy. After the war, he established a successful career in the textile supply industry.

Rodham entered politics as he once unsuccessfully ran for Chicago alderman as a Democratic-leaning independent in 1947. His daughter Hillary took it off from there. Huge died on April 7, 1993 (aged 82).

Mrs. Clinton’s mother, the former Dorothy Emma Howell, was born on June 4, 1919, into poverty and neglect. Below is a photo of Dorothy and her daughter, Hillary. 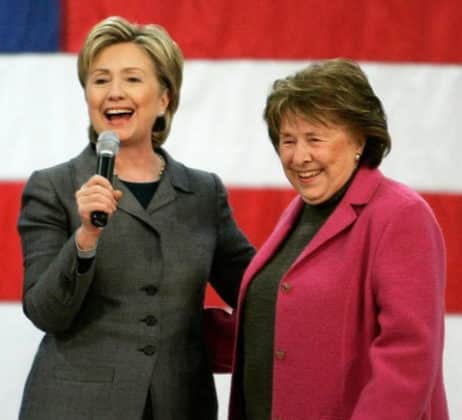 Dorothy’s parents fought violently in the house in Chicago that they shared with four other families.

Her father, a firefighter, was granted a divorce and custody of the two children after Dorothy’s mother never showed up in court to fight accusations of abandonment and abuse.

Dorothy and her little sister were sent on a cross-country train to live with their grandparents in California. Dorothy was 8, her sister was 3.

Their grandmother was old-fashioned and strict. She preferred black Victorian dress and tolerated no disobedience — Dorothy was not allowed to attend parties or have visitors.

After she went trick-or-treating one Halloween, she was confined to her bedroom for a year, let out only to go to school.

At 14, Dorothy escaped her grandmother’s strict domain for the unforgiving America of the Great Depression. She cooked, cleaned and nannied for a family in San Gabriel, Calif – in exchange for room, board and $3 a week. She lived in near abject poverty, but in that household, Dorothy learned what family was.

With her adopted family’s support and help from influential teachers, she eventually graduated from high school. She died on November 1st, 2011 (aged 92). 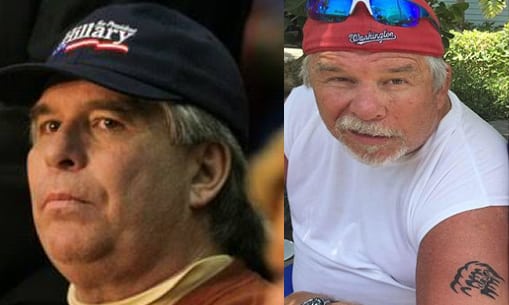 Hugh Rodham, another business executive pictured below, is the middle sibling. He is often called “Hughie”. 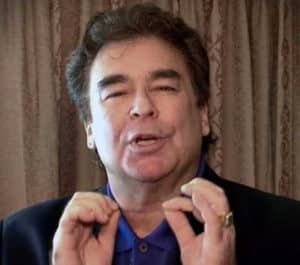 Hugh Rodham was once reported to have the habit of treating the White House with no respect. Hughie would show up in the worst outfits. … He would be wearing shorts with golf balls on them and a T-shirt.

He would sit in the Solarium, and it was reported that Hillary wouldn’t bat an eyelash as at the time she was on political appointment.

People would come all dressed up for dinner, and Hughie would waddle up in his shorts and fall asleep,” McCoy was quoted saying.

As usual, ChildhoodBiography says “Thank you”… for taking your time to read Hillary Clinton’s Biography. We care about accuracy and fairness in our continuous quest to deliver you Politician’s Life stories.

Please contact Us (via comment) if you notice anything that doesn’t look right in Hillary Clinton’s Bio. Don’t forget to stay tuned for more related articles from ChildhoodBiography. The Biography of Robert Mugabe, Peter Obi, and Angela Merkel would interest you.