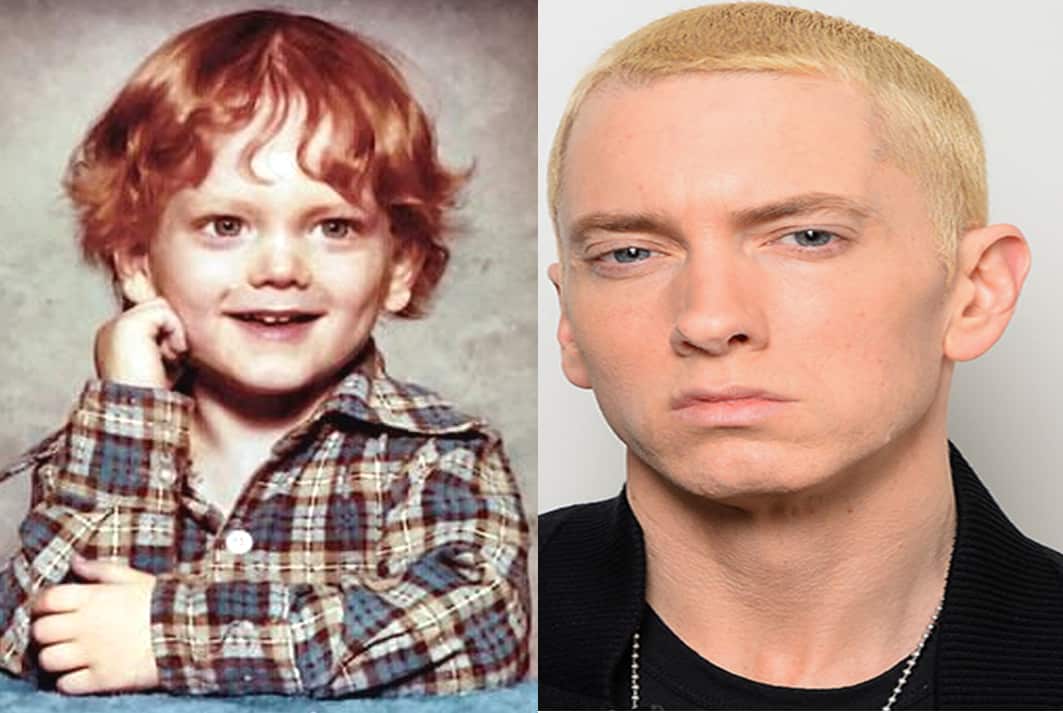 CB presents the Full Story of an American rapper with the nickname  “Slim Shady“. Our Eminem Childhood Story plus Untold Biography Facts brings you a full account of notable events from his childhood time to date. The analysis involves his early life, family background, life story before fame, rise to fame story, relationship life, personal life, family facts, lifestyle and other little-known facts about him.

Yes, everyone knows he is one of the greatest and most influential artists of all time. However, only a few consider Eminem’s biography which is quite interesting. Now, without further ado, let’s begin.

The American national of white ethnicity with English, German, Swiss and Scottish roots was still an infant when his father trod the path of runaway dads. As a result, Eminem was single-handedly raised by his mother in what could be best thought of as a nomadic lifestyle except that most nomads are herdsmen. Thus we say Eminem lived an itinerant lifestyle during his early life.

Itinerant indeed, the youngster and his mom wandered between Missouri and Michigan and never settled long enough at a particular place that young Eminem could call home. They eventually settled at a rough neighbourhood in Detroit where Eminem would spend significant years of his childhood.

Eminem has not a “Shady” (with apologies to the second word of his nickname)  education background but a complicated history of enrollment in numerous schools owing to the itinerant lifestyle of his childhood. As a result, he was often the new kid in the block kind of student, a development that saw him not just become a loner but vulnerable to bullying from older students.

Speak of bullying, there was practically no safe zone for Eminem at high school as he was often shoved into lockers, cornered in hallways and beaten up in the bathroom. Nonetheless, Eminem was generally considered as a smart kid who was bad at all subjects except English. He loved reading comics and discovered the power of words by constant study of a dictionary.

At the peak of his education in Lincoln High School Warren, Eminem began rapping with his high school friend Mike Ruby when he was aged 14. The duo would often skip class to participate in freestyle rap battles at a closeby school’s lunchroom.  They adopted the stage names “Manix” and “M&M”, of which the latter evolved to “Eminem”. Unable to cope any further with schooling, Eminem dropped out of high school as a 17-year-old and went on to accord more priority to rapping.

Faring well with life as a teenage dropout, Eminem worked hard to become relevant in rap music which was dominated by black people at the time. To achieve his desired goal Eminem put in a lot of work into songwriting specifically by practising how to write long words and phrases in a way that they all rhyme with each other.

While the rap prodigy was at it, he rapped with a group known as the “The New Jacks” and went on to form his own group – “Soul Intent” – with support from rapper Proof and other childhood friends. Before the groups’ disbandment in 1995, “Soul Intent” released a single on their 1995 self-titled EP featuring Eminem and Proof.

Moving on, Eminem made his first music video appearance in a song called, “Do-Da-Dippity” released in 1992. Years later, he teamed up with rapper Proof and four other rappers to form “The Dirty Dozen” (D12) in 1996.

Taking a step closer to fame, Eminem got signed to Jeff and Mark Bass’s FBT Productions and released his debut album titled “Infinite” in 1996. The album was not commercially successful owing to the fact that Eminem’s rapping style at the time lacked comically violent slant.

Suffice to say that the next year (1997) was a bad one for Eminem whose financial condition worsened. Poverty eventually forced the then-upcoming artiste to start living in his mother’s house, a development that saw him invent his anti-social alter-ego named “Slim Shady” as well as record his first extended play by the same name in 1997.

It wasn’t long before Eminem’s  ‘Slim Shady’ EP (Extended Play) reached Dr. Dre, the owner of ‘Aftermath Entertainment,’ and founding member of hip-hop group N.W.A. Dre Was impressed by Eminem’s talent and expressed willingness to work with him.

He worked with Eminem to help him release an album titled  ‘The Slim Shady LP,’ in 1999. The album which had hit singles like ‘My Name Is,’ ’97 Bonnie and Clyde,’ as well as ‘Guilty Conscience,’ catapulted Eminem to fame and became one of the year’s most popular albums. The rest, as they say, is history.

Eminem has been married twice as at the time of writing. We bring you facts about his dating history and current relationship status. To begin with, Eminem is not known to have had any girlfriends before he met his childhood sweetheart turned wife Kimberly “Kim” Anne Scott. The ex-lovebirds began dating in 1987 when Eminem was 15 and Kim was just 13.

So great was their relationship that Kim moved in with Eminem after she ran away from home. Kim became pregnant for Eminem years later in 1995 and gave birth to the rapper’s daughter Hailie Jade Mathers in 1995.

Kim and Eminem officially got married in 1999 and went on to have a turbulent relationship that was put to end with a divorce in 2001. Kim and Eminem were married again in January 2006 but got divorced in April that year. Away from Kim, Eminem was romantically attached to a number of female personalities during the course of his on and off relationship with ex-wife Kim. They include Karrine Stefan, Mariah Carey, Britanny Andrews and Joy McAvoy.

Regarding his current relationship status, Eminem is single and has no son(s) but the addition of two adopted daughters. They include his ex-wife’s niece, Alaina Marie Mathers as well as her (ex-wife) daughter from another relationship, Whitney Scott Mathers.

Eminem comes from a lower class family background. We bring you facts about his family life.

About Eminem’s Father: Marshall Bruce Mathers Jr is Eminem’s dad. He was born on the 30th day of June 1951 and began dating Eminem’s mother when she was 15 years old. Shortly after Eminem was born, Marshal reportedly left the family and thwarted any means made to contact him. After Eminem rose to fame his father – then working as a construction worker – wrote a public letter detailing how much he loved Eminem and accused his ex-wife (Eminem’s mother) of making people perceive him as a bad dad.

About Eminem’s Mother: Deborah Rae is Eminem’s mom. She was born on the 6th of January 1955 and gave birth to Eminem as a 17-year-old. Deborah never had an enduring rosy relationship with Eminem as made evident in some of the rappers offensive lyrics about the kind of relationship they had. Upon becoming famous, Deborah made unsuccessful attempts to be in Eminem’s good books. However, they started maintaining a cordial relationship after Eminem learnt she had cancer.

About Eminem’s Siblings: Eminem has a maternal half brother called Nathan Kane Samara. Nathan and Eminem grew up together at some point before the former was taken to a foster home owing to Deborah’s inability to take care of him. Eminem has a soft spot for his then-little brother, a close bond which persists in light of the happy childhood story formed by their companionship.

Asides Nathan, Eminem has two other half-siblings. They include his paternal half-sister  Sarah Mathers who discovered that she shares the same the bloodline with Eminem in 2005. The other is a little known paternal half-brother called Michael Mathers.

About Eminem’s Relatives: Away from Eminem’s immediate family his paternal grandfather was Marshall Bruce Mathers while his grandmother was Rae Waverly Drowns. Eminem’s maternal grandparents are Robert Ray Nelson and Betty Hixson respectively. However, there’s not much known about his uncles, aunts and cousins. Neither has he been identified with his nieces and nephews.

What makes Eminem tick?. Sit back as we bring you makings of his personality to help you get a complete picture of him. To begin with, Eminem’s persona is a blend of Libra Zodiac traits. He is inquisitive and very emotional.

In addition, Eminem is an idealist who has no problems with revealing notable events of his personal and private life. His hobbies include reading the dictionary, playing video games, listening to Music as well as spending time with friends and family. He also has interests in football and politics.

Eminem has an estimated net worth of $210 as at the time of writing. Though not a salary earner, analysis of the origin of his wealth and spending patterns portray him as one who lives a luxurious lifestyle by utilizing the money he makes from musical endeavours and endorsement deals.

His current residence at Clinton Township, Michigan is worth over $1,483,500. The mansion which happens to be one of Eminem’s numerous houses is an 8,900 square-foot home with deluxe rooms. Being a lover of cars the rapper owns nice collections that include a Porsche Carrera GT, an Audi R8 Spyder, as well as a Ferrari 599 GTO, and a Ferrari 430 Scuderia.

To wrap up our Eminem Childhood Biography here are some untold facts that are rarely included in his bio.

FACT CHECK: Thanks for reading our Eminem Childhood Story plus untold biography facts. At childhood biography, we strive for accuracy and fairness. If you see something that doesn’t look right in this article, please place your comment or contact us!