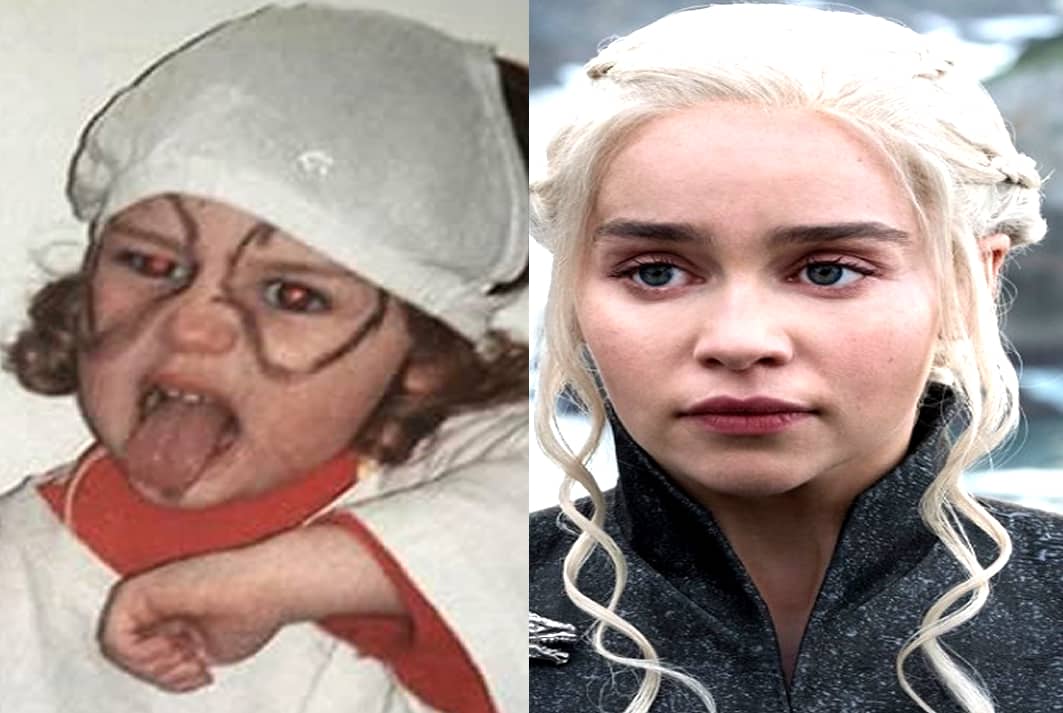 Childhood Biography presents the Full Story of an English actress with the nickname “Milly“.

Our version of Emilia Clarke’s Biography and Childhood Story brings you a full account of notable events from her childhood time to date.

Yes, everyone knows of her role as Daenerys Targaryen in the HBO hit series, Game of Thrones. However, not many fans have read Emilia Clarke’s biography, which is quite interesting. Now, without further ado, let’s begin.

For Biography starters, Emilia Isobel Euphemia Rose Clarke was born on the 23rd day of October 1986 at Westminster in London, England.

She was the second of two children born to her mother, Jennifer Susan Clarke (a businesswoman) and to her father, Peter Roderick Clarke (a theatre sound engineer).

The English national of white ethnicity with Indian, German and Welsh roots was raised in Oxfordshire where she grew up alongside her older brother called Bennett Clarke.

Just like Helena Bonham Carter, Emilia was raised in London. Growing up in Oxfordshire which is about an hour’s drive northwest of London, young Emilia had what could be best described as a serenely beautiful and happy childhood.

The house Emilia lived in at the time had a stream in the garden with open fields as surrounding environs.

Mushroom-picking was one of the activities she happily engaged in while her participation in Halloween celebrations constituted memories of her Idyllic early life.

Emilia had her primary or basic school education at Rye St Antony School in Oxford. The then-three-year old girl was a student at the school when her father took her to see the musical, “Show Boat.”

Although young Emilia was naturally a loud and antsy child, she watched the 2-hour show with rapt attention. When the curtain came down at the end of the performance, Emilia stood on her seat and clapped wildly over her head.

From then on, acting became Emilia’s focus and dominated activities that she engaged in at school and home.

More so, she was starred in several school productions during her secondary school education at St Edward’s School and went on to major in acting at Drama Centre London.

Unlike most celebrity actresses, Emilia has just a few early works in drama, film and television before providence ushered her to unimaginable and enviable heights yet to be attained by some of her early co-stars.

The early works include two stage plays at St. Edwards and ten plays at the Drama Centre London. She went on to clinch her first Tv role in an episode of the British soap opera “Doctors” before making her film debut in ‘Triassic Attack’ (2010).

2011 was the year Emilia was cast as Daenerys Targaryen in HBO’s fantasy series ‘Game of Thrones’. Emilia’s performance in the series did not only earn positive reviews but saw her win the 2011 EWwy Award for Best Supporting Actress in a Drama.

It suffices to note that the acting world became Emilia’s oyster as subsequent seasons of ‘Game of Thrones’ solidified her rise to prominence and opened doors for major roles in movies like ‘Terminator Genisys’ (2015), ‘Me Before You’ (2016), and ‘Solo: A Star Wars Story’ (2018). The rest, as they say, is history.

Emilia Clarke is yet to be married as at the time of writing. We bring you facts about her dating history and current relationship status.

The actress, who has been romantically linked to a few actors, was first known to be in a relationship with her first public boyfriend and comedian, Seth MacFarlane.

The ex-lovebirds dated for just a year before going separate ways in 2013.

The “breaker of chains” was subsequently rumoured to be romantically involved with actors; Cory Michael Smith; James Franco and Jai Courtney before she had a 7-month relationship with movie director, Charlie McDowell.

Regarding her current relationship status, Emilia is single at the time of writing and has no son(s) or daughter(s) out of wedlock.

Emilia Clarke comes from a middle-class family background. We bring you facts about her family life, beginning with her parents.

Peter Roderick Clarke was Emilia’s father. The caring dad who worked as a theatre sound engineer is credited for taking Emilia to see “Show Boat,” a musical which sparked her passion for acting.

Until his death on the 10th of July 2016, Peter had a good relationship with both Emilia and elder brother Bennet.

Asides from rendering them support in their different career path, Bennet always admonished his children to have bookshelves that are bigger than their televisions.

Jennifer Susan Clarke is Emilia’s mom. She is a supportive mother who rose out of secretarial school to forge a high-powered career in business.

Together with her late husband Peter, Jennifer helped expand Emilia’s range of thinking by instilling the mentality that the actress could be anything she aspired to be.

The proud mother of two shares a close bond with her kids who regard her as the perfect model of mothers.

Emilia has no sister(s) but an older brother called Bennett Clarke.

Emilia and Bernette grew up together in Oxfordshire and have never been too far from each other. Though not an actor, Bennet works as a cameraman and was a camera assistant on the HBO series “Game of Thrones.”

Away from Emilia Clarke’s immediate family, members of her extended family include her maternal grandparents Raymond Dodd and Euphemia Ann while little is known about her paternal grandfather and grandmother.

Similarly, there’s not much known about Emilia’s uncles, aunts, nephews and nieces. Neither have Emilia’s cousins been identified in notable events of her childhood story till date.

What makes Emilia Clarke tick?. Sit back as we bring you facts about Emilia’s personality to help you get a complete picture of her.

To begin with, Emilia’s persona is a blend of Scorpio Zodiac traits, She is calm, passionate, reactive as well as moderately reveal information about her personal and private life.

In addition, Emilia friends and close associates speak of her rare ability to radiate positive vibes that light up a room. She has a number of interests and hobbies that include singing, running, horseriding and ice-skating.

Emilia Clarke has a net worth of $14.3 million as at the time of writing. The origin of “Milly’s” impressive wealth immensely stem from her earnings.

The money made as “Daenerys Targaryen” in the HBO hit series ‘Game of Thrones’. She was reportedly paid $1.1 million per episode in season 7 and 8 of the television series.

As a result, Emilia lives a luxurious lifestyle. That is evident in her spending patterns and possession of assets worth millions of dollars.

The assets include her $4.64 million residence in Venice Beach, California. The house which has deluxe rooms and facilities befitting for ‘the mother of dragons’, also has a garage for Emilia’s cars which include an Audi Q3 and a Ferrari F430.

To wrap up our Emilia Clarke childhood biography, here are untold facts. That is rarely included in her bio.

She has been spotted drinking on several occasions, however, little is known if she is given to smoking.

The actress who is largely involved in charitable works suffered brain aneurysms in 2011 and 2013. As a result, she founded a charity called “SameYou”. That aims to broaden neurorehabilitation access for young people after a brain injury or stroke. 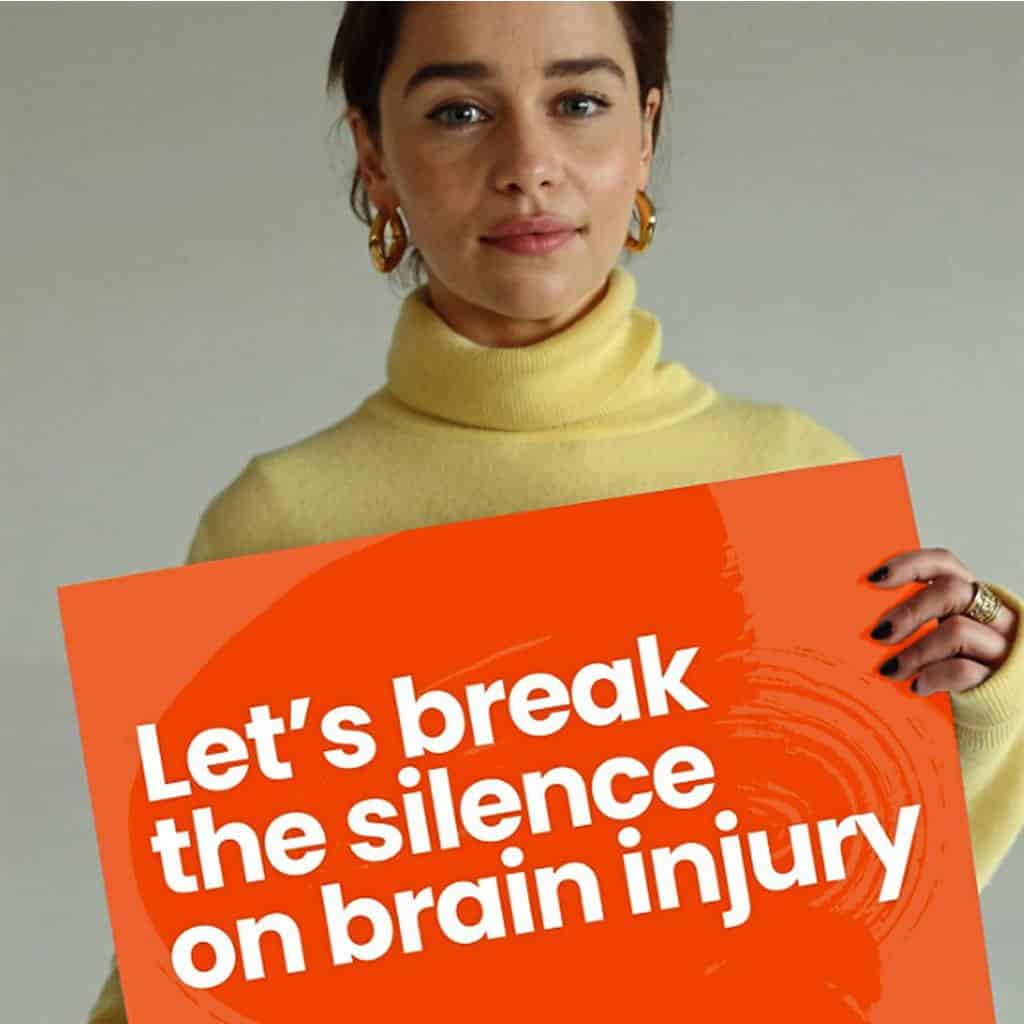 At childhood biography, we strive for accuracy and fairness while delivering the Biography of Movie Actresses.

The Childhood stories of Maisie Williams, Scarlett Johansson, and Kylie Minogue might interest your reading pleasure.