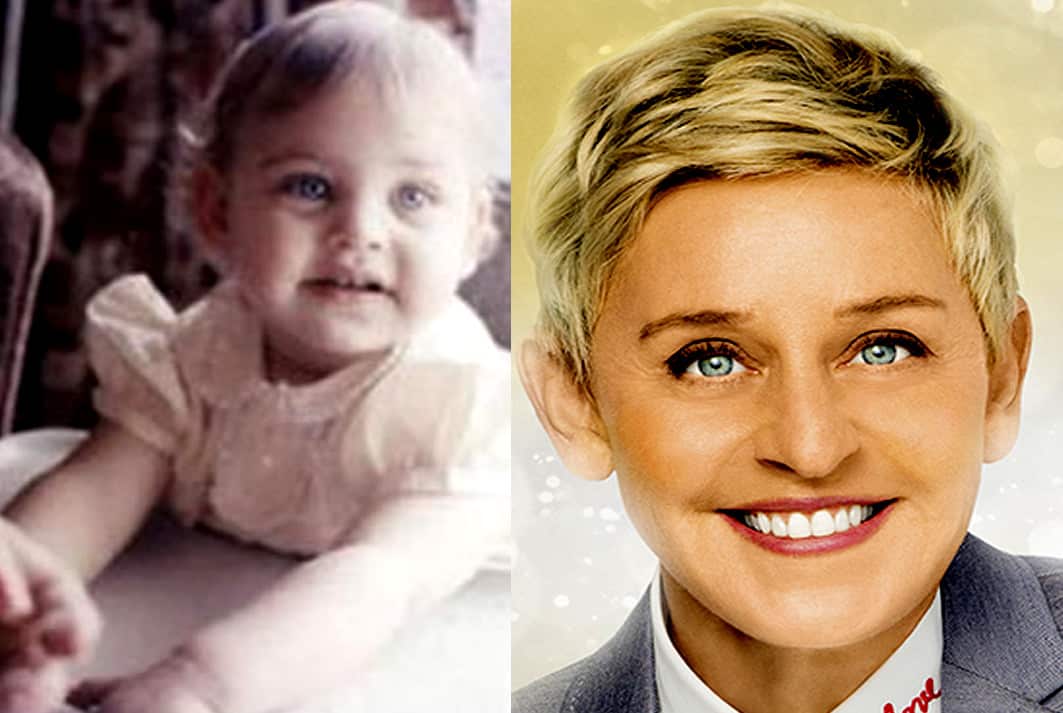 ChildhoodBiography presents the Full Story of an American TV Host with the nickname “ED“.

Our version of Ellen DeGeneres’ Biography Facts, including her Childhood Story, brings you a full account of notable events from her early years to date.

Yes, everyone knows of her quirky observational humour. However, only a few consider Ellen DeGeneres’ biography, which is quite interesting. Now, without further ado, let’s begin.

Funnywoman Ellen Lee DeGeneres was born on the 26th day of January 1958 at the city of Metairie in Louisiana USA.

She is the second of two children born of the union between her mother, Betty DeGeneres and father, Elliott Everett DeGeneres. Behold, Ellen DeGeneres’ parents. 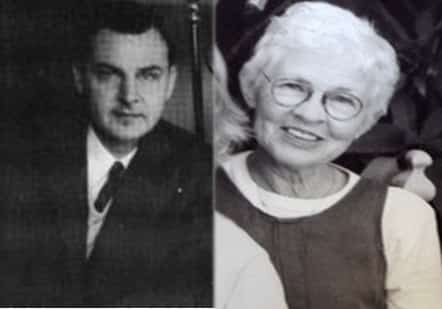 The famed TV host who doubles as a comedian is an American national of mixed ethnicity with Cajun/French, English, Irish, German, distant Dutch, and Swiss-German roots.

In addition, Ellen has her early life rooted in her birth city in Metairie, where she was raised alongside her older brother, Vance DeGeneres. 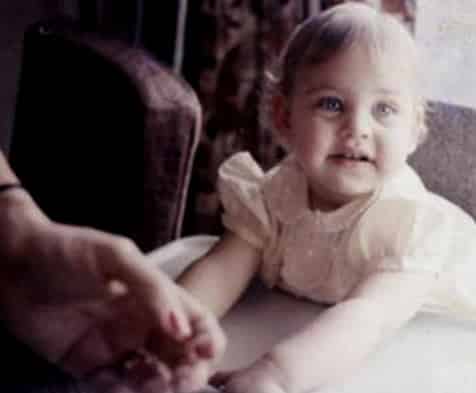 Growing up in Metairie, Young DeGeneres was an observative and outgoing kid who spent the better part of her free time riding a bicycle around the city to explore its beauty and appreciate its uniqueness.

Although DeGeneres’ free and explorative spirit was in sharp contrast to her conservative upbringing, her parents soon made peace with the fact that she was a bird that was too beautiful to be caged. 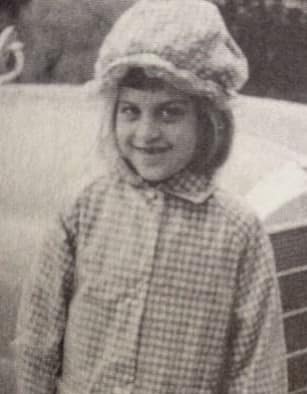 By the time DeGeneres was aged 15 her parents got divorced, a development which made her mother – Betty emotionally distressed.

It was during this period that DeGeneres discovered her innate ability to entertain as she applied innovative tricks to make her mother laugh and deal with the rough phase.

She nurtured the talent through the latter days of her education at Grace King High School in Metairie to its completion at Atlanta High School before attending the University of New Orleans, where she majored in communication studies.

DeGeneres only spent a semester at the University of New Orleans before she dropped out to have brief work experiences as a waitress, bartender, hostess and house painter.

While DeGeneres was at it, she realised that none of the Jobs suited her humorous personality. 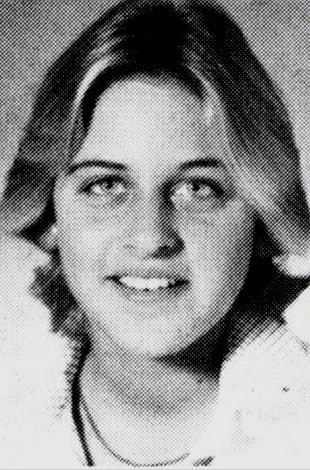 It was television show appearances in the late 1980’s – especially a feature in ‘The Tonight Show Starring Johnny Carson’ – that gave DeGeneres the solid foundations that she needed for career advancement.

It wasn’t long before DeGeneres appeared in sitcoms that include ‘Open House’ and ‘Laurie Hill’ which earned her a new show ‘These Friends of Mine’.

Organizers of ‘These Friends of Mine’ were very pleased with the manner which DeGeneres managed the show that they had the second season of the show named after her as ‘Ellen’.

All was well with ‘Ellen’ which began airing on ‘ABC Network’ in 1994 until DeGeneres character on the sitcom came out of the closet as gay to her therapist, played by Oprah Winfrey in an episode, titled “The Puppy Episode”. 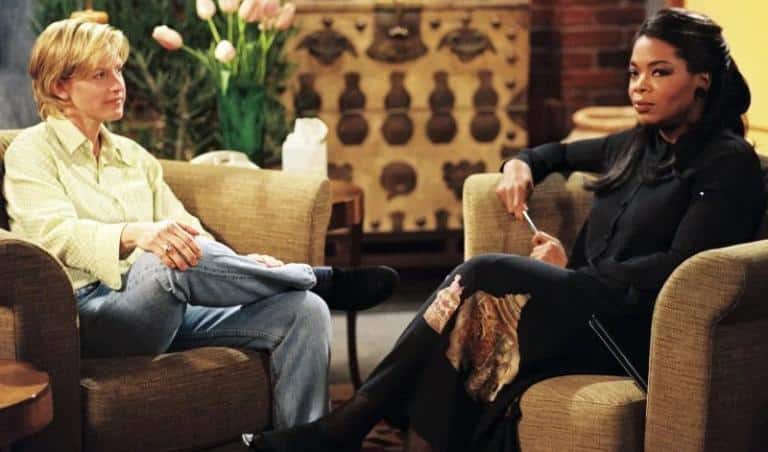 Following the revelation, DeGeneres and ABC executives faced a storm of criticism as she went on to give gay themes to several episodes of ‘Ellen’.

So great were the criticisms that they overpowered the supportive audience which ‘Ellen’ had, a development that eventually led to the cancellation of the show in 1998.

Moving on, DeGeneres re-appeared on TV in 2001 with a new sitcom named ‘The Ellen Show’. The sitcom was short-lived as it only aired 18 episodes before it was cancelled.

With the cancellation, Degenrers bade goodbye to sitcoms and set her sights on daytime television talkshows Thus, ‘The Ellen DeGeneres Show’ was launched in September 2003.

The daytime television talk show did not only receive widespread critical praise during its first season but was also nominated for 11 Daytime Emmy Awards of which it won four. 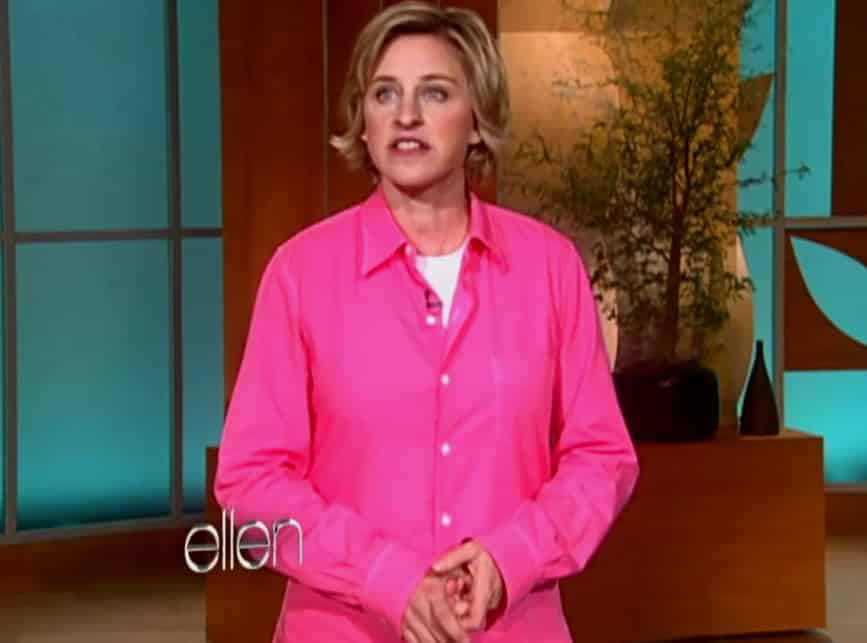 Fast forward to the time of writing ‘The Ellen Degeneres’ show is one of the most popular daytime television talk show that stands out for DeGeneres’ quirky, naive but humorous stories punctuated with her loose-limbed gestures.

What more? she sings and dances with the audience and sometimes give them free prizes and trips with the help of her sponsors. The rest, as they say, is history.

Beyond Ellen DeGeneres career life is her rich love life which has in over 4 decades found expression in her dating and marriage.

Prior to DeGeneres’ rise to fame, she had a number of girlfriends that include the late Kat Perkoff and American producer Teresa Boyd.

Upon revealing her sexual orientation in 1997 Ellen dated her first public girlfriend Anne Heche for about 3 years before she became romantically involved with American photographer and actress Alexandra Hedison for about three years.

2004 was the year which Ellen met beautiful Portia De Rossi who put an end to her dating sprees.

The lovebirds quickly hit it off from their first meeting and tied the knot four years later at their Beverly Hills home.

The marriage was attended by a small group of tight-knit relations who remain ever happy that the couple’s marriage has waxed stronger over the decade.

It is worthwhile to note that DeGeneres and her wife Portia have no son(s) and daughter(s) at the time of writing because they don’t want the commitment that comes with raising children. 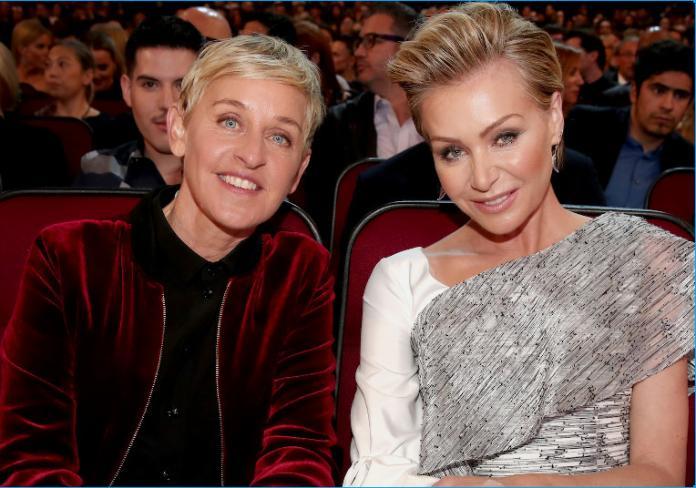 Speak of DeGeneres family life, she hails from a middle-class family background. We bring you facts about the Television host family beginning with her parents.

Elliott Everest DeGeneres is Ellen’s dad. He was born on the 28th of June 1925 and worked as an insurance agent for a significant period. The father of no fewer than two children never had medicine in his whole life because he was a Christian Scientist who conservatively clung to the tenets of the religion. Until his death in January 2018, Elliot had a good relationship with his children particularly Ellen who got the chance to bid him goodbye. 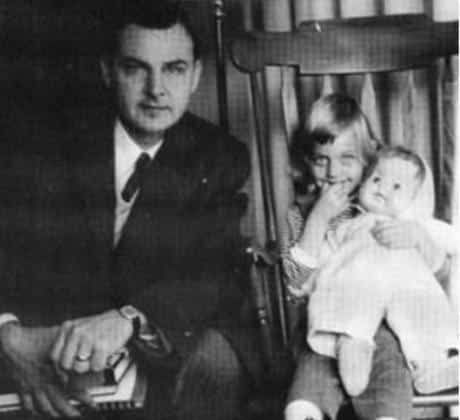 Betty DeGeneres is Ellen’s mom. She was born on the 30th of May 1930 and worked as a speech therapist and actress. It was Betty who raised Ellen after splitting with her husband in the 1970s. What more? Betty was the then-budding comedian first audience when she started exploring her innate humour reserves. The look-alike mom went on to publicly stand by Ellen during the trying aftermath that trailed her coming out of the closet. She even wrote a book titled ‘Love Ellen’ to communicate her understanding and love for Ellen. 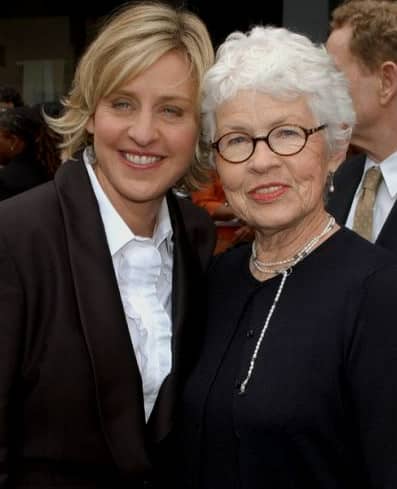 Ellen has no sisters but an older brother called Vance. The elder sibling grew up with Ellen before choosing to stick with his dad Elliot following their parents’ separation.

Known to be a “Jack of all trades” Vance has served in the Marine Corps as a corporal and has explored radio and the music industry.

He is married to his wife Joanna DeGeneres and co-runs Warner Bros’ Carousel Productions at the time of writing. 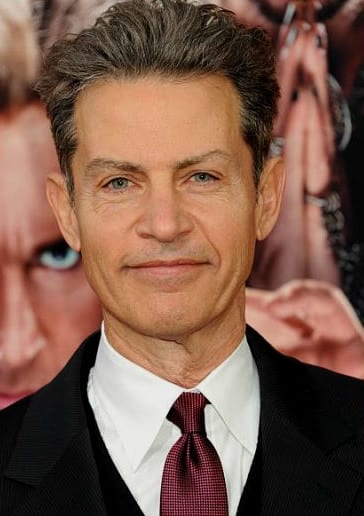 Moving on from DeGeneres immediate family life her paternal grandparents were Elliott Everett DeGeneres and Ruth Elodie Martin while her maternal grandfather and grandmother are William Dick Pfeffer and Mildred Morrill respectively.

Not much is known is about Ellen’s uncles and aunts while her cousins, nieces and nephews have not been identified at the time of writing.

Personality traits that define Ellen DeGeneres are of Aquarius zodiac sign. They include her engaging humour, sensitivity, quirky and philanthropic dispositions, sincerity and openness to revealing details about her personal and private life.

The writer and producer engage in a number of activities that pass for her interests and hobbies.

They include playing and keeping up with tennis games, singing, dancing, collecting antique mirrors, watching animal planet show and spending a good time with her friends and family. 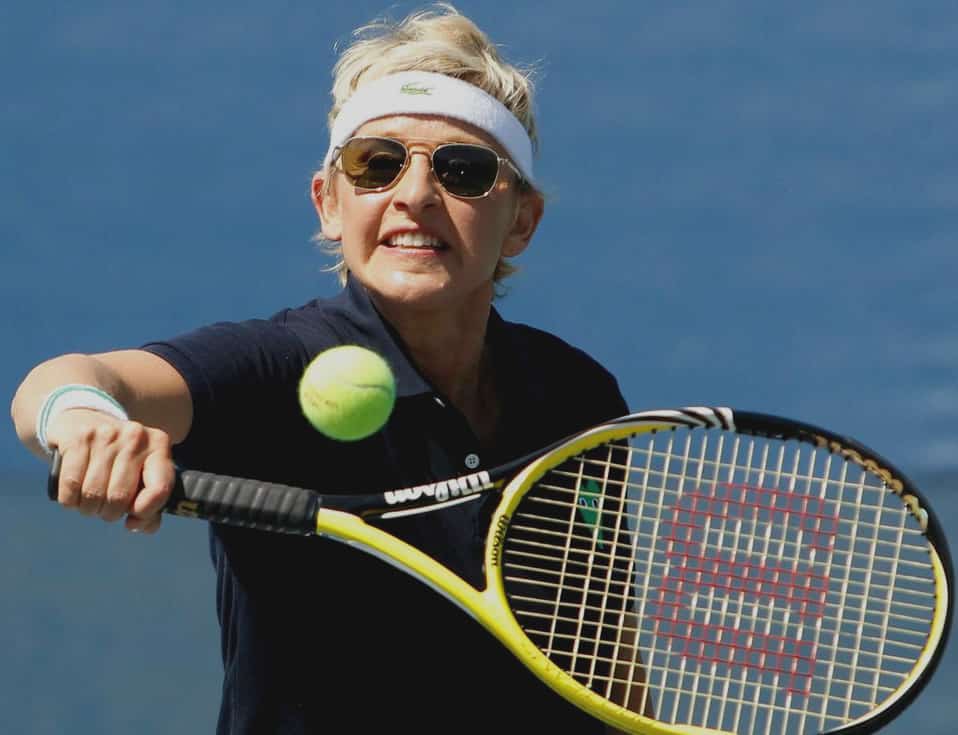 Do you know that Ellen DeGeneres has an estimated net worth of over $400 million at the time of writing?

Constituents of DeGeneres’ net worth have their sources established in her comedy, television hosting, acting, writing, and producing endeavours while analysis of her spending habits reveal that she lives a luxurious lifestyle.

Pointing indicators to such lifestyle include DeGeneres’ penchant for house flipping as she has in the past 15 years made millions from buying and selling everything from an upscale “treehouse” to a traditional horse ranch.

In fact, she loved one property so much that she ended up buying it just months after she sold it.

Beyond DeGeneres’ unbridled taste for Real estate, she has expressed contentment in having a limited number of expensive rides in her car collection.

They include a Porsche Turbo S, Ferrari California as well as a Porsche 911 Carrera S. 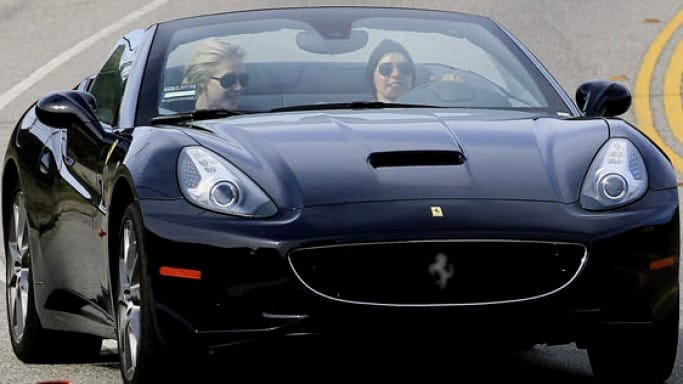 How well do you Know Ellen DeGeneres beyond what we have written about her childhood story and bio? Stick around as we present a few lesser-known or untold facts about her.

The American Funnywoman does not smoke, neither is given to drinking at the time of writing. In fact, DeGeneres quit smoking in 2005 because she was ashamed of the habit.

A decade later she stopped drinking in order to prevent her wife Portia from relapsing to substance abuse.

Ellen DeGeneres parents did raise her in a conservative Christian Science home. She believes in God and confesses that He is everywhere. In addition, she sees God in creatures like trees and thinks of good life experiences as God. 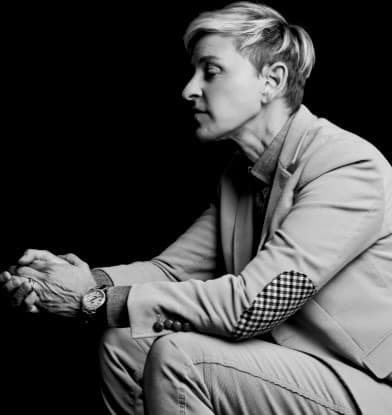 Body arts are probably the last agenda on DeGeneres’ list of interests as her fairly good looks and average great height makes her think less of tattoos. Notwithstanding, fans express their love for the Television host by having body arts of her.

Ellen has proven to be one of the most talented and versatile TV host by having a rich track record in movies appearances notable among them are ‘Goodbye Lover’ (1998) and ‘The Love Letter’ (1999). She also lent her voice to the character of Dory in ‘Finding Nemo’ (1999). 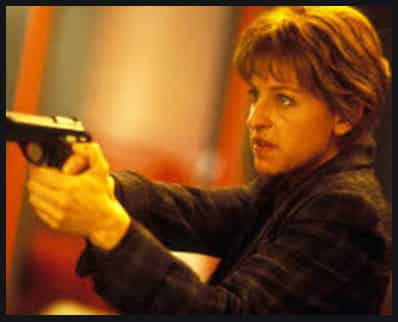 Not many know that DeGeneres is a Vegan. Not just a vegan she is a big animal lover that has severally spoken in support of animal protection legislation.

What more? In 2010 she served as ambassador of a campaign that asked people to adopt turkeys instead of eating them at thanksgiving!

Thanks for reading our Ellen DeGeneres Childhood Story plus untold biography facts. At childhood biography, we strive for accuracy and fairness. If you see something that doesn’t look right in this article, please place your comment or contact us!