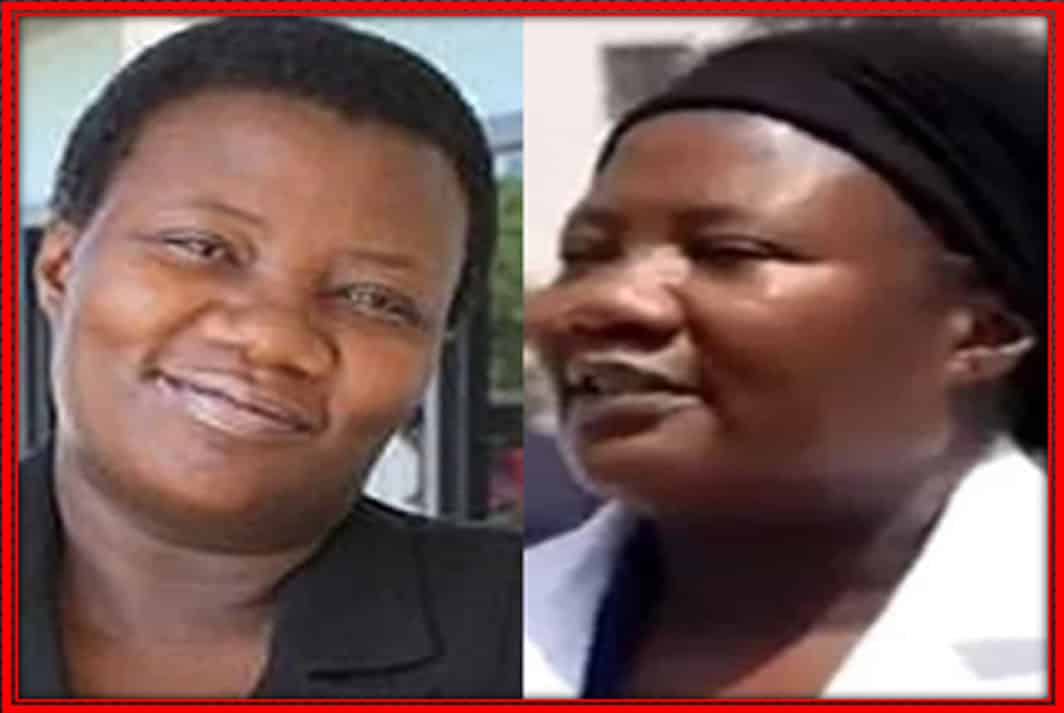 We give you an in-depth breakdown of her life story beginning from her Early Days right through her fame.

You may have seen a few viral videos of her. We know Stella Immanuel for her controversial claims that hydroxychloroquine drugs would cure COVID-19.

Yes, her claims directly oppose that of the World Health Organisation (WHO).

Stella Immanuel is a physician (a Medical Doctor and Pediatric Medicine Specialist). She is also an Author, Entrepreneur, Deliverance Minister, and God’s battle-axe as she wants to be known.

Do Feel at home even as we unfold and furnish you with the captivating biography of Stella Immanuel. Without further ado, let’s begin.

Even as we begin, let’s take this history from the very beginning. The physician’s full name is Stella Gwandiku-Ambe Immanuel.

The Lady was born on the 5th of May, 1965, in Bali, a town that lies west of Bamenda in Cameroun, Central Africa.

Taking a look at the early life of the Doctor and Pastor, she recalled an interest in medicine from the age of four (4).

Stella Immanuel’s Mother made it a ritual to give her kids chloroquine prophylaxis which is formally known as the Sunday-Sunday medicine.

The medication was to prevent the incidence of Malaria; as a result of being situated in a Malaria Endemic area.

Stella Immanuel grew up in a culture of open warfare with bold, generational demons and stubborn strongholds were commonplace.

She feels that violent prayer and open confrontation against the powers of darkness should be taught, learned, and exercised by Christians.

The prayers she believes will ensure success and breakthroughs on various fronts in their personal lives, ministries, and families.

The Physician’s household must have been a middle-class family for having the resources to Sponsor their daughter to study medicine. After which, she would later move to the United States.

Just like many blacks in the US, the Afro-American lady has ancestry from Africa. Even though she has been in the US for about thirty (30) years now.

She is from Bali, Cameroonian, by Birth and origin. The West African country (Cameroun) is located on the gulf of guinea.

Considering that Stella Immanuel is of Cameroonian descent and a first-generation American. We can conclusively also say she is a Cameronian-American.

Before advancing to the career build-up of our focus personality, let’s take a look at the schools she attended. Stella attended Cameroon Protestant College, Bali in Cameroun.

Soon after, in 1984, she went for her tertiary education at the University of Calabar (UNICAL).

In 1990, she graduated from the medical school UNICAL. and later moved to the United States in 1992.

It was in the US that she completed her residency in pediatric medicine at the Bronx-Lebanon Hospital Center, New York. Even though the hospital is now called Bronx Care Health System.

With an intense passion for the medical profession, the young chap began her career at the Pediatric Clinic in Louisiana. In 1998, she began practicing at the southern Pediatric Clinic in Alexandria, Louisana. More details are available in the next heading.

Owing to her determination, the Pastor-physician, without a break, joined the pediatric Care Clinic as a Pediatrician. She would come later in 2006 to own the Rapha Medical and Therapeutic Clinic in Louisana.

After which, she became a registered physician in Texas with an active medical license from the Texas Medical Board.

By the year 2019, Dr Stella began working for Houston’s Rehoboth Medical Center. Though, the Center is owned by her.

She also founded Fire Power Ministries and is the host of a radio and television show entitled Fire Power.

Her prominence became glaring when she came out with claims on a viral video via social media. Stella claims to have a cure for the Corona Virus.

The claims are backed up by the fact that she has successfully cured about three hundred and fifty (350), COVID-19 patients.

The cure, as she mentioned, came through with the combination of hydroxychloroquine, azithromycin, and zinc.

It is worthy to note that any intense scientific research does not support the claim. Besides, there is no drug approved as a specific cure for COVID-19. Stella also says that wearing of facial covering and social distancing is not needed.

The antimalarial medication hydroxychloroquine, previously had its emergency use authorization for COVID-19 removed by the U.S. Food and Drug Administration, which is yet proven to be an effective treatment for the coronavirus.

On July 27, 2020, Immanuel appeared in a Tea Party Patriots-backed press event by a group known as “America’s Frontline Doctors” in front of the steps of the U.S. Supreme Court.

Even though little we know about the self-acclaimed battle axe’s family. Nevertheless, She couldn’t have gone this far without the loving care and sponsorship of her parents. Stella is a single mother with children.

She has exhibited a tremendous show of affection to her kids such that one of her offspring decided to follow the same path of Medicine.

Despite the deliverance minister being single, she has three (3) Kids—the famous amongst her offspring. Mimi Fondong is a graduate of Baylor University and the University of Westminster in London.

Fondong grew up surrounded by people with careers in health care. Inspired by these medical career persons would influence her choice of Medicine from a tender age. She currently resides in Houston.

Not much we know about the other two children. Although one amongst the other two (2) is known as Bernadette, who began attending the University of Houston in 2017.

Stella’s Kids have had the privilege of sharing their ill experiences growing up as blacks in Alexandria, Louisiana.

For the life of a religious minister, The Cameroonian-born Doctor must have adopted the pattern of continuous Prayer.

Even though this is aside from her career place as a physician. Her hobbies also include reading, writing, and public speaking.

Though we know the famous Doctor resides in Houston, Texas. Stella’s salary, cars, or type of house is not known.

However, she is amongst the most influential and wealthiest Doctors of African origin, Dr Stella has an estimated net worth of about $1.1 Million US Dollars.

According to Concordia University’s theological studies professor André Gagné, the Cameroonian-American’s beliefs trace back to African Pentecostalism and the charismatic movement.

She is not just a Christian, but also a Pastor and founder of Fire Power Ministries for Houston, Texas.

The Church involves itself in deliverance, Prayer, and spiritual warfare. She believes her call as a prophetess is to teach God’s wounded army of believers violent war – her motto “the violent taketh it by force”!

Even as we round up our childhood story and Biography article. It’s our pleasure.
also, to present specific information you probably did not know with regards to the Cameroonian- American physician. Without further delay, let’s get the ball rolling.

These are a group of medical practitioners, critical of the scientific consensus around the Covid-19 pandemic. Stella Immanuel is also a part of America’s frontline Doctors.

These physicians have the belief that neither shutdowns nor masks are necessary for fighting the spread of COVID-19.

The founder of the group, Simone Gold, in a letter to President Trump calls for an end to lockdown measures sometime in May 2020. To this end, lots of interviews with social media influencers seemed the best way to reach out to Americans.

The debate has been increasingly dividing Americans along political lines, with proponents of hydroxychloroquine pointing to President Trump’s support of it while accusing critics of covering up its potential effectiveness.

Sermons on Witches and Wizards

The Deliverance pastor, alleged the use of alien DNA in medical treatments, also that scientists were working on a vaccine preventing people from being too religious.

Other claims include blaming medical conditions on witches and demons – a common enough belief among some evangelical Christians – though she says they have sex with people in a dream world.

Another issue that Dr Immanuel targets is gay marriage, saying it can result in adults marrying children. She also advises her congregation against homosexuality.

To this effect, America’s number one citizen retweeted two (2) messages on Tuesday morning criticizing Dr Anthony Fauci, including one that called him a “fraud” and another that said he has “misled the public on many issues.” Fauci, happens to be the face of America’s fight against coronavirus.

The controversial doctor has authored several books as part of her Occupying force series. Five (5) of her books are on Amazon. Some of them include; The Proverbs 31 Man and The Keys to Effective Spiritual Warfare.

The veteran physician has since the controversy on hydroxychloroquine seen enormous growth in followers.

Most recently, Madonna, who recovered from Covid-19, promoted the Dr Stella Immanuel hydroxychloroquine video on Instagram. She Calls Dr Immanuel, a “hero.” Even a Nigerian Pastor,  David Oyedepo Snr. demonstrates his support for Stella and her claims.

We anticipate that you found it fascinating reading our Stella Immanuel childhood story. We saw how the Doctor, out of passion and care for the lives of people, sought by all means to voice out.

Despite the reactions of the WHO and America’s CDC. Who knows lots of lives lost due to COVID-19, might also have been saved.

Haven said all that; it’s our delight that you do well to share your experience with us. Even as we continue to bring you more biography facts with top-notch
accuracy and fairness; rain, come shine. Stay connected fans!