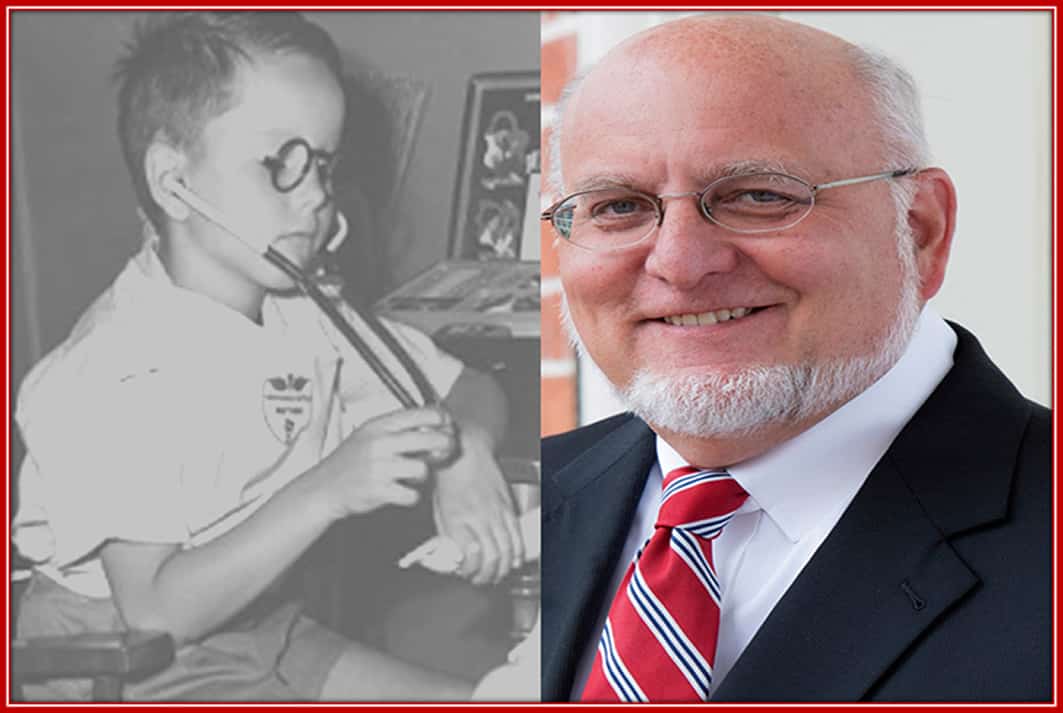 In the nutshell, this is a Life Story of the American virologist. Childhood Biography begins from his boyhood days, to when he became famous.

Without a doubt, he is known for playing a vital role in Confronting the Corona Virus Pandemic in the United States.

As I write his Bio, he is the current Director of the US Center for Disease Control and Prevention. Stay through as we fill you in with his fascinating Memoir.

Before we begin, his full names are Robert Ray Redfield Jr. He was born on the 10th of July 1951 to his parents; who were both scientists.

And would help kick start young Redfield into craving to delve into medical Research as Career. Robert’s dad died while he was much young.

Early Life and Growing up years:

Robert must have had a blissful childhood experience being born into an elite family.
With zero worries about the basic family needs of housing, food and healthcare;
he had opportunities to brainstorm, read and learn.

Even though he had to experience the loss of his father as a child, his mother kept the family love for science on fire. Also having access to his parents library was a huge plus.

Being brought up in a conventional family, with father, mother, and children has proven to give children, the best quality out of life.

Now, that’s what Robert’s family seemed to be, both parents working to provide financial stability. Resources were never an issue.

Yes, Robert is a white-American with history and early life dated back to a census-designated place in southern Montgomery County, Maryland in the US called Bethesda. The City is best known for its medical prowess.

It is home to the National Institutes of Health (NIH) and the National Naval Medical Center of the United States.

It’s uncommon for students in College to work while still in school, but that was Robert’s case.

Dr Robert Redfield attended Georgetown University and worked in Columbia University laboratories where most of their investigations focus on retroviruses in human disease.

He was earning a Bachelor of Science from the College of Arts and Sciences at George University in 1973.

Robert then proceeded to the Georgetown University School of Medicine. He was awarded his Doctor of Medicine in 1977.

Growing up in a household that had a great love for science, Robert thought that the aspect of science that was most appealing was medicine and the human condition. But come to think of it what we confront are viruses.

Redfield, saw that viruses had the potential of being harnessed so that they somehow could be delivery systems for the medicines of the future. And so he became genuinely interested in virology.

The AIDS epidemic just started when Redfield was in training for his fellowship after internal medicine and infectious disease at Walter Reed Army Medical Center (WRAMC) in Washington, D.C. Many personnel involved in AIDS at the beginning were not grounded.

And so Robert began researching on HIV infection – or AIDS at that time. In collaboration with some individuals at the NIH such as Robert Gallo and others at the NCI (National Cancer Institute). He was part of the team that proved that HIV was the cause of AIDS.

He also worked with Sam Broder on some of the new therapies, AZT (Azidothymidine); an antiretroviral medication used to prevent and treat HIV/AIDS. Soon after, working with Anthony Fauci’s group on some of the immunopathogenesis.

As a military doctor serving at the Walter Reed Army Medical Center in Washington for 23 years, he was the first to establish that the disease was not limited to gay men. Soon after, he had his second job at the University of Maryland for 22 years.

He served as a tenured professor of medicine and microbiology and Chief of infectious disease, He also was Vice-chairman of medicine, and a co-founder and associate director of the Institute of Human Virology.

His HIV research colleague Robert Gallo and viral public health William Blattner at the University of Maryland School of Medicine in Baltimore were also involved.

His fame began to spread when President Donald Trump nominated him as Director of the CDC (Centre for Disease Control and Prevention).

Redfield’s appointment started on the 26th of March 2018. His words on the assessment of the coronavirus pandemic has proven second to none by experts and the public. The rest, as we say, is history.

While delivering babies as a medical student, Robert would find the love of his life; Joyce Hoke. She was a nursing assistant at that time. The duo have been married a while now and have six (6) children.

It’s no doubt that is coming from a medical family gives Robert Redfield a sound background for his chosen career in life and immense success too. Could it be that his children would also follow the path of medicine too?

Also, in the medical field and as such, worked at the National Institutes of Health is Robert’s dad. He worked on several things back in the ’50s that became the bedrock of much of science 50 years later.

Redfield’s father died at age 32, leaving Redfield and his two siblings to be raised by their mother.

She, however, also worked at the National Institutes of Health just as Redfield’s dad did. Roberts mum always used to pray that her son would become a “real doctor”.

And that prayer was answered, right? Redfield’s Mum raised him and his other two siblings alone after she lost her husband.

Unfortunately, Redfield’s mum passed away at the age of ninety-six (96).

Just as mentioned afore, Redfield has Six (6) children and also, has Nine (9) grandchildren. Not much info is available concerning his six children. We, nevertheless are aware of two (2) of them joining the medical profession too.

Well enough to know that Redfield had two siblings; and as such should have a nephew(s) and niece(s), In-laws inclusive.

Dr Redfield is not shy about his Catholic faith. He is a member of the Cathedral of Mary Our Queen parish on Charles Street in Homeland.

Redfield and his wife have been active parishioners for decades and serves as a Eucharistic minister (Holy Communion Stewards).

In 1990, Redfield wrote an intro to the book ‘Christians in the Age of AIDS’. The paper urged readers to “reject false prophets who preach the quick-fix strategies of condoms and free needles.”

The conservative Republican, Dr Redfield in less busy times attends Catholic Mass daily.
And so enjoys taking a walk rather than take a car for short distances, especially from his home
in Baltimore to the Cathedral of Mary Our Queen.

He likes writing and is active on social media with his Twitter handle having about 194.6k followers. He is quite a tall man, possessing blue eyes and a bald hairline.

It’s was so evident that People also found it very hard to understand what accomplishments prompted the University of Maryland to consider Redfield to be worth $827,000 for 15 months (that was before he became Director, CDC).

The CDC Director Earns $209,700 yearly.  His net worth is unknown. He and his wife live at a rented apartment close to Washington.

Robert has received a couple of awards through the course of his career as a physician-scientist, including an honorary degree from New York Medical College and a lifetime services award from the Institute for Advanced Studies in Immunology and Aging. We hope he receives more in the Biden and Harris administration.

His Salary as CDC Director:

Unfortunately, Redfield met questions from Democrats, led by Senator Patty Murray of Washington, and it was agreed to reduce his salary to $209,700 instead.

The CDC Director seeks to keep America safe 24/7 using science and data, and to translate that into meaningful public health action and policy. The policy would make people embrace the flu vaccine with confidence, to be available by fall, 2020.

We are sure that reading Dr Robert Redfield’s childhood story and how he chooses his career path without, and not relenting on his parent’s accolades has been fascinating and inspiring. This comes even in the face of criticism. Read an example of such on TheBodyPro.

Do well to share your experience with us. We guarantee you more biography facts with top-notch accuracy and fairness; rain, come shine. Stay connected!

Ref Redfield’s policy concerning renter evictions, in my opinion it’s Communists thinking, pure and simple… If Redfield had said, after the landlord uses reasonable legal efforts to collect rent, and the renter doesn’t pay, the CDC will be totally responsible for paying the rent and all associated costs. It would have been more fair and American, and not Russia thinking/policy. This man needs a permanent one-way ticket overseas. I will support suing the CDC. Pure and simple, a Communist policy.