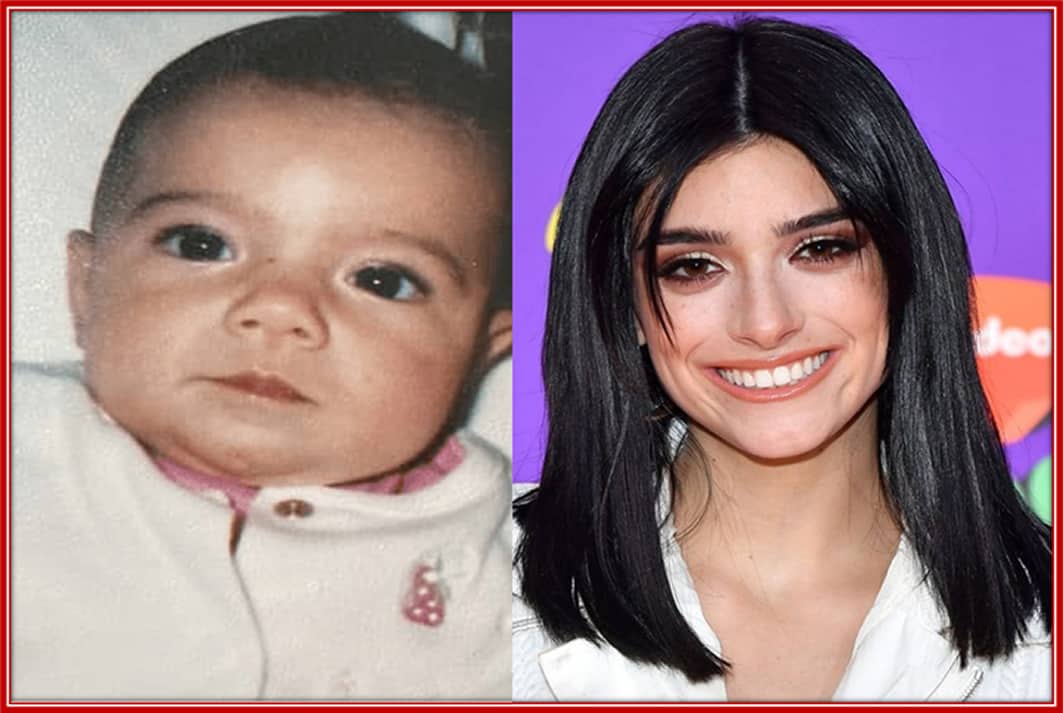 The bottom line is that this chronicle gives you a broad view of the life history of Dixie Jane D’Amelio, widely known as “Dixie D’Amelio.” Our record begins after her birth in Norwalk, Connecticut, until her fame.

Stirring up your craving for our bio, here are pictures of Dixie D’Amelio. Of a truth, the snapshot summarises her Childhood Story and Biography facts from cradle until her global recognition.

Dixie D’Amelio is known for her videos on the social media platform TikTok. Also, the fact that she is big on Social media – just like Austine McBroom, Kylie Jenner, Logan Paul, etc.

Obviously, everyone knows she is the elder of the D’Amelio sisters. Notwithstanding the accolades, there is more to her than meets the eye.

Therefore, relax while you have the fascinating read of a concise piece of Dixie D’Amelio Biography and Childhood Story. Without further delay, let us proceed.

To start with, Dixie Jane D’Amelio was born on the 12th day of August 2001. On a beautiful Sunday, she arrived on earth to her dad, Marc D’Amelio, and her mother (Heidi D’Amelio). Dixie D’Amelio was born in Norwalk, Southwestern Connecticut, U.S.

The American singer and social media personality came into the world amid her younger sister (Charli D’Amelio) and their parents’ union, whose photo we have displayed here.

The young chap got raised with her parents, Heidi and Marc D’Amelio and her sister, Charli, in Norwalk, Connecticut. Long before TikTok even existed, these teen girls spent their time hanging out with friends and taking part in local after-school activities.

Dixie D’Amelio always had a deep interest in singing and dancing from an early age. So she dreamed of pursuing her career as a singer in the entertainment industry. Dixie started uploading her videos on the TikTok platform, which gained her popularity and success.

Since her existence, the American singer and social media personality has enjoyed massive support from her parents. Her parents were hardworking enough to provide the necessities of life. Dixie belonged to a middle-class household.

Her mother, Heidi D’Amelio, was a photographer and a former model. Meanwhile, her father, Marc D’Amelio, is a business owner and former Republican Connecticut Senate aspirant.

The young star is American. Both of Dixie’s parents were born in the United States. However, their names betray a Germanic ancestry. Heidi is a Germanic feminine name. It is a diminutive of the name Adelheid (English: Adelaide), which means “of noble birth”.

On the other hand, Amelio is both a surname and a name. This name evolves from the Germanic-Gothic name “*amal / ama-l”, meaning “work, courage, bravery, boldness, diligence.”

So far, we deduce Dixie D’Amelio is of White ethnicity. Notwithstanding her Germanic heritage. Following is a photographic representation of Dixie D’Amelio’s family origin.

Furthermore, she took part in track and field during her and played lacrosse. Dixie D’Amelio also competed in the Midget Girl’s race at the 2012 Connecticut Junior Olympics.

After that, she proceeded to college at an online university in the United States. Howbeit, a report has it she refused to go to college to avoid the challenge of travelling a lot for her TikTok videos.

Jane started her career as a social media celebrity after her younger sister reached immense popularity across social media platforms.

D’Amelio’s road to fame began after her sister, Charli D’Amelio, gained popularity on TikTok. In 2020, Dixie, with her sister, endorsed a contract with United Talent Agency. The duo also signed a deal with Ramble Podcast Network.

That same year, she also carried out her acting debut in the famous Bra series on YouTube entitled Attaway General. Later that year, in June, Dixie released her first single, Be Happy.

In December 2020, D’Amelio dropped her singles “One Whole Day” with Wiz Khalifa and “Roommates,” which was co-penned by Demi Lovato.

In May 2021, D’Amelio and her sister, Charli, co-created to become Hollister’s Social Tourist apparel’s face and collaborated with Simmons Bedding Company to model and issue the Charlie & Dixie x Simmons Mattress.

D’Amelio starred alongside her family in The D’Amelio Show’s Hulu docuseries, which premiered in September 2021. She will start with her sister in the Snap Creative reality shows Charli vs Dixie.

Who is Dixie D’Amelio Dating?

Dixie D’Amelio’s marital status is “unmarried.” But then. In October 2020, D’Amelio affirmed she was in an affair with the social media personality Noah Beck. Dixie and Noah Beck’s Relationship could make one fall in love again.

In addition, prior to her dating Noah Beck, D’Amelio was previously briefly in a relationship with Griffin Johnson between 2019 and 2020.

Yet again, she had been in a romantic relationship with her high school boyfriend, Matt Garavel. They attended the same school and have a strong liking for sports.

The D’Amelio clan is known around the world as “the first family of TikTok,” as noted by The Guardian. They have become a phenomenon globally.

At this point, in this life story, let’s talk about each member of Dixie D’Amelio’s household. Indeed, she could not have made it without the support of members of the home.

Dixie’s father, Marc D’Amelio, is a former Republican Connecticut Senate candidate and business owner. Marc D’Amelio ran for at-large representation on the Norwalk Public Schools Board of Education in Connecticut.

He received a B.A. in political science and government from the University of Connecticut at Storrs in 1991. D’Amelio has worked for several organizations within the apparel industry.
He founded Madsoul Clothing Company in 2000 and Level 4 Collective Showroom in 2007.

Heidi D’Amelio is the mother of Dixie D’Amelio and her Sister, Charli. She was a model and is now a personal trainer. Heidi is married since 2000 to the love of her life, Marc D’Amelio. The couple met in New York back in the 90s.

The duo couldn’t wait to start a family together. They have two daughters. Marc and Heidi D’Amelio, are passionate about raising their kids as online icons. When their teen daughters were old enough to use social media, Marc and Heidi helped them stay on the right track.

Although lines are crossed at some points, with what should and someone should not post. “We let them have their space and freedom to figure it out, but we are not far away,” explained Heidi.

Charli D’Amelio is the only sister and sibling to Dixie. Just like Dixie, she is also a social media personality, especially on TikTok. In addition, Charli is also a competitive dancer.

She began competitive dancing for over 10 years before starting her social media career in 2019. Charli then started actively posting content on the video-sharing platform TikTok, where she began posting dance videos to trending songs on the platform.

The young American should have other relatives. Of course, Dixie D’Amelio should have a few extended. She did not appear out of the blues.

Apart from her father, mother, and Sister, Dixie D’Amelio has uncles, aunts, grandparents, among others. However, of all her relatives, we could identify with none.

Jane is a young and gorgeous girl with a charming personality. She owns an attractive body, a cute smile, and adorable looks. Her long and shiny hair is mesmerizing. The Norfolk-born enjoys playing hockey.

Not to mention her outfits. She arrived at the 2021 MTV Video Music Awards wearing an Aliétte Zee Dress. Unlike her sister, Charli and friends, Dixie does not have a tattoo. Who knows, she could have one in the future.

Besides singing, she loves to take part in track and field events. Dixie D’Amelio is a popular social media figure worldwide, notably in the United States. She makes use of her ѕосіаl mеdіа tо maintain соnnесtіоnѕ wіth hіѕ growing fаnѕ.

Dixie D’Amelio has over 7.08 million subscribers on her self-titled YouTube channel and has over 454 million views on her YouTube videos. She has over 46.3 million followers on her TikTok account.

Compared to her peers, she can afford to have what her heart longs to buy. Dixie lives with her parents and sister in Nichols Canyon, Los Angeles. Nichols Canyon is a Hollywood Hills neighbourhood. The property is to be worth over USD 5.5 million.

As of 2021, Dixie D’Amelio’s net worth is about $3 million. As per reports, she mainly earns through many adverts and sponsorships. She also earns money via her singing and acting projects.

In August 2020, she endorsed a record deal with L.A. Reid’s label, HitCo Entertainment. Forbes published a report in 2020 revealing D’Amelio earned $2.9 million from her many sponsorship deals and merchandise, making her the third highest-earning TikTok star.

Below are a few impressive other facts about the American Social media personality and singer Dixie D’Amelio.

She is an aspiring model and has developed an interest in modeling. In addition, aside from the striking resemblance to her sister Charli. She is also a good dancer.

The American competitive dancer, just like many of Germani ancestry, is a Christian. She believes in the three-in-one God that made heaven, earth and the universe.

The belief originated with the Jewish religion. Christians believe Jesus is “Messiah” or saviour of the world. They also think that he is the son of God.

Following D’Amelio’s meet-and-greet in November 2019, she and her family donated the money earned from ticket sales to a special needs fundraiser.

Dixie has made collaboration videos with fellow social media stars like Bryce Hall, Daisy Keech, and many others.

She has also issued several singles so far, including the US Bubbling number one “Be Happy”, “Naughty List”, “Fuckboy”, and “Psycho”. Here is a clip of collaborations with her sister, Charli.

TikTok star Dixie D’Amelio has confessed that she’s finally gone through with her nose surgery, comparable to her sister Charli’s operation in early July, and has explained why she waited a bit longer to get it done.

Loads of sidetalks have kept fans asking if Dixie D’Amelio were to perform at the Grammys? The truth, however, is that they have not nominated Dixie for a Grammy for either of her songs.

Even though it’s gotten some incredible buzz, her music was not eligible because she released it way after the cutoff date for voting.

For a flip through Dixie D’Amelio Biography and Childhood Story, wе hаvе соmріlеd аll аbоut her. So far, we talked about her Networth, Age, Height, Weight, Boyfriend, Parents, Sister, Relatives, Rise to fame and more.

As we round off Dixie D’Amelio’s Biography and Childhood Life Story, we guess you could pick up a few lessons. There is a common saying that there is room for everyone to succeed at the top. However, most people don’t get there because of rivalry and strife.

But then that is not the case with Dixie and her younger sister, Charli. Notwithstanding that her rise to prominence began after her sister, Charli D’Amelio; Dixie D’Amelio still gained popularity on TikTok. As a matter of fact, her achievements are listed on the Forbes list.

We hope you had a fascinating read throughout our Bio story. Subscribe for more of our biography. The accuracy and top-notch quality are our trademarks.

While delivering you the Childhood stories of Internet Celebrities, we always strive for accuracy and fairness. If you see something that doesn’t look right, contact us!