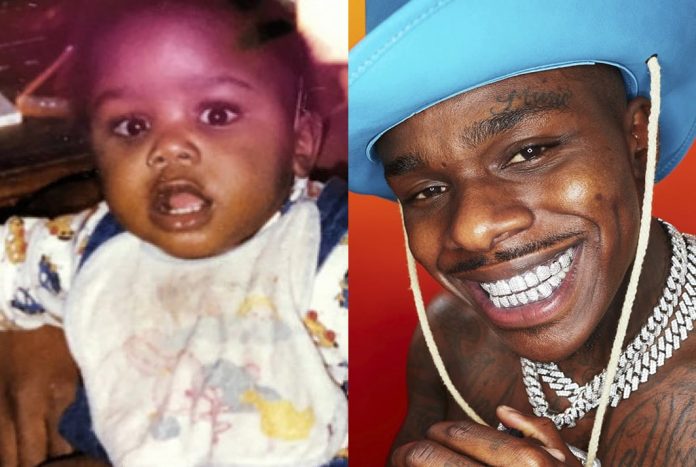 Yes, you and I know he is one of the best new rappers in the US. However, only a few consider DaBaby’s biography which we’ve prepared and it’s quite interesting. Now, without further ado, let’s begin.

For starters, DaBaby’s real name is Jonathan Lyndale Kirk. He was born on the 22nd day of December 1991 in Cleveland, Ohio. DaBaby is the youngest of three children born of the union between his father and his mother.

The singer spent the first 5 years of his childhood in Ohio. Early on in his childhood (at the age of 6), DaBaby’s parents relocated from his birthplace to Charlotte, North Carolina. Leaving Ohio meant letting go of all his childhood friends and acquaintances.

Indeed his experience of moving out from his birthplace took a toll on him as he had to adapt to the lifestyle of his new neighbourhood in Charlotte.

DaBaby was born into a family whose head (his dad) had a keen interest in education. One would rather address his origin to have sprung out of an academic family background. Notwithstanding, DaBaby is an American national and has an Afro-American ethnicity which is visibly evident in his skin completion. Could this explain his Nigerian origin?

Soon after Dababy’s family moved out of Ohio, the youngster saw himself becoming entwined with the rough life of the street. He had a hard time adapting to the lifestyle of the streets but strived so hard to ensure his survival in his early life.

Growing up in the streets, DaBaby consequently had run-ins with the law and developed a track record over the years. The singer was arrested on numerous occasions for different crimes ranging from driving with a revoked driver’s license to illegal possession of marijuana.

Over time, DaBaby came to an understanding of the pains faced by the less-privileged-folks who had to resort to criminal offences to make ends meet.

DaBaby became determined to help people who were seriously experiencing run-ins with the law in the quest for their daily bread and felt he could do so by venturing into music. However, the singer couldn’t fully jump into making notes as he needed to face his academic pursuit for the time being.

Still on, DaBaby’s family concern for education was so strong that the singer had no option than to enrol at Vance High School where he graduated in the year 2010. He also went on to study at the University of North Carolina in Greensboro.

Two years into his study at the University, DaBaby dropped out of school with a full conviction of venturing into a singing career. The upcoming singer declared that he only went to school as a result of his parents’ plight.

DaBaby parents’ acceptance on his decision to drop out of school left him with one thing- That his conviction without hard work would only result in a wishful thinking. DaBaby understood this principle and swung into full action by taking the first two years after his drop-out to prepare himself so well for an explosion in the entertainment industry.

The earliest work of DaBaby’s career was the release of his debut mixtape, – Nonfiction – in the year 2015. Although the mixtape did not gain much recognition, DaBaby continued to produce several other tracks.

One of the earliest hurdles faced by the prolific singer was the act of deciding on a stage name. Early on, DaBaby had adopted the name “Baby Jesus” which he later considered to be religiously inappropriate. He, therefore, changed the name to DaBaby which became his professional name in his career. His real names “Jonathan Lyndale Kirk” wasn’t seen as an option.

DaBaby realized that his nickname was not enough to propel him to the height of success he desires in the music industry. He had to work an extra mile to ensure he amas enormous fame in his career. His name began to show signs of echoing throughout the world as he took the biggest step of signing to Arnold Taylor, South Coast Music Group label.

A big highlight in DaBaby’s biography was when he signed a short-lived distribution deal with Jay-Z’s Roc Nation for his Blank Blank mixtape which was released in 2018.

The hardcore singer soon started his imprint label called Billion Dollar Baby Entertainment. While maintaining his contract with Interscope, he released his debut album – Baby on Baby – on the 1st day of March 2019. His album for the first time hit number 25 on the Billboard 200 albums in the US. This was one of the major highlights of Dababy’s biography, one he won’t forget in a hurry.

DaBaby was soon featured on the cover of XXL’s Freshman Class of 2009. He has also been featured on several other hit songs by different artists including Post Malone, Camila Cabello, and Megan Thee Stallion since his rise to fame. It would interest you to know that 2019 was indeed a successful blast for DaBaby as he closed the year having the most entries (22) on the Billboard Hott 100.

Also a point to note in this biography, the young singer also received two nominations, both for his hit Single – Suge – in the 62nd Annual Grammy Awards held in the year 2020.

Although the young lad has amassed quite a fortune, he still has more excellent performance up his sleeves to entertain the world with. The rest, as they say, is history.

Who is DaBaby’s girlfriend?

The relationship life of the American rapper has been quite fascinating. In this section, we’ll share with you details of DaBaby’s love life.

First and foremost, Dababy had once been in a romantic relationship with his girlfriend turned baby mama who goes by the name MeMe. The two love birds began to officially date following MeMe’s conception for the American rapper.

DaBaby soon became the father of two and assumed his paternal responsibility to their two children – his first daughter from their relationship and the son of MeMe from her past relationship. Although the two love birds are not yet married, but they are expecting their third child together at the time of writing.

Secondly, he was rumoured to have been married to Ashley Kirk, and thirdly, he was romantically linked with the singer Jessie Reyez.

Replying to all these allegations on Instagram, DaBaby vehemently denied having an affair with the aforementioned ladies let alone marrying anyone of them.

The American singer seldom talked about his family life experience. Nonetheless, we present you the most intriguing information about every member of his family starting with his parents below.

DaBaby’s father and mother were inclined in ensuring that their children enjoy life to its fullest capacity. Like many other parents, they worked hard to ensure that their son gets a formal education which would help him take up a professional career in the nearest future. Although their intension for DaBaby was good, he, however, dropped out of school to pursue a career in rapping.

The young rapper has two elder brothers and does not have a sister. Even though he has made it big in the entertainment industry, he has not taken to any social media platform to disclose the identity of his brothers. It is also worthwhile to presume that DaBaby may also have nephews and nieces born of his elder brothers whom the world is yet to hear about.

About DaBaby’s relative(s)- Does he have Nigerian Roots?

It has been consistently argued that the ancestry of the rapper is mostly of Nigerian roots. The history of his paternal and maternal grandparents needs to be tracked to ascertaining the veracity of this argument.

Furthermore, DaBaby has not in any way recognized anyone as his uncle or aunt in the course of undertaking any form of interview.

Who is DaBaby? What makes him tick?…. Sit back as we bring you makings of his personality to help you get a complete picture of him. To begin with, DaBaby’s persona is a blend of Capricorn zodiac traits. The rapper is practical, realistic, and ambitious, a characteristic befitting of his zodiac traits.

One of the basic reasons for venturing into music as stated by the American rapper is to help people. However, DaBaby also has a personalized way of marketing his songs. Aside from rapping, DaBaby has been classified as a humble marketing genius and sometimes, a cowboy. Did you know?… DaBaby once appeared at SXSW in a diaper.

Also on his personal life, DaBaby does not often talk about his hobbies. Nonetheless, he frequently wears a blue charlotte jersey in some of his melodies. His basketball outfit is an indication that the veteran rapper has an immense interest in the game. No wonder LeBron James became one of his huge fans in no distant time.

The rapper has not only gained fame and prominence in the music industry, but he has also amassed quite a ton of wealth and valuable assets.

Dababy has an estimated net worth of $5 million at the time of putting up this writeup. The origin of his wealth stems majorly from his musical endeavours while analysis of his spending pattern shows that he lives a luxurious lifestyle.

Unlike many other celebrities, DaBaby does not flaunt his luxurious house on the internet. He kept to his words of helping people through music and also bought his whole team new cars pictured below.

Does Dababy own a Private Jet?

To wrap up our DaBaby childhood story and biography, here are some lesser-known facts that will help you grasp a complete picture of his personality.

Fact #1: His Idols and Childhood motivators:

DaBaby did not just mistakenly jumped into rapping at the course of his music career. Early on, he grew up listening to the rap musics of Eminem, 50 Cent, and Lil Wayne. Their music style has greatly influenced the music pattern of DaBaby.

DaBaby was once involved in a dangerous incident that led to the death of a 19-year-old at North Carolina Walmart. Now let’s tell you how it happened.

Towards the end of 2018, DaBaby was shopping with his one-year-old daughter, MeMe and her five-year-old son from a previous relationship when the 19-years boy suddenly attacked him. DaBaby acted out of self-defence and shot the young lad at the very spot. In no distant time, all charges against him were eventually dropped.

Fact #3: Is DaBaby a Nigerian?

A lot of controversial opinions have been made about the true origin of the veteran rapper. DaBaby took to Instagram to share some pictures of himself dressed in Nigerian attire.

He had dressed up in the traditional attire while honouring the wedding invitation of one of his Nigerian friends. The picture below gives a more convincing image of DaBaby as a true Nigerian.

DaBaby often smokes and drinks. He is also not left out in the world of tattoo as he has inked several numbers of tattoos on his body.

Some of his tattoos include; a Latin saying “Carpe diem” inked on his wrists, a word “true” tattooed on the fingers of his left hand, a huge inscription “SACRIFICE” decorated on his left forearm and a phrase “No weapon formed against me shall prosper” engraved on his right forearm.

Thanks for reading our story on DaBaby. More so, believing in What we are and What we do. At childhood biography, we strive for accuracy and fairness. If you see something that doesn’t look right in this article, please place your comment or contact us!