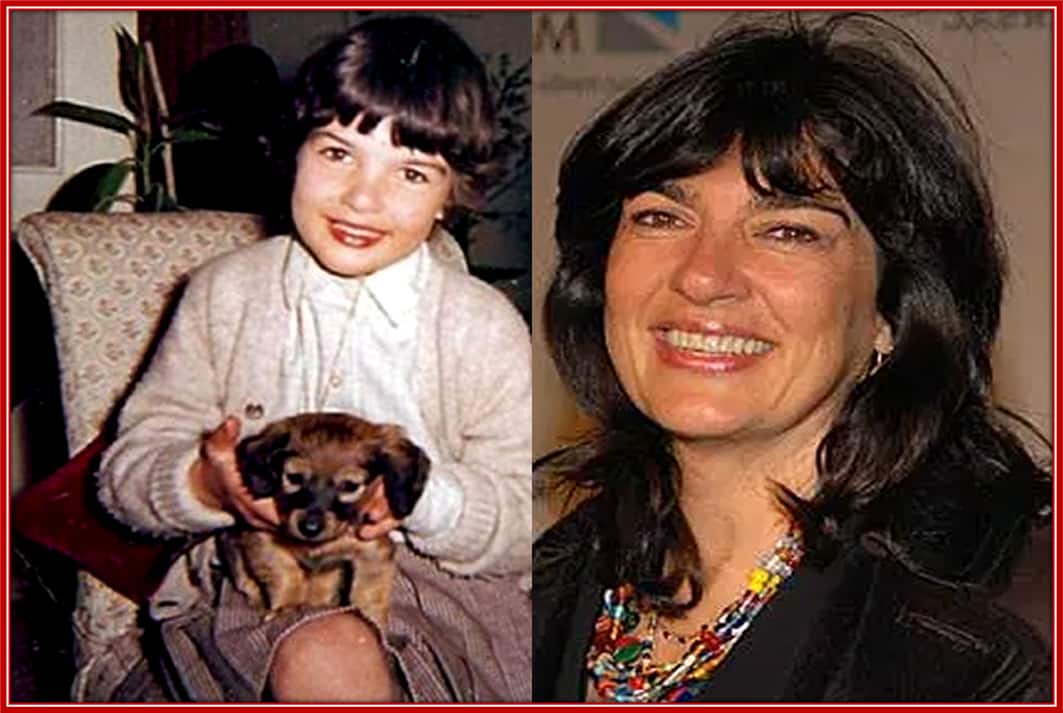 Simply put, it’s a complete analysis of her life story right from her early years to when she became famous as a television host.

It is no longer news that she is one of the best TV Anchors in the world. While only a few complete versions of Christiane Amanpour’s Biography exist out there, we’ve decided to prepare ours. Without much delay, let’s get the ball rolling.

For biography starters, part of her real name is ‘Maria Heideh’, and she is a British-Iranian journalist, NOT a US national.

Christiane Amanpour was born on the 12th day of January 1958 to her Persian father, Mohammad Taghi Amanpour, and an English mother, Patricia Anne (née Hill) in Ealing, London. The TV host was born in Ealing is a district of West London, England.

Your favourite CNN International Anchor is the eldest of two children born of the union between her parents.

A few years after her birth, Christiane Amanpour’s Family relocated from London to her father’s homeland, Iran.

There, she lived a cheerful life with her sister until she was eleven. As a little girl, Amanpour enjoyed a privileged life. Truth be told, her early years were filled with enormous comfort and happiness.

First and foremost, she hails from a multiracial household. A look into her ancestry shows that Christiane Amanpour’s parents (from her father’s side) are of Iranian descent, while her maternal family roots are of British descent.

Thanks to her diverse ethnicity and family roots, the British-Iranian journalist is quite fluent in speaking English and Persian.

Early on, she was quite fortunate to learn about the culture of her bloodline while growing up. It is therefore okay to assume that Christiane Amanpour’s experiences in Iran and England have over time shaped her into the woman she has become.

Right from childhood, your favorite CNN anchor had access to everything she needed as a little girl.

In case you didn’t know?… Christiane Amanpour was born into a wealthy family background. This fact, right from her early years, had always spelled a brighter future for her.

Back in the day, Christiane Amanpour’s parents were capable of providing her with the financial and moral support she needed to excel in life.

Being fully reassured of her family’s support, she was firmly prepared to face life’s challenges head-on.

First, is the fact that she spent her first few years in Iran. Life in the middle-east was fun as the future CNN celebrity made lots of friends both at home and in her day school.

At the age of 11, Christiane Amanpour’s parents decided to enroll her at a boarding school.

In no distant time, every one of her households moved from Iran to England. Christiane Amanpour’s family had preferred to stay in Iran but could not return there because of the impending war between the country and Iraq.

It was these uncharismatic events and wars that triggered the zeal of her becoming a journalist.

In order to prepare herself for the future, the future television host enrolled at Holy Cross Convent, an all-girls school in Buckinghamshire, England.

At school, Christiane Amanpour was a smart kid that made good grades and paid attention to her studies.

At the age of 16, she got transferred to a Roman Catholic school called New Hall School in Chelmsford. Upon graduation, Christiane Amanpour moved to the United States in order to study her dream course – which is Journalism.

The British-born Iranian began studying journalism at the University of Rhode Island located in a U.S. state in New England. Subsequently, she graduated with a BA degree in journalism from the University in the year 1983.

The soon-to-be journalist knew what she wanted even before graduation. While in school, she began working in the communication industry.

Christiane Amanpour was the type who didn’t give any room for laziness. Back then, she worked as an electronic graphics designer for the local commercial TV station NBC.

Just after graduating from the University, Amanpour got a job with CNN. She began from the grassroots by working as an entry-level assistant at the international assignment desk.

During her early career with CNN, Amanpour showcased the tale and personality of a gutsy reporter as she covered events in highly risky and dangerous areas.

As a junior staff, her aim was to get to the very top. That could only come by doing the unthinkable. In her quest to becoming a formidable News correspondent, Amanpour took up the responsibilities of covering several life-threatening events.

First, she was assigned to cover the Persian Gulf war. Later, she covered the Bosnian war including others.

The truth is, her experience with reporting from the war-stricken zone was not completely convenient.

During the Bosnian war, many critics accused the British-Iranian journalist of presenting unjustified reports. Some of them claimed that she presented her reports in favor of Bosnian Muslims.

However, Christiane Amanpour stood fearless in the face of criticism and war. In no time, she became a household name for her courage in reporting from a conflict-stricken zone.

Fast forward to the time of publishing her life history, Christiane Amanpour has stamped her name in the list of biggest faces of CNN personalities.

Do you know?… she was the first correspondent to interview the Pakistani and Afghan presidents after the 9/11 attacks.

Without any doubt, her gutsy and courageous characteristics are well respected by great CNN anchors like Chris Cuomo and Don Lemon. The rest, as they say, is history.

A look into Christiane Amanpour’s biog shows that she had been involved in several romantic relationships since she became popular.

First, of her relationship, we know is that fact that she once dated Paul Marchand a radio journalist as well as Luc Delahaye a combat photographer.

A few years after her last relationship, she met James Philip Rubin, the Assistant Secretary of State for Public Affairs.

Did you know?… James Philip was also an informal adviser to former President Barack Obama and former US Secretary of State Hillary Clinton.

Amanpour met James Philip in Bosnia in the year 1997 and soon fell in love with him. The following year, the love birds took the next step of tying the knot as husband and wife.

However, in the year 2018, the married couples signed a divorce petition and went their separate way.

Who are Christiane Amanpour’s Children:

The marriage between the television host and her husband, James Philip, led to the birth of her only child.

Upon birth, the couples happily named their son Darius John Rubin. Even after their divorce, Amanpour and her ex-husband always make out time to attend to the needs of their son.

A close-knitted household, as we all know, is one of the core foundations that influences a child’s future.

Here, we present to you Christiane Amanpour’s family members and how they have greatly influenced her success story. Let’s start with the woman who gave birth to her.

The British-Iranian journalist was born to her English mom, Patricia Anne (née Hill). Amanpour’s mum (Patricia) met her dad when she took a trip to Iran.

Fortunately, the two got married and bore Christiane Amanpour and her sister. Thanks to the motherly advice of her mom, our famous news correspondent grew up into a wonderful woman.

Another notable and unforgettable figure in the life of the CNN journalist is her dad, Mohammad Taghi Amanpour.

Did you know?… He was an Iranian airline executive who has been rich from the very start. Mohammad Taghi’s influence in the political aspect of Iran was responsible for ensuring his family’s survival in the face of the Iranian adversities.

First and foremost, she has no brother but a younger sister who goes by the name Lizzy Amanpour. Not much information is known about Christiane Amanpour’s sister- Lizzy.

However, only time will tell if the little one will be brought into the limelight by a future event.

information about her ancestry exists. Amanpour’s paternal grandparents are Seyyed Amanollah and Parvin os-Saltaneh while her maternal grandfather and grandmother are John Sydney Thomas and Florence Mary.

Very little or no documentation exists about her uncles and aunts as well as her nephews and nieces.

What makes Christiane Amanpour thick? Sit back as we bring you the making of her personality.

Do you know?… her horoscope is a blend of the Capricorn Zodiac traits. On this note, Christiane Amanpour is the type who is quite ambitious and disciplined in her dealings.

It would interest you to know that the British-Iranian loves jewelries. She always wears her Iranian Gold bracelets and bangles, sometimes on TV.

The CNN correspondent disclosed that her pastime is Horse riding. Surprisingly, she had learned how to ride a horse from a former Iranian Army colonel.

The Net Worth of Christiane Amanpour is estimated to be a whopping sum of $12.5 million (2020 figures).

The source of her wealth stems majorly from journalism. As a matter of fact, Amanpour earns an annual salary of $2 million with CNN. She lives a luxurious lifestyle with her earnings.

The British-Iranian journalist owns a luxurious mansion as well as several expensive cars.

Since she was mostly working in areas that were affected by wars and crises, Amanpour is the type who has a great love for acquiring armored cars, which she desires for her protection in times of danger.

To wrap up our prosopography, here are some lesser-known facts about her that would help you grasp a full picture of her person.

The complicating story behind Amanpour’s religious life is that; she was born to a Christian mom and a Shi’ite Muslim dad.

Her husband was a Jewish-American and a Jew by religion. While her family resided in Iran, she attended a Catholic church in Tehran. Not to forget, she also went to a Catholic school.

With all these divisions, the big question is… What is Christiane Amanpour’s religion? Truth is, she does not take sides with any of the three religions.

Over time, she made intense research and discovered that all three religions pointed to the same ancestor – Abraham. Notwithstanding, most report has it that she is a Christian and still attends mass each time she gets the chance to do so.

Christiane Amanpour revealed that she doesn’t sleep for long. She sleeps late and both her and her son wake up as early as 7 a.m. every day.

Thereafter, they both listen to NPR News broadcast and finally prepare to leave the house for work and school at 8 a.m.

Journalism is not the only thing that Christiane Amanpour is good at. For the records, she has appeared in a few popular movies.

We’ve prepared a table to help you get concise and quick information about Christiane Amanpour.

The memoir on Christiane Amanpour has made us understand that determination is true, the wake-up call to the human will.

She, without doubt, motivates many young and fearless female journalists whom we see today at war fronts. Amanpour looked beyond her parents’ wealth and went on to risk her life to become who she is today.

The British Iranian journalist has indeed earned her right to be among CNN’s 10 most popular tv hosts. Finally, our version of her life story is a breakdown of Britannica’s version of Amanpour’s Biography.

Kindly place your comments or contact us if you see something that doesn’t look right in this article. Otherwise, tell us what you think about Christiane.