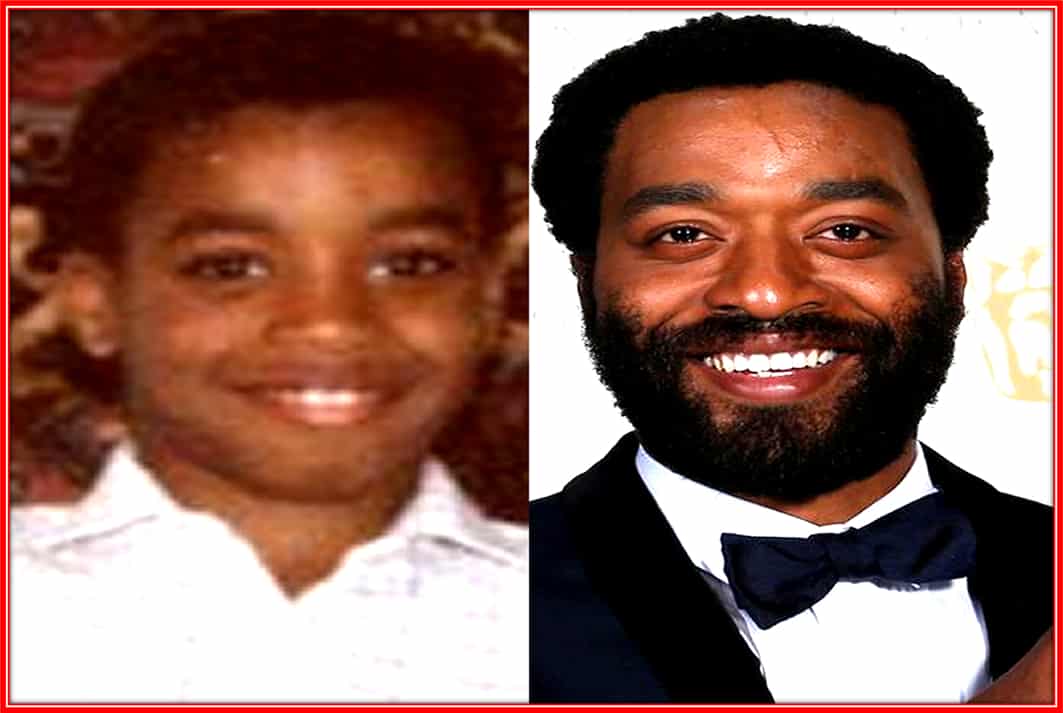 In the nutshell, this is a Life Story of the South Korean footballer, from his boyhood days, to when he became famous.

To whet your autobiography appetite, here is his childhood to adult gallery — a perfect summary of Chiwetel Ejiofor’s Bio.

Yes, everyone knows he is one of the most versatile film actors in the world. However, not many know of Chiwetel Ejiofor’s life story, which we have done well to tell here in an interesting manner. Now, without further ado, let’s begin.

For Biography starters, Chiwetel Umeadi Ejiofor was born on the 10th day of July 1977 at
Forest Gate in London, England. He is one of 4 children born to his mother, Obiajulu Ejiofor, and to his father, Arinze Ejiofor.

The British-Nigerian is purely of Igbo ethnic group that can be found in Eastern-Nigeria. He grew up in London alongside an older brother as well as two younger sisters, Zain Asher and Kandibe Ejiofor.

Young Ejiofor had a blissful childhood for the first 10 years of his life while growing up in London.

The then kid didn’t grow up in lack, neither did he have reasons to think deeply about what life meant and the purpose of his existence.

It suffices to note that Ejiofor’s formative years were not any different from those of other kids whose parents were upper-class residents of London. His dad was a doctor, while his mom was a pharmacist.

At this juncture, it is worthwhile to note that Chiwetel Ejiofor’s parents were immigrants who came to London during the Nigerian civil war also known as the Biafran war.

Notwithstanding, the home was where their heart really was. As such they often made visits to Nigeria during holidays.

By the time the youngster was 11 years old, he and his father were on a trip to Lagos state in Nigeria after attending a wedding in the country.

Unfortunately, the car they were travelling in had a head-on crash with a lorry. Ejiofor did survive the crash with scars that can be seen on his forehead. Sadly, his dad never made it out of the car alive.

Upon recovering from the shocking death of his father, Ejiofor began to exhibit a previously unseen passion for making the most out of life.

The development saw him develop an intense drive to become an actor when he was only 13 years.

To that end, Ejiofor became an active participant in school plays during his studies at Dulwich Prep London and later Dulwich College.

Did you know that the budding actor went on to join the National Youth Theatre and got into the London Academy of Music and Dramatic Arts? However, he left the latter after his first year with a view to pursuing a career in acting.

He slowly began by getting gigs for stage performances. Notable among them was his title role in the play, ‘Othello,’ at the ‘Bloomsbury Theatre,’ in London.

The acting prodigy also did perform at the ‘Theatre Royal,’ in Glasgow in 1996 before making his film debut with the TV movie ‘Deadly Voyage’ also in 1996.

The turning point of Ejiofor’s career came just a year later in 1997 when he made his entry into ‘Hollywood’ by playing the character of ‘James Covey’ in the movie ‘Amistad.’

Although Ejiofor’s character wasn’t epic in the film, his performances were nonetheless worthy of notice.

2013 was unarguably the best year of Ejiofor’s career. To be precise, 2013 was the year in which Ejiofor did perform the best role of his career by playing the character of ‘Solomon Northup,’ in the movie, ‘12 Years a Slave.’

The movie became a huge success with many commending Ejiofor for the manner in which he played the role in the most convincing manner.

As such, he won his first ‘Academy Award’ nomination for Best Actor in the movie. The rest, as they say, is history.

Away from his on-screen endeavors, fans and curious minds have no problems with knowing Chiwetel Ejiofor’s girlfriend at any particular point in time even as the actor tries hard to keep that department private.

He is known to have been in a relationship with Naomie Harris (2000 – 2007) and was rumoured to have dated Lupita Nyong’o in 2012. He is also known to have had a romantic stint with Canadian actress Sari Mercer.

Fast forward to May 2020, Chiwetel Ejiofor’s girlfriend is Australian actress Frances Aaternir. The lovebirds began dating in 2015 and have made several public appearances.

The actor has no interest in having sons and daughters at the time of writing, and neither does he talk about walking down the aisle.

What do you know of Chiwetel Ejiofor’s parents, sisters and brother? do you you know that they are the inspiration behind his success? sit back as we unravel facts about the actor’s family members.

Arinze Ejiofor was Ejiofor’s dad. He is known to be a talented musician turned medical doctor. He was only 39 years old when he died in a road accident which his son fortunately survived.

A close study of Arinze’s physiognomy would reveal that he shares a striking resemblance with his celebrity son.

There is no ruling out the fact that the duo had a close father-son relationship before death separated them.

Ejiofor’s mom is Obiajulu Ejiofor. She is a pharmacist who used to contribute backing vocals to her husband’s songs. The songs were West African pop with a bit of Afrobeat.

Obiajulu had a pharmacy store where she did work long hours to sustain the family after the death of her husband. She also did start a school – Brightland International Academy in Enugu Nigeria to educate kids with poor background.

Little wonder she has a special place in the heart of Ejiofor, who never miss an opportunity of telling her how much he loves her.

As we did earlier note, Chiwetel has an older brother as well as two younger sisters – Zain Asher & Kandibe Ejiofor. Not much is known about the older brother, but we do know that his sisters are also prominent individuals.

To start with Zain, she was born on the 27th day of August 1983 in London. She is a renowned Journalist who plies her trade with CNN. What’s more, she is married to Steven Peoples and they have a son together.

On her part, Kandibe followed the paths of Chiwetel Ejiofor’s parents in medicine. She is a skilled medical doctor, a married woman as well as a mother.

Her husband is Dele Arogundade. They tied the knot in January 2016 and have a daughter together known as named Amara Sade.

Moving on to Chiwetel Ejiofor’s siblings and relatives, not much is known about his grandparents, aunts, and uncles.

Neither are there records of his cousins. But we do know that Amara Sade is his niece while Dele Arogundade is his in-law.

We’ve done well to tell you about Chiwetel Ejiofor’s girlfriend, childhood story, facts leading to his rise to fame as well as his relationship life.

How about the nature of his character outside the world of acting? sit back as we unravel facts about his persona.

To start with, Ejiofor’s persona is similar to those of individuals born under the Cancer Zodiac sign. He is emotionally in tune, confident, analytical, and open to revealing facts about his personal and private life.

Asides from acting, Ejiofor loves sailing, reading books, and watching movies, among other interests and hobbies.

Do you know that Chiwetel has an estimated net worth of $12 million at the time of writing this biography? The origin of the actor’s wealth stems from his on-screen endeavors as well as other contributing sources that he is yet to make known.

Thanks to his huge wealth base Ejiofor has no problems spending big to live a luxurious lifestyle like other black Hollywood stars – Will Smith & Denzel Washington.

Although not much is known about the actor’s house in London, we do know that he rides expensive cars.

To wrap up our Chiwetel Ejiofor’s biography, here are lesser-known or untold facts about the actor.

Do you know that Ejiofor was in 2008 appointed Officer of the Order of the British Empire by Queen Elizabeth II?

The award was in recognition of his services to the arts? years later he was elevated to Commander of the Order of the British Empire during the 2015 Birthday Honours.

Chiwetel is big on charity and has undertaken numerous charitable works in Nigeria. What more? he is a recipient of the ‘Global Promise Award’ by ‘GEANCO Foundation for his social works.

Not many know that Ejiofor does prepare a lot before movie shots. The development explains why he is known as a versatile actor.

Do you know that before the actor appeared on 12 years a slave, he did learn how to pick cotton and how to play the violin? He did also practice a lot of difficult physical jobs with a view to appearing real in the movie.

Chiwetel Ejiofor shares the same birth year – 1977 with stars like Orlando Bloom, Shakira, and Michelle Gellar. Interestingly, 1977 was the year when epic entertainment films like A Star Is Born, King Kong, and Annie Hall hit cinemas.

Thank you for reading this interesting piece on Chiwetel Ejiofor’s biography. At ChildhoodBiography, we pride ourselves on delivering biography facts with accuracy and fairness.

Asides from Chiwetel Ejiofor’s bio, we’ve got other interesting Childhood Stories to whet your autobiography appetite. That of Larry Page and Jack Dorsey would excite your reading pleasure.

Have you seen something that doesn’t look right? Please don’t hesitate to contact us or leave a message in the comment box.