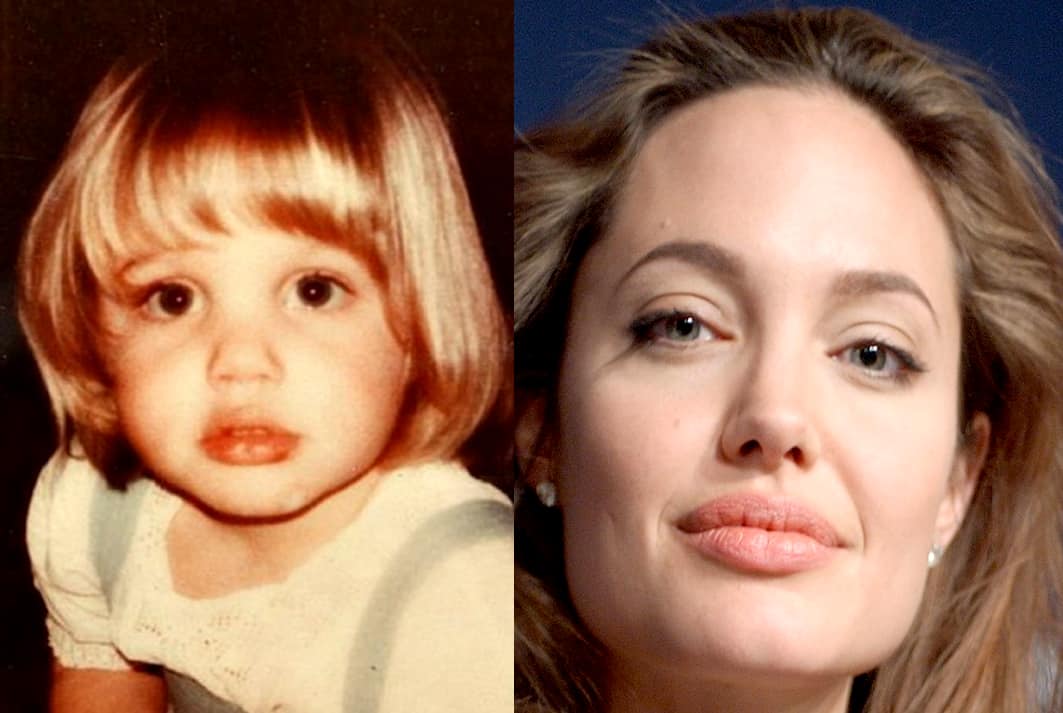 CB presents the Full Story of an American actress who is best known by the nickname “Angie”. Our Angelina Jolie Childhood Story plus Untold Biography Facts brings you a full account of notable events from her childhood time to date. The analysis involves her life story before fame and family background. More so, many OFF and ON-Screen little-known facts about her.

Yes, everyone knows of her decades-long film career. However, only a few consider Angelina Jolie’s biography which is quite interesting. Now, without further ado, let’s begin.

Angelina Jolie Voight was born on the 4th day of June 1975 at Los Angeles, in California, United States. 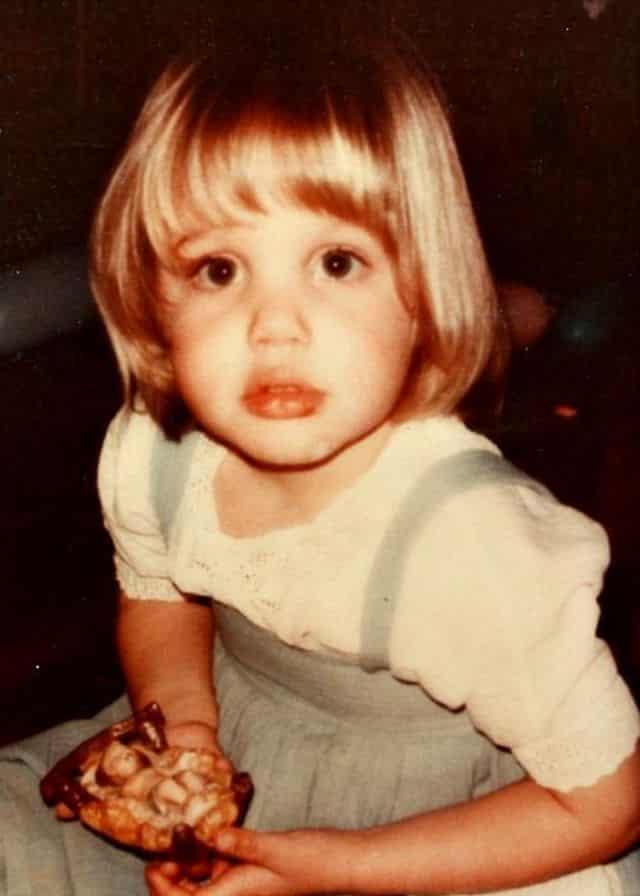 She was the second child born to her mother Marcheline Bertrand (an actress) and to her father Jon Voight (an actor). 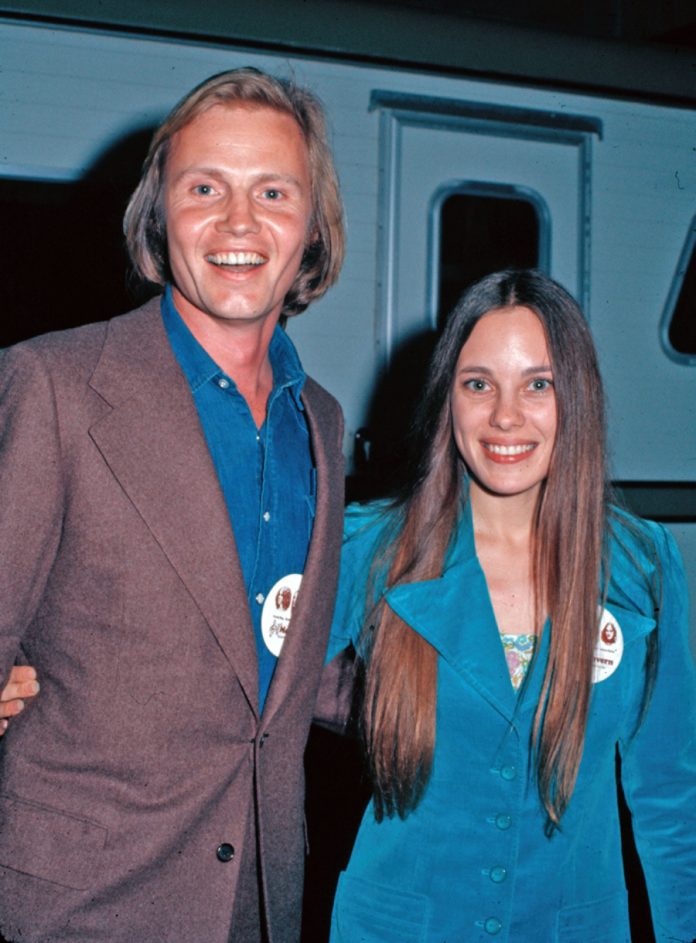 Shortly after her birth, Jolie was single-handedly raised by their mother who split with her husband due to his extra-marital affairs.

“Before Angie was born her mother became convinced that her husband Jon was having an affair with a young drama student  called stacey. It broke her heart and made the atmosphere in the house very tense before the couples went seperate ways”.

Bertrand later moved with her kids to Palisades, a town in New York where young Angelina grew up and spent a part of her formative years with her elder brother, James Haven. 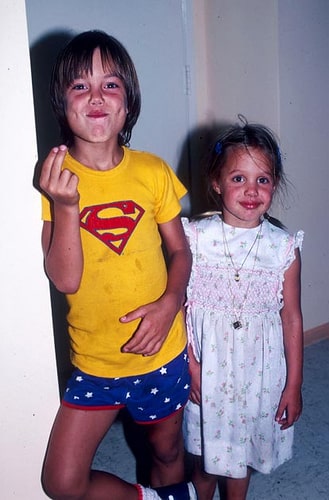 New York at the time was a city struggling with transformation in the midst of economic collapse and rampant crime. However, the Twin Towers pointed towards a brighter future for the city’s inhabitants of which Jolie’s little family were not an exception.

While living in New York Jolie was increasingly drawn to movies and had a penchant for acting. In fact, the last was yet to be seen of Young Jolie who made her screen debut as a child alongside her father, Jon Voight (before moving to New York) in Lookin’ to Get Out (1982). 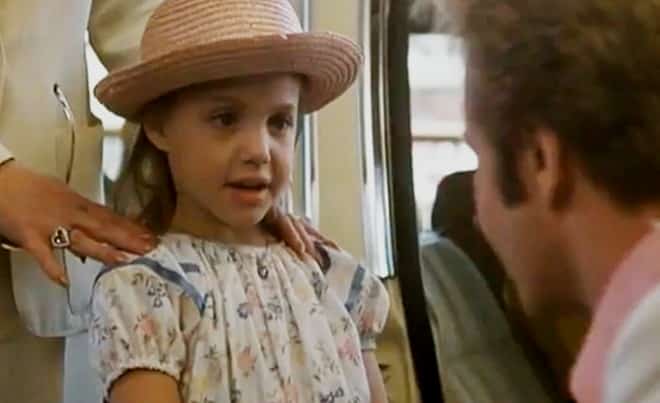 Jolie’s family returned to Los Angeles when she was aged 11. First stop on her educational progress was her enrollment at the Lee Strasberg Theatre Institute where she studied for two years and made appearances in several stage productions. 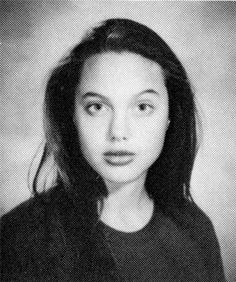 She thereafter attended Beverly Hills High School where she was known to have exhibited mental disorders due to her long battle with self-confidence. To make matters worse, the then skinny and freakishly tall girl wore second-hand clothes and was teased by her peers. 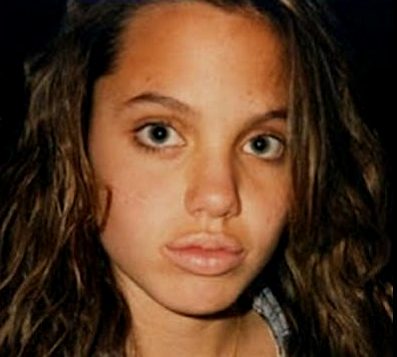 A transfer to Moreno High School did little to rid Jolie of her psychological problems/mental disorder as she became notorious for acts that include cutting herself with knives, dressing in all black and matching the eccentric persona with taking lessons on embalming in order to become a funeral director. 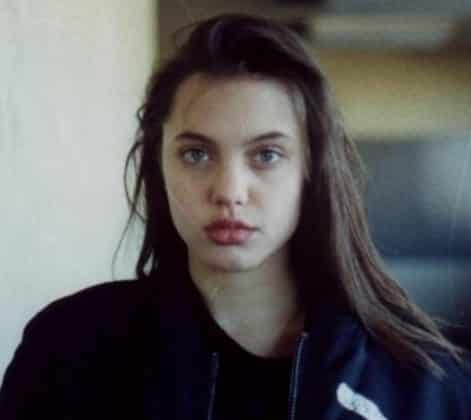 In addition, she lived with a boyfriend for 2 years as well as compounded her problems with drugs. Decades later, Jolie would confess to experimenting with drugs until 20, adding that it was a miracle that she survived those years:

“just being a young girl who was experimental, bold and a bit nutty… I was absolutely self-destructive. I think a lot of young people in this business lose their way. You don’t know what is of value. You don’t know where you are. And you know something’s wrong, because it isn’t life as it actually is. It’s like living in some warped reality.”

The year 1991 brought good tidings for Jolie who graduated high school and rented her own apartment. By this time, She had already made up her mind to be irrevocably committed to acting after her failed attempts at modelling. 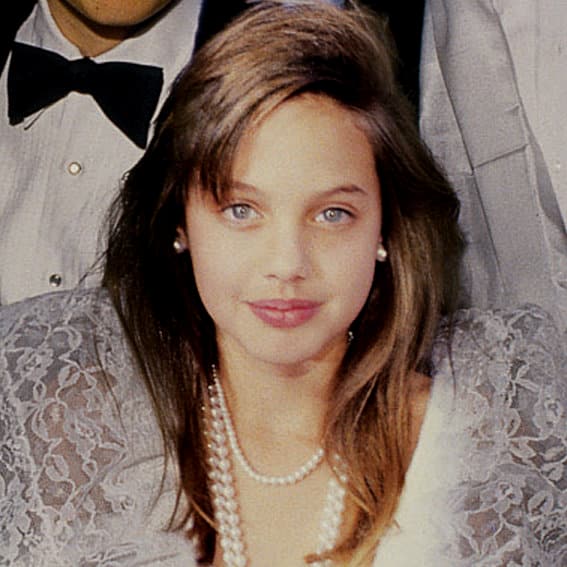 It wasn’t long before she began her professional film career in 1993 when she played a lead role in the sci-fi film ‘Cyborg 2’. Subsequent professional screen endeavours saw Jolie assume several roles in films of which her first Hollywood picture, Hackers (1995) stands out. 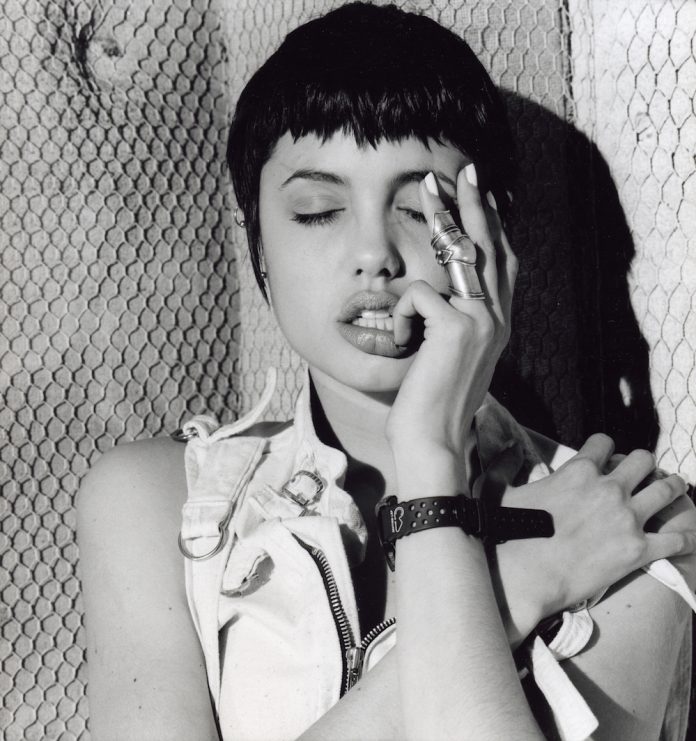 Jolie recorded initial success in 1997 when she won her first Golden Globe Award for her performance in ‘George Wallace’ (1997). Determined not to rest on her oars, she leveraged on her dark past to play a heart-wrenching role in HBO’s Gia (1998) which fetched her a Golden Globe award for the Best Actress. 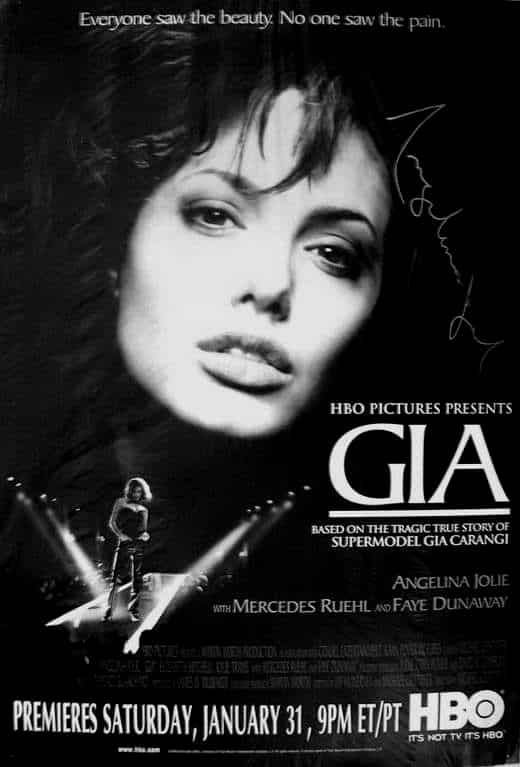 However, her biggest breakthrough came the next year in 1999 when she won an Academy Award for Best Actress in Girl, Interrupted (1999), an adaptation which also fetched her a third Golden Globe Award and second Screen Actors Guild Award. The rest, as they say, is history. 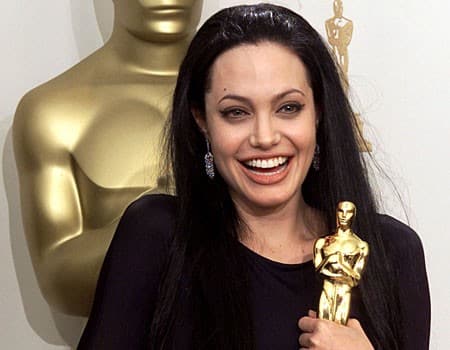 Jolie is one among a few American celebrities that have been married thrice. We bring detail about her marriages.

Marriage With Johnny Lee Miller: First among Jolie’s threefold conjugal ties was her marriage to Jonny Lee Miller, a Briton and on-screen colleague whom she met on the movie set of Hackers (1995). 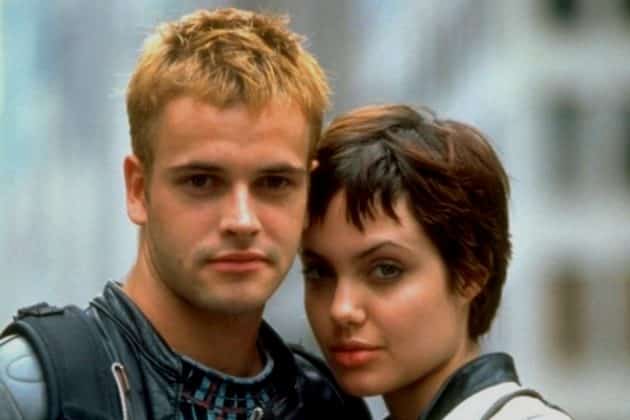 The duo wasted no time in getting married months later. However, their marriage hit the rocks a year after as they got separated and finally signed divorce papers in 1999. They remained best of friends and years later describe their ill-advised decision to tie the knot as “the mistake of youth” 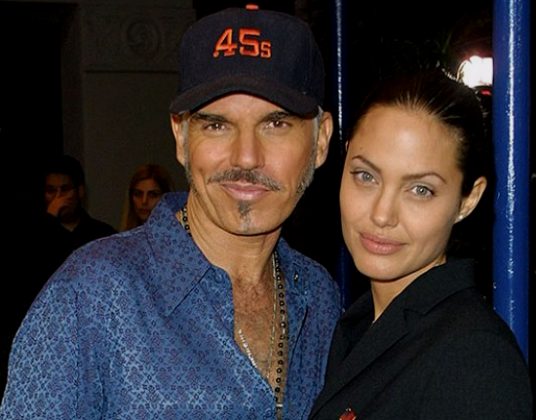 They got married in 2000 only to divorce after 3 years, a two improvement on her former marriage.

“It took me by surprise, too, because overnight, we totally changed. I think one day we had just nothing in common. And it’s scary but … I think it can happen when you get involved and you don’t know yourself yet.”

Jolie admitted about their sudden dissolution.

Jolie who seems to have a penchant for falling in love with actors plied her trade once more on movie set with Brad Pitt during the making of Mr. and Mrs. Smith in 2004. Pitt was at the time married to a movie star Jennifer Aniston (pictured with him below), a union which was brought to end in 2005 because of his affairs with Jolie. 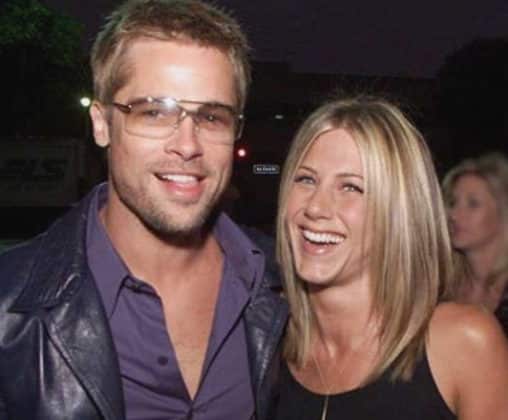 Brad Pitt and Angelina Jollie, referred to as “Brangelina” became a popular pair in Hollywood and were much talked about in tabloids. 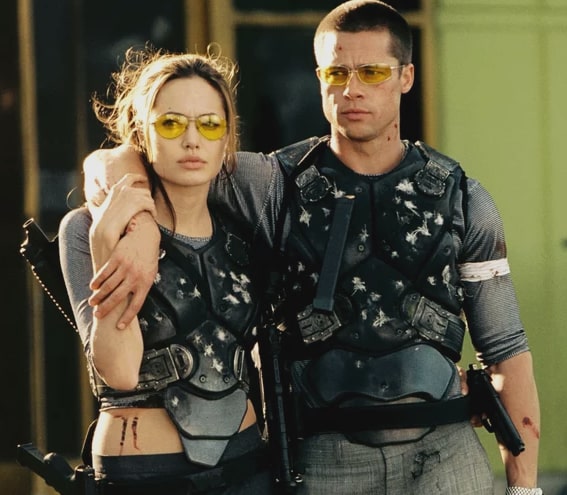 Their relationship gave rise to the birth and adoption of many children. First was Pitt’s decision to fill the paperwork of two kids; Maddox (boy) and Zahara (girl) adopted by Jolie from Cambodia (2002) and Ethopia (2005) respectively. 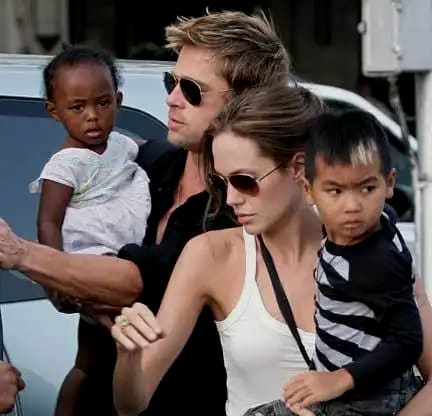 The couple then had their first biological daughter Shiloh Nouvelle in 2006. First photos of the celebrity baby who was born in Namibia was sold to “People!” and “Hello!” for a record amount of 10 Million dollars!. 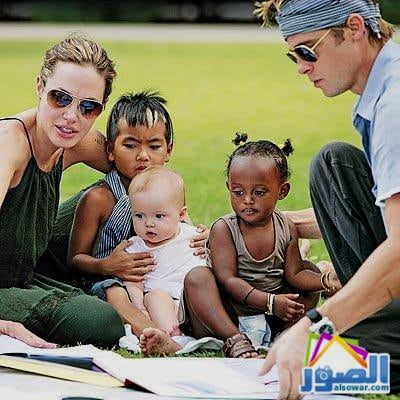 Added to the list of their adopted children was a Pakistan Boy Pax Thien who joined the family from an orphanage in March 2007. 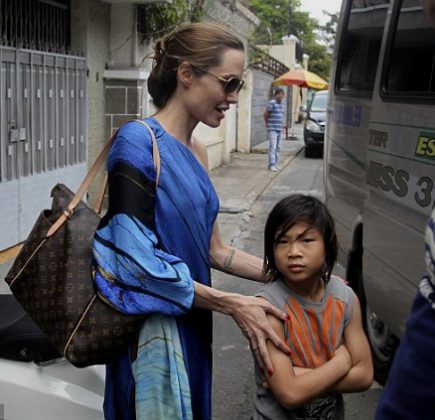 A year after, the couples gave birth to the twins – Knox Leon and Vivienne Marcheline in a clinic at Nizza on the 12th of July 2008. In line with celebrities babies trend, American magazines paid a whopping sum of 14 million dollars all in a bid to secure exclusive rights of publishing first photos of their twins. 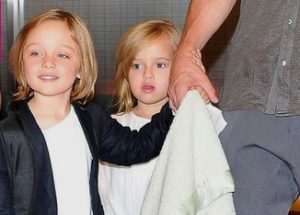 The Couple finally got engaged in 2012 after which they got married on the 23rd of August 2014 in France. 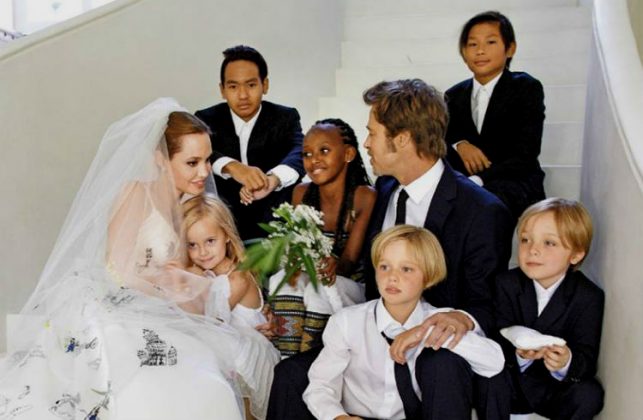 On September 19, 2016, Jolie filed for divorce from Pitt, citing irreconcilable differences. The couple filed for divorce following an incident on a plane when Brad allegedly lost control of himself and clashed with son Maddox who was 16 years at that time.

Joile spoke out about the divorce for the first time in February 2017 by noting that:

“I don’t want to say very much about that, except to say it was a very difficult time and we are a family, and we will always be a family. We will get through this time and hopefully be a stronger family for it.”

In August 2017 it was reported that the divorce had been “put on hold” and that they were even planning to get back together. But in April 2018, The Sun exclusively revealed that the divorce settlement has been finalised and Brad has been allowed access to the children. 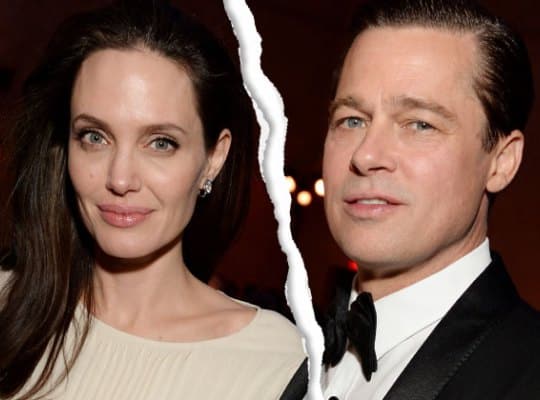 Jolie was born into a family of four. We bring you factual details about her Family.

About Her Mother: Jolie’s mother, Marcheline Bertrand was once an actress who abandoned her acting career in order to focus on raising her kids. Bertrand had a close relationship with her once eccentric daughter whom she recommended to take up modelling classes after acting once failed to restore her confidence. 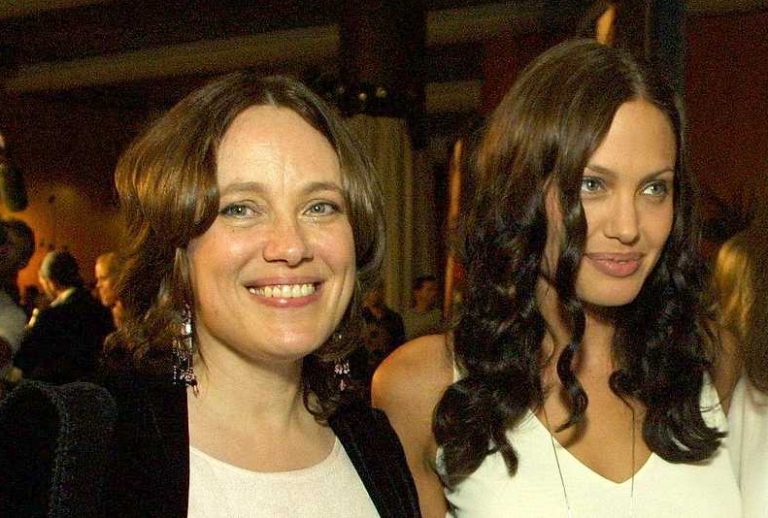 She sadly died of ovarian cancer on the 27th of January 2007. Until her death, Bertrand was a peace-loving woman who stood by her kids and supported their acting careers.

About her Father: Jolie’s father, Jon Voight is a veteran actor who clinched academic awards for his role in the movie ‘Coming home’. Jon has been instrumental to Jolie’s love for acting including facilitating her screen debut as a child in Lookin’ to Get Out (1982). However, the duo recorded long years of ill feelings owing to Jolie’s troubled adolescence. So much was Jolie’s psychological problems that she cut off Voight from her last name however her father gave it back.

Their relationship only improved after Jolie’s was cured of her disorders and they have remained in good terms ever since. 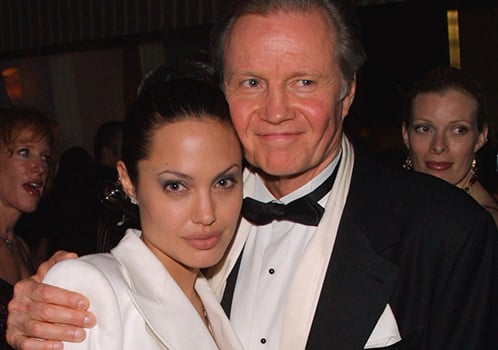 About her Brother: Jolie’s brother, James Haven is an American actor and producer. James  shares a strong bond with Jolie who upon winning her Oscar, kissed her brother on the lips and said, “I’m so in love with my brother right now.” The gesture sparked rumours of incest however, Jolie dismissed the claims by explaining that she and James relied on one another for emotional support, owing to the fact that they were victims of broken homes.

Angelina Jolie, like Conor Macgregor, has many prominent body arts. We bring you a comprehensive image highlighting a few of her numerous tattoos and rationale behind them. 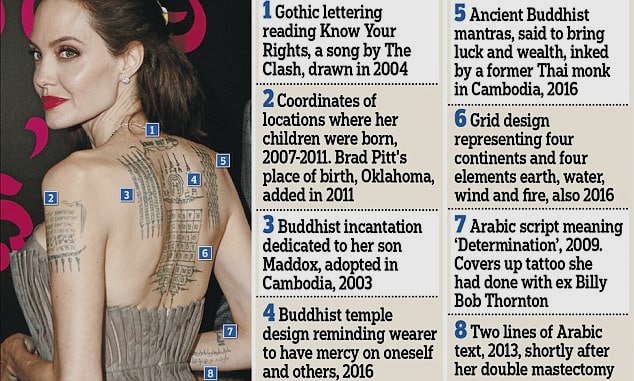 Angelina Jolie has the following traits to her personality;

Proactive: This is evidenced in the manner which she took steps to prevent the incidence of suffering from breast and ovarian cancer. The actress whose maternal parents and relatives have a history with the oncology underwent bilateral mastectomy (removal) and had reconstructive surgery on her breast in 2013. Two years later, she had her ovaries removed in 2015. 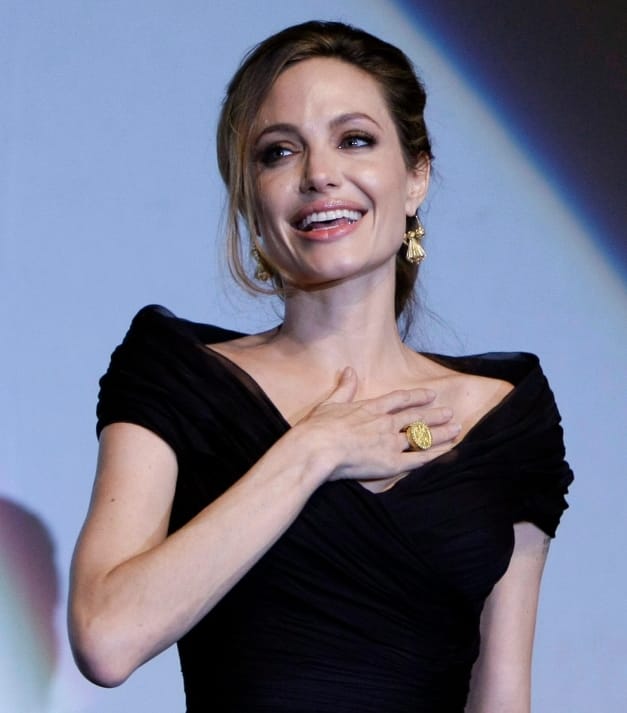 Charitable: Jolie had a first-hand experience of the poverty and sufferings in third world countries while shooting the movie  “Lara Kroft: Tomb Raider” in Cambodia. Her quest to help alleviate the sufferings saw her become the Goodwill Ambassador of the UN and was In 2004, conferred with a honorary Cambodian citizenship by the prime minister of the country. 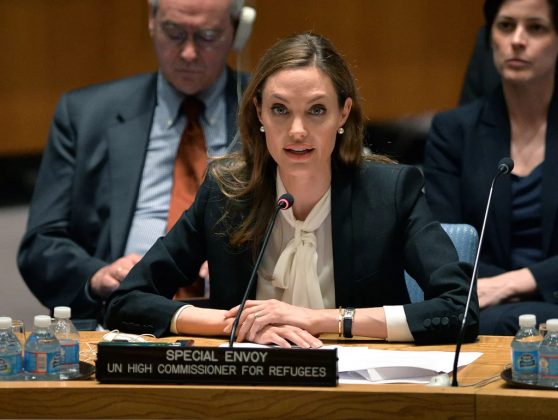 Jolie also have established charity organizations including Maddox Jolie-Pitt Foundation,  Maddox Chivan Children’s Center for the HIV-positive children in Phnom Penh, as well as Education Partnership for Children of Conflict and for children affected by natural and technogenic disasters.

Weaknesses: On the flip side, Jolie is often indecisive, prone to depressions and has trust issues. 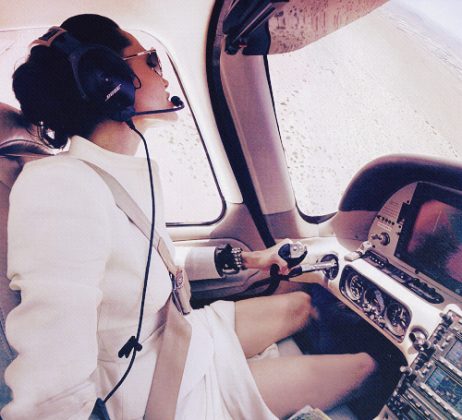 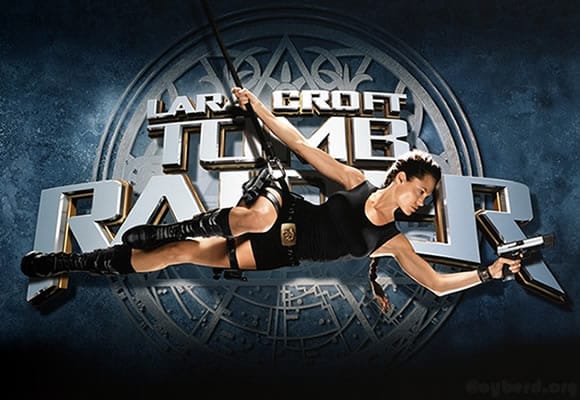 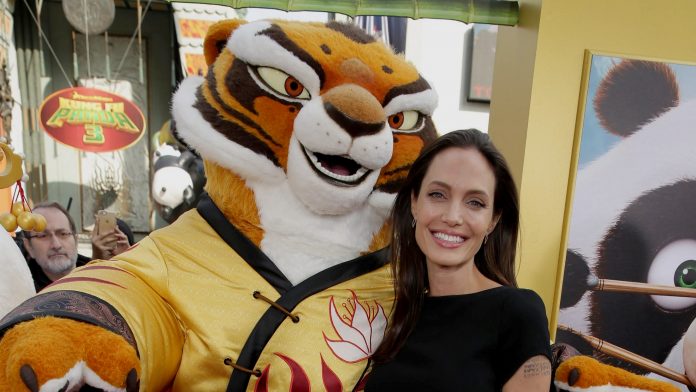 FACT CHECK: Thanks for reading our Angelina Jolie Childhood Story plus untold biography facts. At ChildhoodBiography, we strive for accuracy and fairness. If you see something that doesn’t look right in this article, please place your comment or contact us!