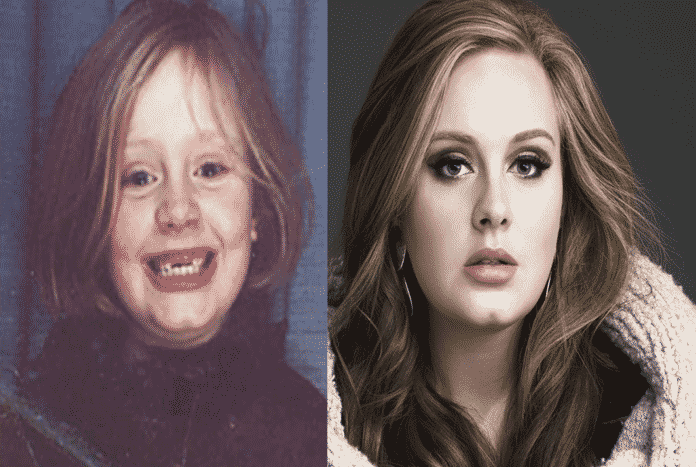 Childhood Biography presents the Full Story of a Celebrity who is best known by the Stage name ‘Adele‘.

Our Adele Childhood Story plus Untold Biography Facts brings you a full account of notable events from her childhood time till date.

The analysis involves her life story before fame, family life and many OFF and ON-Screen little-known facts about her.

Yes, everyone knows about Adele’s on-screen personality, but few consider her off-screen life which is quite interesting. Now, without further ado, let’s begin. 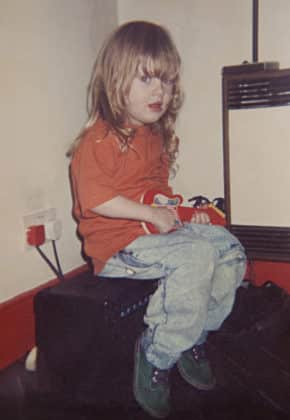 She was the only child of Penny Adkins, an “arty mom” who was just 18 at the time of her birth, and a Welsh father, Mark Evans, who left the family when Adele was only 4 years old.

Adele grew close to her mom, who encouraged her young daughter “to explore, and not to stick with one thing.”

Around the age of 10, she moved to South London. While clearly bright, Adele wasn’t oriented towards traditional classroom settings. She didn’t enjoy school until she was 14 years old. She never adored the reading part.

Instead of dropping out of school, her mother enrolled her in the BRIT School for Performing Arts & Technology. This was to make her have more fun than reading.

While at school, Adele cut a three-track demo for a class project that was eventually posted on her MySpace page.

When executives at XL Recordings heard the tracks, they contacted the singer and, in November 2006, just four months after Adele had graduated school, they signed her to a record deal. The rest, as they say, is now history.

Mark Evans left Adele’s mother when Adele was only three. He could only remain in contact with his daughter only up until her teen years.

His problems with alcohol and increasing estrangement from his daughter caused their relationship to deteriorate. 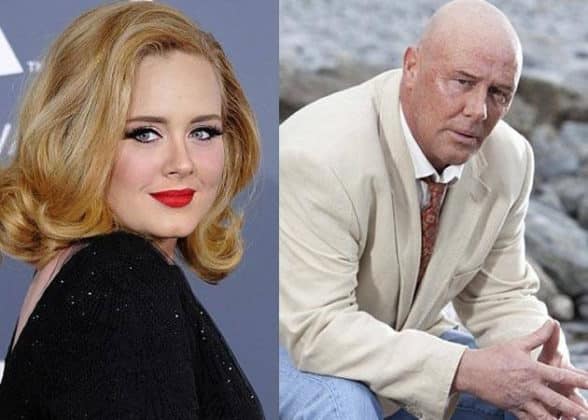 Evans currently lives in Cardiff, Wales, where he works as a plumber.

Penny was just 18 when she became unexpectedly pregnant with Adele. She was actually an art student at the time but had to drop out of college to raise Adele.

According to Adele, “She fell pregnant with me when she would have been applying for uni, but chose to have me instead.” 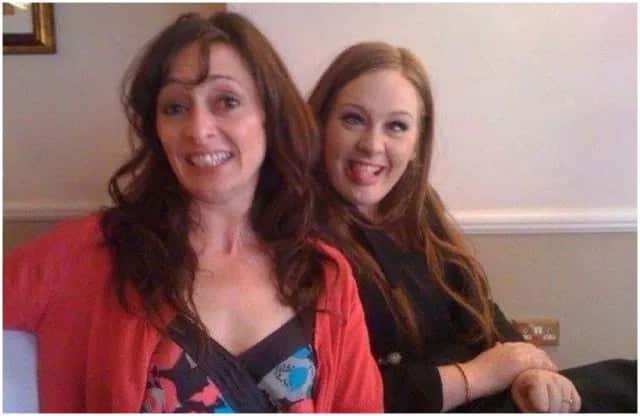 Penny has been of great support to her daughter Adele, inspiring her to greater feats. She has been referenced in several of Adele’s songs, most notably “Hometown Glory,” “Million Years Ago,” and her cover of The Cure’s “Lovesong.”

On June 29, 2012, Adele announced on her website that she was pregnant with her first child. The baby’s father is Adele’s boyfriend, Simon Konecki. 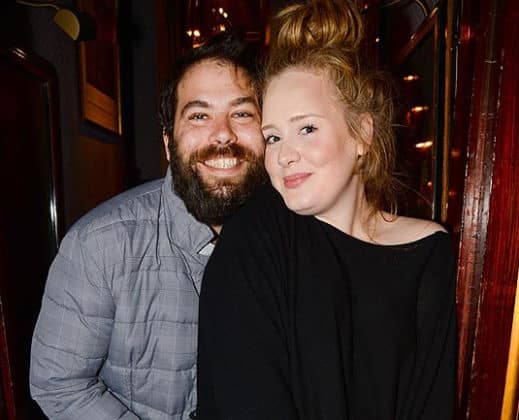 Adele spoke to People magazine about being a mother. In her words; “I really want to be a mum. I better start getting on with it!”. 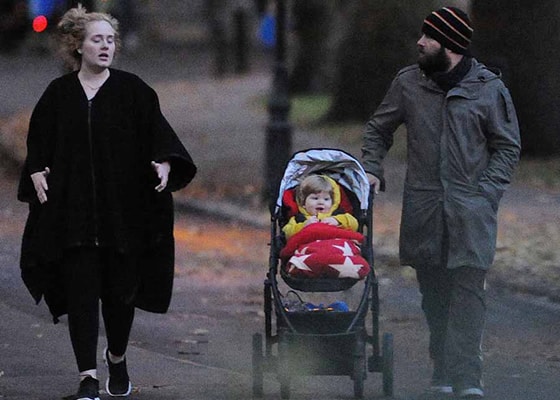 Adele and her husband Simon sued the paparazzi after they snapped pictures of their son Angelo during a family outing. They won the case in 2012 and were awarded damages.

Despite releasing some of the world’s most powerful music, Adele believes that giving up smoking has left her with a ‘weaker’ singing voice. 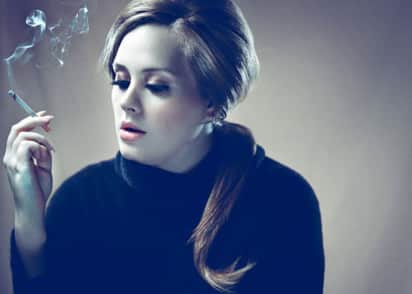 The chart-topping singer quit her smoking habit in 2011 in a bid to improve her health – but she fears she has damaged her voice in the process.

‘The people with the best voices, they always smoke. I’ve given up smoking and I’m convinced that’s made my voice weaker,’ the Hello hitmaker told Canada’s etalk.

Adele once admitted that as part of her new healthier lifestyle, she’s quit smoking – as she feared it would kill her.

‘If I’d carried on smoking I’d probably have died from a smoking-related illness and I think that’s really bad. If I wasn’t a singer I would still be smoking 25 sticks a day.

I feared my previous 25 cigarettes per day would kill me. So I had to stop for good.’

In 2011, Adele underwent throat surgery which her doctor blamed on her smoking habit.

Adele said that her goal in life is ‘never to be skinny’. She believes that music should be made for ears, and not for eyes.

Notwithstanding, she went on to work her weight out and the outcome was amazing. 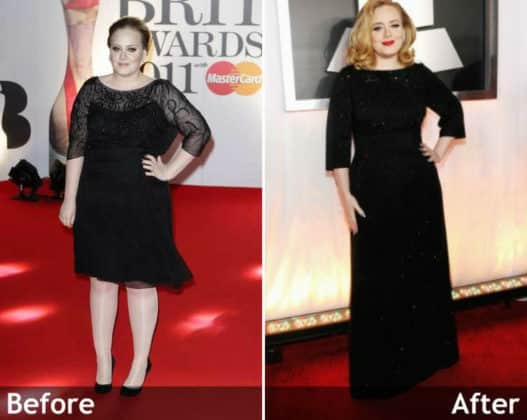 The singer doesn’t need quietness to compose some of her songs. in fact, she stated that her creativity is at its highest when she’s had a few too many to drink.

She could actually consume as much as 10 cups of hot beverage with two sugar cubes each in a day. 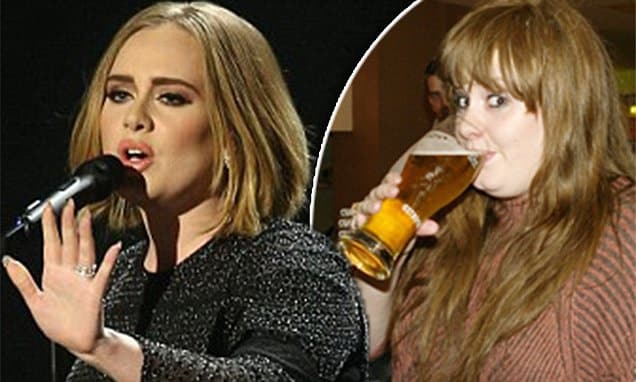 Adele today has a new testimony, ‘Now I don’t drink all that anymore and I have more energy than ever.’, said the Helo songstress.

Despite experiencing worldwide fame and audiences of thousands, she still suffers from stage fright and has said in the past that she sometimes has panic attacks and throws up backstage. 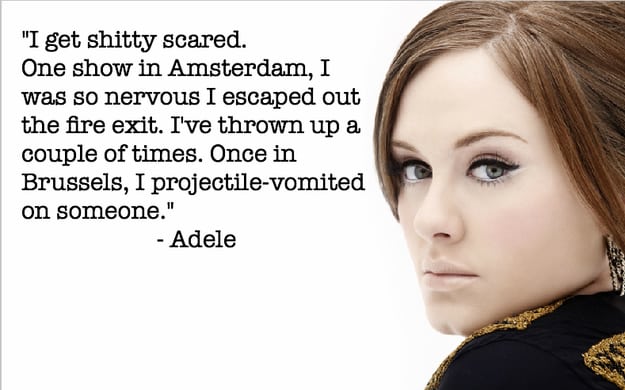 “There was no musical heritage in my family,” Adele told The Telegraph in a 2008 interview. 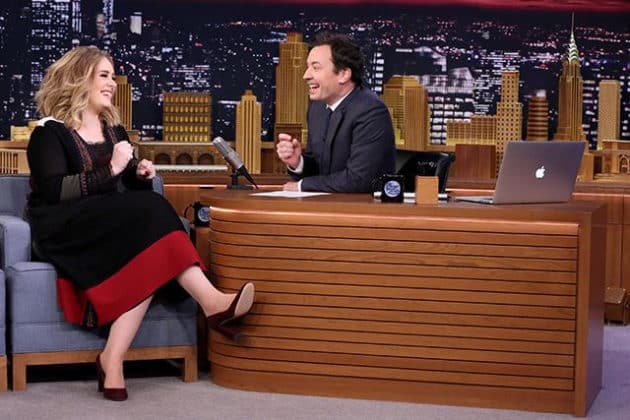 “Chart music was all I ever knew. So when I listened to the Ettas and the Ellas, it sounds so cheesy, but it was like an awakening.

I was like, oh, right, some people have proper longevity and are legends. I was so inspired that as a 15-year-old I was listening to music that had been made in the ’40s.

Thou, as stated earlier, Adele’s success stemmed from MySpace, the social media platform which her friend used to post Adele’s song project from school.

As of 2016, Adele held a total of 10 Grammy Awards and 3 Guinness World Records. Along with Beyonce, Adele holds the record for the most categories won in a single night at the Grammys. She took home a total of six awards in 2012. 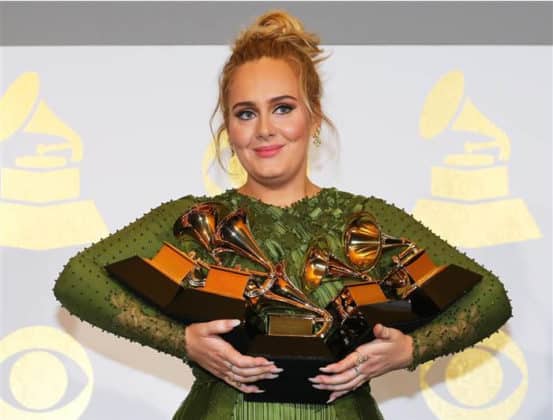 Adele came in sixth on Forbes’ list of highest-paid celebrities under the age of 30 in 2012.

In total, she has five tattoos. Two of them are on her left wrist, her hands each have one and there is also a tattoo behind her left ear. 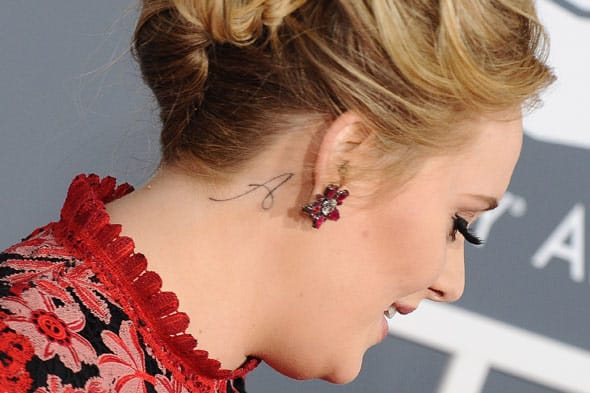 She suffers from homesickness when she is away from London and doesn’t like flying. 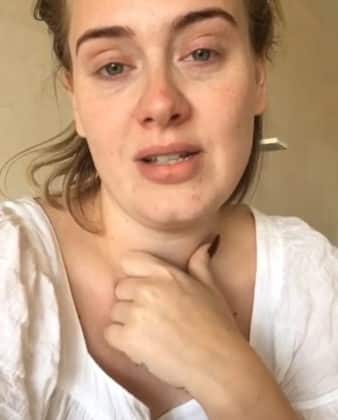 Her 2008 American tour was canceled because Adele wanted to spend time with an ex-boyfriend. She later regretted it and called herself ‘ungrateful’.

Adele is a Taurus and has the following attribute to her personality; 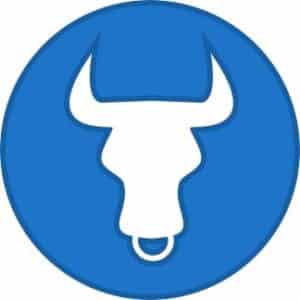 Thanks for reading our Adele Childhood Story plus untold biography facts. At ChildhoodBiography, we strive for accuracy and fairness to deliver you Top Singers’ Biographies. The Childhood stories of Shawn Mendes, Grace VanderWaal, and Olivia Rodrigo might interest you.